Silverlight 3 is here! (but is it a flash killer yet?)

Less than 24 hours ago Microsoft's MIX09 conference kicked of in Las Vegas with Silverlight 3 taking centre stage. For those of you who have followed the conference build-up, this comes as no surprise, with twice as many Silverlight sessions (31) advertised than any other technology (WPF has a measly 4!).

You didn't have to be at Las Vegas to feel the build up. The teams at Microsoft were working hard the day and night before with the quiet arrival of a new silverlight blog, the Silverlight 3 beta 1 API docs and most importantly the appearance of the Silverlight 3 SDK on the Microsoft download site. All carefully timed so that after Scott Guthrie made his announcement, developers around the world could get to work and spread the word.

Incidentally, this is the first time I have watched a MIX keynote and I wasn't quite prepared for what I saw! Scott Guthrie's arrival on stage was preceded by a comedy sketch involving Scott endorsing a Cola product, blind programming in a superhero costume, bear wrestling and disco dancing! 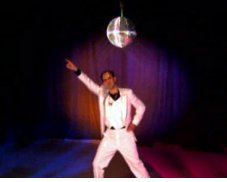 It would seem that Las Vegas is certainly the appropriate venue for this event which has far more glitz and glamour than any other technical conference you might attend. Anyhow enough of this digression ...

Yes, Silverlight 3 is here folks. But what does it all mean? The best place to get the cool-hard facts is Time Heuer's blog.

Probably the most hyped new feature is the capability for out of browser / offline experience, where a user can right click a silverlight application to install it into a local sandbox. This certainly puts a spanner in the works for JavaFX whose drag-and-drop deployment to the desktop seemed to be its only unique selling point. Incidentally, you can already see a demo of Silverlight 3 out-of-browser on Shaun Wildermuth's blog.

Other new features include a host of new controls, 3D support, deep linking and other search engine optimisations, Bitmap manipulation API, and other features familiar to WPF developers including validation, merged resource dictionaries and an improved binding framework (which renders my own ElementName binding implementation totally redundant!)

And all of this within a runtime that is now 40KBytes smaller!

I feel that the most of these new features, great though they are, will excite an audience who are already sold on the idea of Silverlight. I have talked to no end of developers who are just itching to get to work with the technology (myself included) but who are hampered by the fact that it is just not a viable option right now because their end users do not have the plugin.

Currently Silverlight penetration is low, just less that 25% according to current stats (if you can believe a site which uses Flash charts ;-). Currently it is video which is driving the consumer uptake of RIA technologies, with YouTube (with its flash player) currently the 3rd most popular site on the internet. If Microsoft are going to bring Silverlight to the masses, video is currenlty the way to do it.

Silverlight has already made some headway in this market, with the UK broadcasting company ITV using a Silverlight video player for their video-on-demand service, ITV catchup. However, disappointingly, the ITV decided to support both Silverlight and Flash video players, with people visiting the site without a Silverlight plugin still being able to watch video in Flash. This does little to help the push for Silverlight adoption.

More good new for Silverlight at the MIX keynote came from Perkins Miller of NBC who broke the news that coverage of the 2010 Winter Olympics in Vancouver would be available in HD online through a Silverlight player. Now let's hope Microsoft got an exclusive deal here!