This post looks at the speed of development of the two leading RIA frameworks, Silverlight and Flex, giving unequivocal proof that Silverlight is better than Flex ... !

This week at Microsoft's Professional Developers Conference (PDC), there have been two big news stories. The first is the give-away of a free tablet PC to all attendees, and the second is the release of Silverlight 4 beta. Whilst the first story is sure to grab the headlines, the second is far more significant, with official launch of Silverlight 3 having passed just 4 months ago.

There are many new features in Silverlight 4 including, printing support, improved databinding, new controls, improved mouse support, clipboard, drag'n'drop, and much much more. You can be sure that Silverlight 4 will receive a lot of blog coverage over the next few months, it is worth subscribing to Silverlight Cream to get a good overview of all blogging activity. (It looks like Shawn Wildermuth is not sleeping and has blogged about the improved SL4 databinding support already!)

While the new features are very exciting, what interests me more is just how fast Silverlight is developing. Time for a bit of analysis ...

Four months ago I took a detailed look at Silverlight adoptions figures, which I don't expect to have changed much since then. This time I want to look at the rate of development of the framework itself. The following chart plots the date at which major releases of some key RIA technologies were released (plus predicted release dates for SL4 and Flex4): 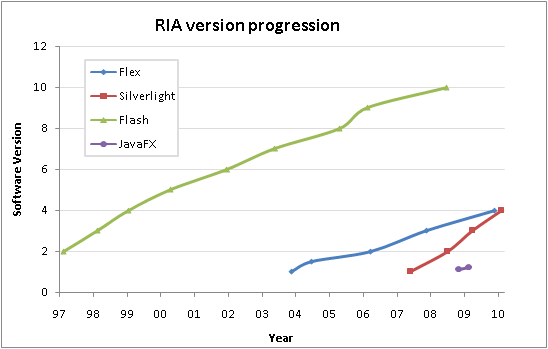 As you can see from the above chart Silverlight is being developed very aggressively with major versions being released with less than a year between them. Interestingly the above chart shows an almost constant development velocity for each RIA technology. Which leads me to the next chart ... 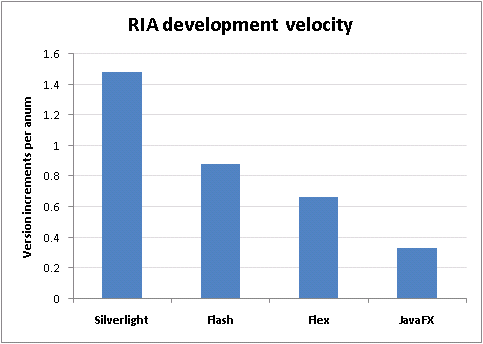 Here we can see that Silverlight development is occurring at a rate of 1.5 version increments per annum (VIPA [1]) , whilst Flex is lagging behind at 0.7 VIPAs ... and JavaFX just 0.3 VIPAs!

There you have it. Unequivocal proof that Silverlight is better than Flex.

[1] Hey look ... I've developed a new unit here. Do you think in years to come they might come to be known as Colins? Eberhardts?