The announced launch of Silverlight 5 has got the developer community all excited about improved media capabilities, MVVM support, printing and 3D, but how will Silverlight adoption evolve throughout 2011. In this blog post I look at historic data and use this to predict a 76% adoption of Silverlight 5 by the end of 2011.

The Silverlight Firestarter event last week (December 2nd 2010) saw Microsoft's Scott Guthrie use his keynote speech to announce the launch of Silverlight 5 which will emerge at some point in the first half of 2011. The new features, which my colleague Gergely details in a recent blog post, are geared towards media and business applications, which in my opinion is a good thing. This further re-enforces Silverlight's positions as a plugin for application development, making it easier to differentiate it from HTML5.

There are a couple of prominent sites that collect plugin adoption staticstics, riastats and StatOwl. Currently they give adoptions statistics for Silverlight of 67% and 58% respectively, with the difference between these values most probably being due to the demographic of the sites which they collect statistics from. StatOwl provides pretty detailed historic statistics, using this data the chart below shows the adoption of various Silverlight versions over the past couple of years: 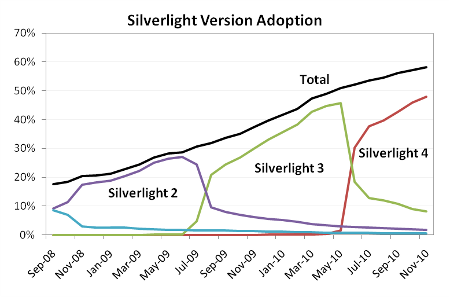 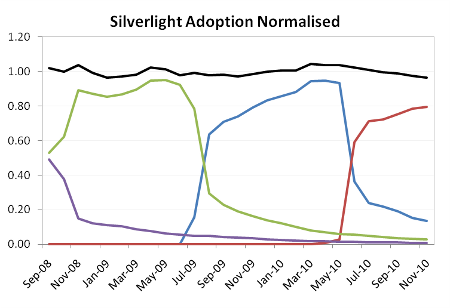 If I take a guess at the Silverlight 5 launch date, based on Scott's announcement that it will be in the first half of 2011, I can extrapolate the above chart to give the adoption curve for Silverlight 5: 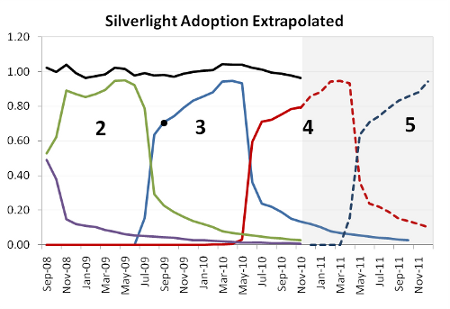 The shaded area in the above chart is the extrapolated future adoption. De-normalizing the above gives the following total adoption predictions: 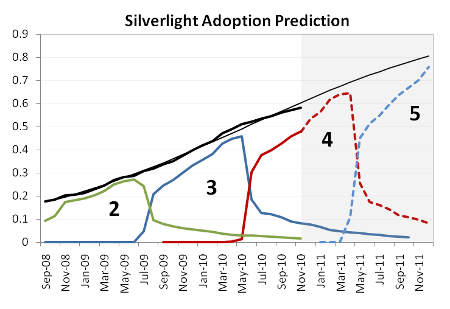 The above chart predicts that Silverlight 5 will have a 76% adoption by the end of 2011, and that the total Silverlight adoption will be 81%.

I will be interesting to see how good these predictions are!