Everything you wanted to know about databinding in WPF, Silverlight and WP7 (Part Two)

This is the second post in my series about databinding in Silverlight and WPF. In the first post I looked at how you wire-up UI controls to a model in the absence of a databinding framework. I showed how databindings can be created in code-behind, removing the need for the various event handlers that the manual method requires, resulting in more readable code, where the connection between a UI control and a model property is all in one place. In this blog post I'll look at how bindings can be defined in XAML, providing a more concise and flexible method of wiring model objects to your view.

The rough outline for this series is as follows:

And render it with the following UI: 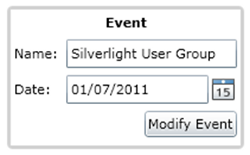 The XAML for the UI is as follows:

The previous blog post wired up the above UI by creating bindings in code-behind:

Most applications create bindings within the XAML markup ... and that is exactly what we shall do next!

It is quite unusual to see code which creates bindings in C# (code behind), this is because there is a simpler, more elegant way. Firstly, we'll change the code above to remove all of the bindings, and instead set the DataContext of the page to the event that we wish to edit:

Next we'll update the XAML, removing the names of the controls used to edit this event (we only named them so that they were accessible form code-behind), and adding bindings as follows:

Compiling and running this modified version of our code yields exactly the same result. The UI displays the initial values of the event, and the bindings take care of updating the UI if the model changes and updating the model based on user interactions with the controls. So let's take a closer look at how these binding work.

Within XAML, any attribute value that is surrounded in curly braces {...} is a markup extension. Whilst most of your XAML markup is simply used to construct controls and panels in order to assemble the visual tree of your application, markup extension inject extra functionality into the XAML parser. The Binding Markup Extension constructs a binding and associates it with the UIElement or FrameworkElement that the property belongs to.

As you might recall from the previous blog post, all bindings have a source object, source property, target object and target property:

How do these map to our XAML binding? Let's look at the various components of our markup:

However, there is something missing? Where is the source object? In our example above, where is the object that owns this Title property we are binding to the UI? If you recall earlier we set the DataContext property of our MainPage to the event class which is being edited ... this is our source object. The DataContext is a rather special property for a couple of reasons:

These two properties of DataContext and the binding framework result in a concise and elegant way to wire up your applications user-interface.

We'll explore a few other features of the binding framework via a more complex example, this time we have a model object, PersonModel, that has a relationship to another model object, AddressModel. A summary of these classes is show below (INotifyPropertyChanged implementation omitted for clarity):

Again, we create an instance of this class and set it as the DataContext of our user control:

Binding the Surname and Forename to the UI is straightforward, but how about the WorkAddress? The Path property of a Binding supports a special property path-syntax which has a dot notation for navigating relationships. We can bind our UI to the various properties of the Address as follows:

Which yields the following UI: 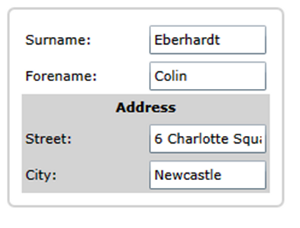 Now because Address implements INotifyPropertyChanged, if we change the Street or City of the object bound to the UI, the binding framework will take care of pushing this change to the binding targets (i.e. the TextBox instances). But, what if we replace the Address instance entirely? For example ...

The property-path syntax supports binding to arrays and dictionaries via indexers, for example:

I'm not going to give examples of all the various bindings that are possible, MSDN has a good reference for these.

In the previous example we had two bindings that navigated the relationship from Person to Address to bind to properties of the Address object. Instead of repeatedly navigating the same relationship, we can bind a 'region' of our UI to the WorkAddress property.

If you recall, the DataContext is inherited throughout the visual tree and is the default source for bindings. If we change the DataContext of a common root element of our various Address bindings to the Person.WorkAddress, we can simplify our bindings. We could set the DataContext in code-behind, but there is a more elegant way:

In the above XAML we are binding the DataContext of the Border element to the WorkAddress property of the Person instance (which was set as the DataContext of our UI in code-behind). As a result, all the children of the Border have the Address instance as their DataContext, so we can bind to the properties directly. This creates an 'island' within our UI that is bound to Address as shown graphically below:

We'll wrap up part two of the series on databinding by looking at a couple of variations in the binding syntax, the first is a 'longhand' version of the binding. Instead of using the binding markup extension, it is possible to create the binding instance in XAML, for example, the simple binding to Forename:

Can be expressed as follows:

This yields exactly the same result. What's the point in the longhand version? Good question, I have only used it occasionally myself, typically within multi-bindings, or where validation rules are being added.

If instead we want to make our bindings simpler, we can omit the Path and simply express the binding as follows:

Now there are some instances where you do not want to bind to a property of your source (i.e. DataContext), rather you want to bind to the source itself. The syntax for this is a single 'dot':

Or, in this case, we can use the very-very short:

We'll see some instances of when this might be useful in a future part of this blog series on binding when we look at collection-binding.

In this blog post we have looked at the binding markup extension and how this provides a concise mechanism for creating bindings. We have also seen how the DataContext, which is the default source for our bindings, plays a pivotal role in the Silverlight and WPF binding frameworks. Finally, we have seen how we can use bindings to 'switch' the DataContext in order to create binding 'islands' within out UI.

In the next instalment we'll look at some of the other ways we can specify the binding source and when you might use them, but now we'll take a well-earned break ... see you next time.

You can download the sourcecode for the examples described in this blogpost: DatabindingExamplesPartTwo.zip