This blog post describes the implementation of a gesture-based todo-list application. The simple interface is controlled entirely by drag, flick and swipe:

So far the application supports deletion and completion of tasks, but not the addition of new ones. I'll get to this in a later blog post!

Introduction - gestures, why don't we use them more?

I think it is fair to say that most Windows Phone applications (and mobile applications in general) have user-interfaces that are a close reflection of how we interact with a desktop computer. Mobile applications have the same buttons, checkboxes and input controls as their desktop equivalent, with the user interacting with the majority of these controls via simple clicks / taps.

The mobile multi-touch interface allows for much more control and expression than a simple mouse pointer device. Standard gestures have been developed such as pinch/stretch, flick, pan, tap-and-hold, however these are quite rarely used; one notable exception being pinch/stretch which is the standard mechanism for manipulating images.When an application comes along that makes great use of gestures, it really stands out from the crowds. One such application is the iPhone 'Clear' application, a simple todo-list with not one button or checkbox in sight. You can see the app in action below:

Interestingly, its use of pinch to navigate the three levels of menu is similar to the Windows 8 concept of 'semantic zoom'.When I first saw Clear - the clean, clutter-free interface immediately spoke 'Metro' to me! This blog post looks at how to recreate some of the features of Clear using Silverlight for Windows Phone, in order to create a gesture-driven todo application.

NOTE: All of the work on my blog is under a Creative Commons Share-alike licence. For this blog post I just want to add that I do not want someone to take this code in order to release a 'Clear' clone on the Windows Phone marketplace. This blog post is for fun and education, to make people think more about the possibilities of gestures.

I haven't followed the MVVM pattern for this simple application (I don't need to unit test or collaborate with a designer!), but have followed the standard approach of using databinding. Each item is represented by an instance of the ToDoItem class which has properties of Text, Completed and Color and implemented INotifyPropertyChanged. A collection of these items is bound to an ItemsControl in order to render the list:

The items control is template to host the ItemsPanel within a ScrollViewer, the default panel, a vertically-oriented StackPanel, is used here. The template to render each item is a simple Border, Grid and TextBlock. The code-behind iterates over the ToDoItem instances setting their Color property to produce a pretty looking gradient from red to orange, representing the priority of each item: 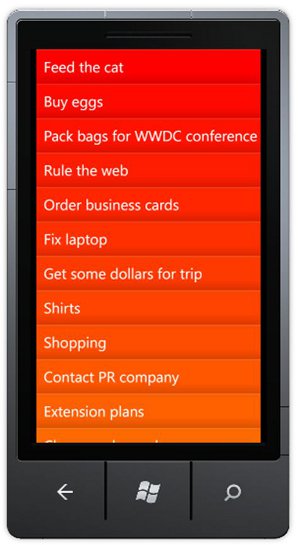 Silverlight for Windows Phone provides manipulation events which you can handle in order to track when a user places one or more fingers on the screen and moves them around. Turning low-level manipulation events into high-level gestures is actually quite tricky. Touch devices give a much greater control when dragging objects, or flicking them, but have a much lower accuracy for the more commonplace task of trying to hit a specific spot on the screen. For this reason, gestures have a built in tolerance. As an example, a drag manipulation gesture is not initiated if the user's finger moves by a single pixel.

Fortunately, the Silverlight Toolkit contains a GestureListener which handles manipulation events and turns them into the standard gesture events for you. Unless you need a quite fancy gesture (two-finger-swipe for example), the GestureListener probably gives you all you need. To use this class, simply attach it to the element that you want to handle gestures on, then add handlers to the events that the GestureListener provides.

We'll add a GestureListener to the template that is used to render each ToDoItem:

The events produced by the GestureListener are used to indicate that a user has dragged their finger across the screen, but they do not actually move the element that the listener is associated with. We need to handle these events and move the element ourselves:

But what are these mysterious methods, SetHorizontalOffset and GetHorizontalOffset in the above code? They are not found on FrameworkElement. The task of offsetting an element is reasonably straightforward via a TranslateTransform. However, once you set the RenderTransform of an element, it is converted to a MatrixTransform, so you cannot easily retrieve the value of the offset that has just been applied.

In order to hide this slightly messy implementation, I have created a couple of extension methods that use FrameworkElement.Tag to store the current offset:

Yes, I know, Tag is never an elegant solution, but at least the above code is hidden behind extension methods, so feel free to replace with a more elegant implementation using attached properties if you wish!

When the drag stops we want the item to bounce back into place:

Animate is another extension method which I created in order to quickly create DoubleAnimations for the properties of an element:

With the above code in place, we can drag items to one side or the other, then release and watch them bounce back into place.

When an item is dragged sufficiently far to the right, we'd like to have it marked as complete. To implement this, we'll check how far an item was dragged when the user releases their finger. If it was dragged more than half way, we'll mark the item as complete:

The bindings take care of updating the UI so that our item is now green. I also added a Line element which has its Visibility bound to the Completed property of the ToDoItem: 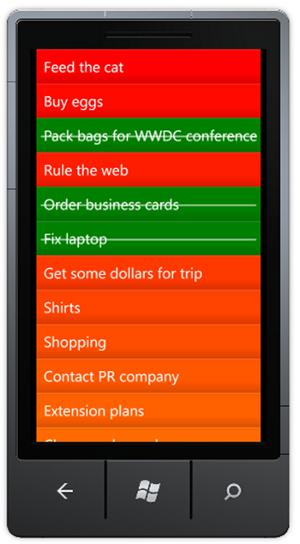 If instead the use slides the item to the left we'd like to delete it. The DragCompleted event handler can easily be extended to check whether the item was dragged more than half-way across the screen in the other direction. The method that performs the deletion is shown below:

There's actually rather a lot going on in that method. Firstly the deleted item is animated so that it flies off the screen to the left. Once this animation is complete, we'd like to make the items below 'shuffle' up to fill the space. In order to do this, we measure the size of the deleted items, then iterate over all the items within the current view, that are below the deleted item, and apply an animation to each one. The code makes use of the GetItemsInView extension method that I wrote for the WP7 JumpList control - it returns a list of items that are currently visible to the user, taking vertical scroll into consideration.

Once all the elements have shuffled up, our UI now contains a number of ToDoItems that have been 'artificially' offset. Rather than try to keep track of how each item is offset, at this point we force the ItemsControl to re-render the entire list. 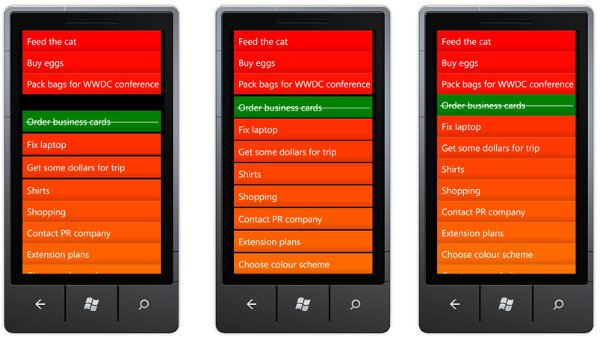