A Developer Perspective on Windows Phone 8 - An Update

My blog post from yesterday "A Developer Perspective on Windows Phone 8" sparked a bit of furious debate on Twitter. I think it is fair to say that I was not the only one who was quite concerned about the impact of aligning the developer experience of Windows Phone 8 with Windows 8. To quote Shaw Wildermuth "As a developer who's ported Windows Phone 7 to Windows 8 (WinRT), I can tell you it isn't a trivial task". 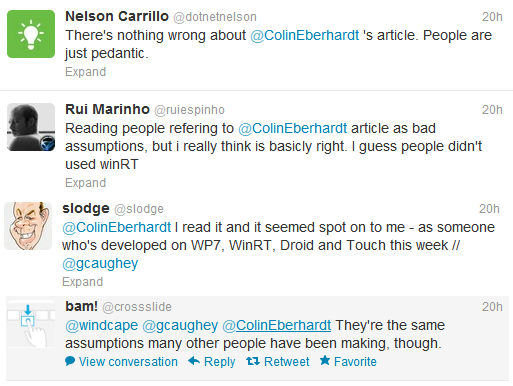 During the debate there were one or two that pointed out that the assumptions I, and many others, were making about WP8 being aligned to WinRT were incorrect. However, I think they were under NDA so could not say much more.

Shortly afterwards Cliff Simpkins, a Product Manager for WP7 at Microsoft, had this to say: 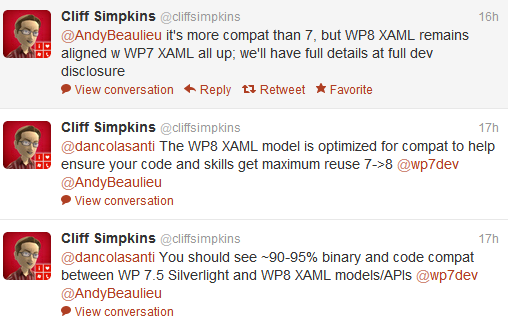 I also received a very nice email from Claus Jørgensen who said of migrating from WP7 to WP8 "Migration of your codebase will involve zero issues. The major hurdle will be to change old controls into new, better performing, controls. "

I am much happier about this all than I was yesterday. Whilst I am not entirely convinced, finding it hard to reconcile the information that moving code from Win8 to WP8 will be easy, whilst also moving code from WP7 to WP8 will involve zero issues, it does look like the process of transitioning from WP7 development to WP8 will not be too painful.

Also, I do feel that Microsoft needs to provide developers with a much clearer picture of what the future holds for them. I don't doubt that the skills we have fostered from WPF, to Silverlight, through to WinRT will serve us well for WP8 development. But skills are only one part of the story, much more important to me is our assets, the code that we have written. For my part, I have written around 80 blog posts (that's around 200,000 words!) on XAML technologies, and this was all just for fun! For clients, we have developed so much more. Any migration path has to consider this.

Anyhow, I'm going to stop worrying about WP8 and get back to blogging about what I enjoy most. Writing code. And yes, I am still developing for WP7.