An Introduction and Thoughts on Developing iOS Applications with MonoTouch

Colin Eberhardt is CIO at ShinobiControls, suppliers of highly interactive and fun charts, grids and UI controls for iOS developers.

With the rise in popularity of smartphones, tablets and the web as a platform, now is the time for developers to diversify and learn new skills. A few years ago, .NET was a dominant force, but recent statistics have shown a real drop in demand for .NET developers. I have been busy picking up new skills, mostly in HTML5-related technologies, but more recently I have been eyeing up iOS as a result of my work with ShinobiControls, which are an iOS UI component vendor.

Whilst the transition from .NET to HTML5 means learning new languages and frameworks, for the most part, the tools (Visual Studio + Windows PC) remain the same. Transitioning from .NET to iOS means that everything changes! There's a new language, Objective-C, the Cocoa Touch framework, new tools, Xcode, and the Mac OS itself. When learning new skills we tend to gravitate towards the most familiar concepts, these allow us to adapt and use our existing skill. The first time I fired up a Mac, fumbled around to find Xcode, and stared blankly at some Objective-C, I realised there are very few familiar footholds for a .NET developer to leverage when climbing the iOS learning mountain. MonoTouch helps make the transition from .NET to iOS development a little less daunting by allowing you to leverage your existing C# skills.

The Mono framework has had a long history, originally been released in 2004 as an open source implementation of the Microsoft .NET framework. The Mono framework covers many of the core .NET frameworks (ASP.NET, WPF, WinForms), but more recently it has extended its reach to mobile devices, providing an alternative to HTML5 for cross platform mobile application development. Released under the Xamarin banner you can download the tools required to develop C# application for iOS (MonoTouch) and Android (Mono for Android). I originally 'pigeonholed' MonoTouch as a technology for cross-platform applications, however, on meeting a number of MonoTouch developers I have found that the majority use this technology simply to leverage their C# and .NET skills for iOS development.

In this blog post I'll share my impressions of MonoTouch and the first application which I wrote. As a starting point I decided to create an iOS port of the simple Twitter-Search application I developed a few months back to demonstrate the use of the MVVM pattern for Windows Phone development. 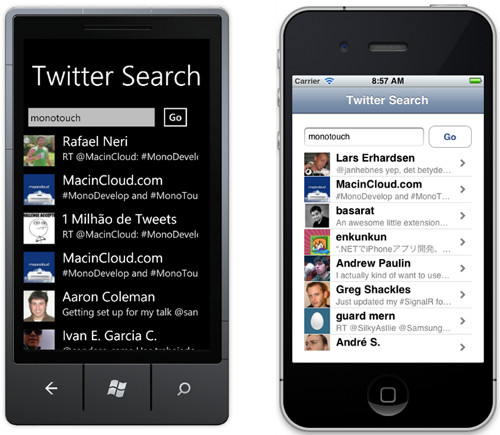 From MVVM to MVP

The Windows Phone twitter search application which I previously wrote uses the Model-View-ViewModel (MVVM) pattern, which is pretty much the de-facto pattern for Windows Phone, Silverlight and WPF development. The first step I took in migrating this application to iOS was to copy the view models into the project that I created via the MonoTouch project template. I was happy to see that these classes, which make use of Linq, Linq-to-XML and various other base-classes compiled immediately!

With an MVVM application the View Model state is kept in synch with the UI via the built-in binding framework. Unfortunately iOS doesn't have a binding framework, as a result iOS developers do not use the MVVM pattern.

With the MVVM pattern the direction of 'visibility' is as follows:

I tend to use the pattern where the view for a presenter is declared as an inner-interface of the presenter class (a convention I learnt from using Google Web Toolkit). Properties that would raise PropertyChanged events in a View Model now invoke methods on the View interface to indicate their state change. The View interface can also define events in order to indicate user interactions in place of commands. The complete presenter for my iOS application is given below:

Now that we have a presenter, we need a view!

Windows Phone applications are composed of PhoneApplicationPage instances, the iOS equivalent is a UIViewController. MonoDevelop does not have a built-in editor for view controllers, however, double-clicking the XIB files (which are roughly equivalent to XAML files), launches the Xcode Interface Builder. This tool allows you to create the UI via a simple drag and drop interface. The UI for my application is shown below: 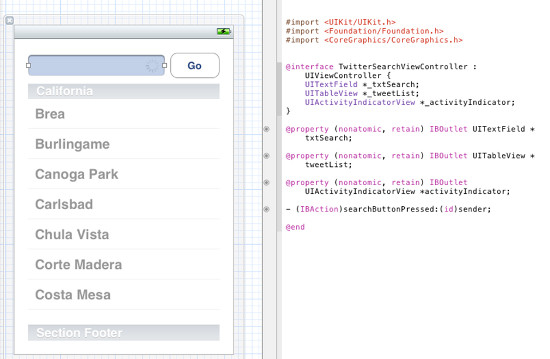 Interface Builder also allows you to wire up controls and their 'events' to your Objective-C code, using outlets and actions. The screenshot above shows how I have created outlets for the text-field, activity-indicator and table-view controls, together with an action which is invoked when the search button is pressed.

When you save the view-controller file, MonoDevelop steps in and performs its magic, generating a C# partial class with properties for each outlet and partial methods for actions:

The net result is that you can wire-up UI controls in much the same way you would using the VS designer.

Your view logic is placed in the associated partial class, in my example this implements the view interface declared by the presenter. It didn't take me too long to navigate round the API for the various UI controls, using the Xamarin MonoTouch reference as a guide:

When the user taps on the search box, the keyboard is shown. When they hit the enter key we would like to hide the keyboard. This is not the default behaviour for the text field control.

In the .NET world you would expect controls to raise events that you can handle in order to react to user input, for example the TextBox control raises a KeyUp event which could be used to detect an enter key press. The Objective-C approach to this is for UI controls to declare a delegate, which is defined by a protocol. You can supply a delegate to a control and it will be notified of user interactions. For example, the UITextField exposes a UITextFieldDelegate which receives notifications of user interaction.

Protocols are similar to C# interfaces, but with one subtle difference, they can have optional methods. As a result your delegate does not have to handle all of the 'events' that a UI control can raise. Unfortunately because C# interfaces cannot have optional methods, it is not possible to map directly from the Objective-C to the C# APIs. MonoTouch solves this by supplying base-classes for each delegate, which implements all the methods defined by a delegate's protocol. You can sub-class this base implementation so that you just need to add the methods you are interested in.

For example, in order to hide the keyboard on enter key press, we create a delegate implementation and assign it to the UI control as follows:

This feels like a slightly peculiar pattern for an .NET developer, but it is perfectly workable.

For rendering lists of items CocoaTouch provides the UITableView control. This is somewhat equivalent to the Silverlight ItemsControl in terms of where you might use it in your application, however, the API and capabilities are quite different.

The datasource implementation for the twitter application is shown below:

The UITableView has a standard cell type which has text, a sub-title, an image and an 'accessory' (the item rendered on the right-hand edge) - each of these components is optional.

Again, much of the API was discoverable via the MonoTouch documentation. However, when I wanted to find out how to render an image from a URL the first thing I did was google it, finding the following answer via StackOverflow:

It did take a little while to work out how to translate the above to my required C# equivalent:

So far my discussion of the iOS application has been based on a single view-controller. When the user clicks on a tweet, the application should navigate to a 'detail' page: 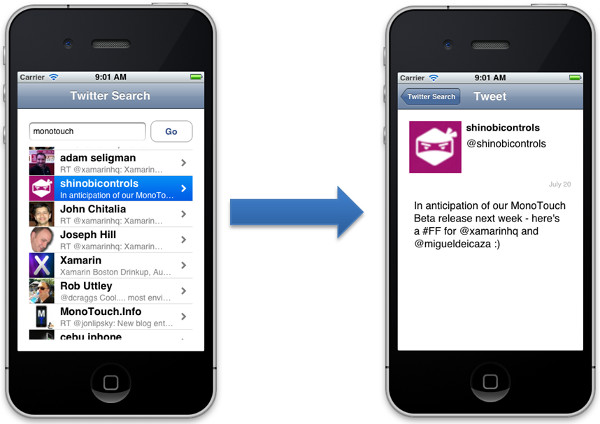 Using the UINavigationController is simple, you create an instance and set it as your 'root' view controller. You can then navigate from one view to the next by 'pushing' it:

In order to navigate from a tweet to the detail page, we simply handle the row selection within our table source / delegate:

Using MonoTouch I was able to implement this simple twitter search application in the space of just a few hours. I have a feeling that if I had tried to use Objective-C, which lacks a garbage collector and a familiar syntax, it would have taken me days rather than hours. For a .NET developer starting out in the world of iOS, MonoTouch certainly helps. However, by choosing MonoTouch over Objective-C you do make a few compromises, including an increased application size (to include the Mono framework) and the need to generate your own C# bindings for third-party libraries.

Using MonoTouch did allow me to 'look over the fence' at what life is like for iOS developers. One thing that immediately struck me was the performance of the UITableView. The WP7 Mango release improved scroll performance, but it is still pretty poor. In contrast the iOS UITableView is lightning fast, regardless of how much data you throw at it.

The iOS APIs also make it much easier to create applications that conform the UI design guidelines. By using the UINavigationController, your applications will have a correctly styled back-button (and will also use the fancy transitions between pages as you navigate between them). The UITableView also has a very useable set of default cell styles.

In conclusion, my feeling is that iOS development requires a bit more effort and the framework is not as 'rich' as the Windows Phone Silverlight framework. However, what it does have is speed and consistency. To my mind this is a pretty fair compromise.

I think you'll see quite a bit more iOS development from me in future!

You can download the code for both the Windows Phone and iOS applications: TwitterSearch.zip