In the previous post I discussed various options for running an interactive environment (a REPL) on .NET, and there was one glaring omission - C# (and perhaps VB if that’s your cup of tea). The collected source of the examples in this post/series is available here.

Sadly the C# environment shipped with Visual Studio 2012 does not come with an interactive environment. Here are some solutions, and hopefully a glimpse of the future.

Firstly there’s the poor man’s interactive window: the VS immediate window. I actually love this in debugging, it seems like you can almost execute arbitrary C#. Outside of debugging, there’s nothing to stop you firing up your code with a breakpoint just to execute some exploratory code in the immediate window. I often find myself doing this from a unit test when really I’d rather just have a REPL, but at least it’s there!

Unfortunately there are some limitations to the immediate window which if anything are becoming worse over time.

The official C# compiler is a black box, but of course there’s nothing to stop you running the C# compiler under the hood of any tool. It’s also possible to compile C# code via the CodeDom, which is a .NET interface to code generation, but is basically a wrapper around running the C# compiler executable. Tools like Snippet Compiler offer the chance to build C# code without creating a project in Visual Studio. Jon Skeet’s Snippy, created to execute code snippets from C# in Depth in a more script-like format. However none of these tools provide a REPL environment.

In many ways LinqPad is in the same category as the previous tools, of providing a place to write some C# (with syntax highlighting) which will be compiled and executed, and again it allows writing C# without a full class/method structure if desired for a lighter-weight experience. Again there is no REPL. However LinqPad does provide is a great tool for exploring, in particular offering rich data dumps. This excels for LINQ-like collection data, but there is no requirement to use LINQ, despite the name. It also supports F# or VB too, if you want to make use of the visualisation. 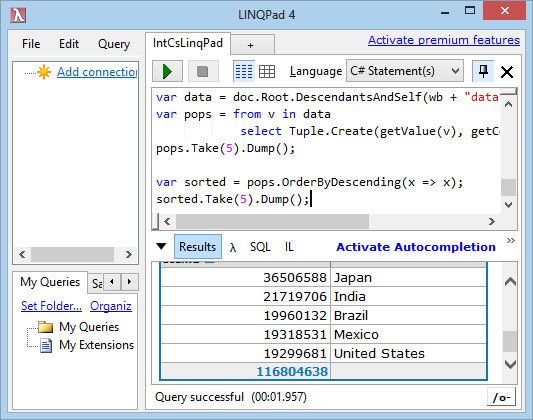 It’s worth mentioning a word on assembly references. Many of the examples above load references as part of the script itself, and import namespaces. LinqPad can add references and namespaces outside of your script via the properties dialog:

LinqPad follows a free/premium model, and statement completion is a premium feature, along with NuGet support.

Full example source is available to download for C# and F#.

Mono was ahead of the curve in bringing in a REPL for C#. Miguel blogged about the csharp REPL back in 2008, and you can read about it here. If you install the Mono package, a csharp executable is available. On windows this will be available in your path automatically if you start a “Mono command prompt”. There’s also a GUI version, gsharp, but I was unable to find a simple installation of this on Windows.

I actually expected that MonoDevelop/Xamarin Studio would have an interface over the csharp REPL - this is pretty standard after all, to integrate with a “send to interactive” function - but this doesn’t seem to exist as of now.

To get started with the previous example, we first import a namespace:

And add usings and continue as usual - unfortunately using statements must be separate from actual code, which seems to interfere with pasting the start of a C# file.

The csharp REPL does not support the definition of methods or classes, so in this respect it is rather limiting. Crucially it does support other C# features like lambdas and extension methods. So it is rather simple to pretend we can define methods inline:

One final thought is this is a REPL for the Mono compiler, if your intention is to interact with existing libraries this could be an issue.

Roslyn is “the future” of C#, and it can’t come soon enough (sadly it didn’t make it for 2013, but word is it will definitely be in the version after…). This is a complete reimplementation of the C# and VB compilers in managed code. Not only that, but a rich API is being exposed for the various parts of the compilation process, rather than the existing “black box” compiler, enabling things like editor refactoring support to use the actual compiler code itself. This also enables a rich interactive window: 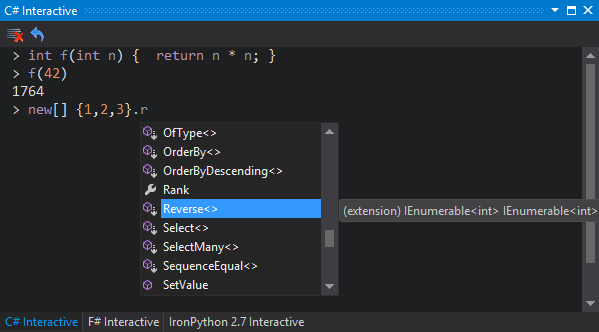 The C# code differs from a standard C# program in the reference syntax (similar to F# scripts), and the inclusion of definitions at the top level (a more “script like” syntax). Otherwise as you would expect from the earlier examples:

Contrasting with the Mono csharp REPL and the immediate window, here we can define classes freely, methods, any C# features we desire (well - not async yet).

The latest released version of Roslyn is the September 2012 CTP, usable with VS2012. This will not replace the C# compiler used to compile your actual projects, but will make itself available via the interactive window and other preview functionality.

A VB interactive window is slated for future release, but currently not included in the CTP.

You can download the full source for the examples above from this repository.

There are a number of different interactive environments available for the .NET platform, and which one you might choose to use will depend a lot on your available tools and background. If you’re a C# programmer with VS2012 installed I’d strongly recommend trying the Roslyn CTP. Unfortunately Roslyn won’t be with us in full any time soon, in the mean time the most solid REPL environment in my opinion is the F# one (it is an officially supported platform after all), or you can pick up IronPython if you’re a Python fan. LinqPad may well be a useful download in its own right, and is quite a decent platform for experimenting with C# snippets.

But roll on Roslyn!