A Fibonacci fan component for D3

In this article I’m going to create an interactive Fibonacci fan D3 component, and show you how to add it to a chart in just 7 lines of code.

For many of you, your first question is probably…

What is a Fibonacci fan? 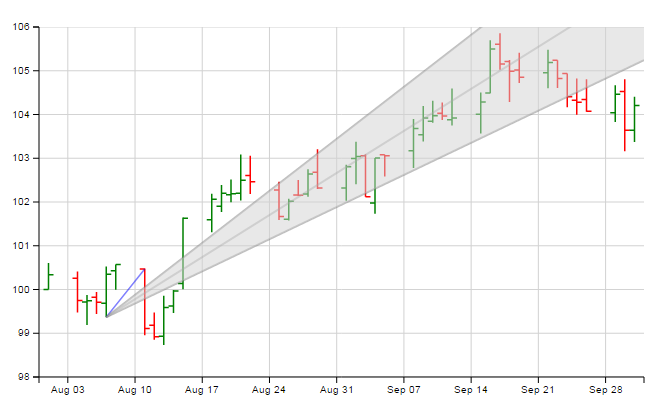 Investopedia explains how to draw a Fibonacci fan:

Fibonacci fans are created by first drawing a trendline through two points (usually the high and low in a given period), and then by dividing the vertical distance between the two points by the key Fibonacci ratios of 38.2%, 50% and 61.8%. The result of these divisions each represent a point within the vertical distance. The three 'fan' lines are then created by drawing a line from the leftmost point to each of the three representing a Fibonacci ratio.

If you want a more detailed explanation of the mathematics behind it, you can find one here.

Below you’ll see a chart, to which I’ve added my interactive Fibonacci fan component. To draw the fan:

Have a go and see it in action.

I tackled this project by creating a component with multiple phases, whose mouse move / click behaviour would change depending on which phase it was in.

Here’s the code for the component - I’ve left it in one block so it’s easier to copy & paste. Underneath, we’ll go through the code and explain what’s going on.

Let’s go through this, bit by bit.

At the top of the file we have our field declarations:

The component function is pretty trivial for this component - all we’re doing is initialising each of our SVG elements in turn, giving each a unique CSS class and making sure they’re all set to display: none initially.

We have two event handlers (which are set in the target() property accessor, see below) - mouseMove() and mouseClick().

The two functions that do all the work for this component are setFan() and clearFan().

We have three functions which help us to find the data value closest to the mouse pointer:

The component also provides a public function, update(), which recalculates the position of each of the SVG elements. I’ve included this because it’s required if the scales change (e.g. because of panning / zooming on the chart) - if you don’t call update(), the fan will stay in the same place while the chart moves around it.

Nothing unusual here, just get/set accessors for the fields noted above - with the exception of target, for which we need to set up our event handlers.

Here’s the CSS that I’ve used - nothing unusual here. Blue for the circles and trend line, grey for the fan lines (with the middle one slightly faded), and a light grey background for the fan.

Adding the fan to the chart

Now that we’ve created the component, the final step is to add the component to a chart. As usual, I’m starting with the OHLC chart that Tom developed in his article on OHLC and candlestick components.

As with my previous article, I’m adding an invisible overlay onto the chart, so that we get mousemove events fired when the mouse moves anywhere on the chart area.

We initialise the Fibonacci fan component, providing values for all the properties it needs, then we add the component to the plot area, as follows:

And with that, we’re done! We’ve created the interactive chart you see above.

Perhaps a useful enhancement for this component would be to add a crosshairs element so that the user has some extra feedback about the data points they’re about to click on. We’d probably want to set it up such that the crosshairs would only be visible when selecting points, and hidden when we’re displaying the fan elements.

We now have a D3 Fibonacci fan component which can be added to a chart with only 6 lines of code. It’s an interactive component, using mouse move / click events to move between the different phases of placing the first point, placing the second point, and viewing the fan. We also use transitions to make the appearance of the fan a little more visually appealing.

Andy Aiken · 29th  Sep 2014 · 12 min read
Creating an interactive chart with D3
Recently I've been looking at various D3 components, which has been a fun project. I haven't yet had the chance to develop an interactive, dynamic component though, which has meant that the resulting charts have been sadly static. For this article I wanted to use what I've learned to build a fully interactive chart - something that wouldn't look out of place on a financial app.