Java Microservices - How to get started in minutes using Dropwizard

This blog shows how to get started with microservices using Dropwizard. It guides the reader through building a simple task-list service.

The year 2015 was definitely a ‘Year of Microservices’ in Java. It seems that microservices and technologies such as Docker and Dropwizard permanently changed how Java development is done. Developers familiar with Java application servers are facing a dilemma- if they already know how to do something in Tomcat, JBoss, or other application server, why would they spend time learning a new technology? Why chose something different than what is already well understood? As you will see in this example, not only the time investment of learning Dropwizard is small (compared to alternatives) it is also a rapid and lightweight framework for getting a web service up and running. There are numerous other advantages when deciding for Dropwizard over other options (and some disadvantages), but now it is not the time for that. What follows is Dropwizard in Anger, and Java microservice in just over 200 lines (counting the .pom) of code!

The idea is to implement some non-trivial utility as a Java microservice. Checking what processes are running on a machine via a web service seems challenging and interesting enough. We want to be able to filter possible results (containing the word ‘Java’ for example) and limit the length of the process data exposed. This will help showcase some of the Dropwizard framework features. This example will show how a Java microservice can communicate with an arbitrary part of a system and expose it as an API. We know what we want to code, so it is time to get started. If you don’t like typing, feel free to clone/fork the github repository created for this project.

We are going to use Maven for building this project. This is pretty much the standard in the Java world and since we will be writing these services from scratch- I assume that most readers will be free to use it. There are two key things to put in your POM. One is the Dropwizard dependency and the other is the build plugin, that will let us run this application as a single jar file. Executing a jar is the way Java microservices are supposed to be run. The code for the project follows:

One thing that is familiar to anyone who had to work with Java application servers is the huge and hard to understand configurations file or files. Here Dropwizard helps again. It defines plenty of sensible defaults that we don’t have to worry about in this example and lets us decide exactly how the configuration will look like. For developers it may not be scary to go through large XML’s, but for most users- this can make a difference between something they can change themselves or asking for help. The language chosen for Dropwizard configuration file is YAML. It is a very simple human-readable data serialization format. As you will see, to use it in the configuration file, you don’t have to know much about it. We will call the configuration file tasklist-service.yml and let’s define the only variable that we want users to set- maxLength for the query. The whole file reads:

Now it is time to write the first Java code in this project. It is the TaskListServiceConfiguration class that is responsible for reading the maxLength property and storing it’s value:

It is easy to see how one can extend this configuration class to take more parameters. It is using Jackson so if you are familiar with it, you already have a head start.

Having a data model that can live both as JSON and Java object is very beneficial, as it lets the developers make full use of the strong typing found in Java. The only item we will use in this API is a Task and it’s definition will be very simple. It is also making use of Jackson:

Having dealt with the configuration (in less than 30 lines) and completing our simple data model, now is the time to write the application logic. For Dropwizard, the resources are where most of the logic lives. These provide the endpoints (Web Services) that will grant the access for the outside. Our task is to gather the processes that run on the system. Assuming that the environment in which the project will be run is Unix / Linux based (or git-bash in Windows) you can get the active processes from terminal with ps -e. If you are using Windows, feel free to customise the code. This method combined with the server configuration and customisable user query will provide the running tasks. The following code takes care of that while using SLF4J and Google Guava libraries provided with Dropwizard:

The application is nearly complete. The only things left are to register the TaskListResource in the main class, build and test. The main class will be called TaskListServiceApplication and doesn’t do much more than registering this resource:

Building and running the application

With the application written (or cloned from github) all that is left is to build it with mvn install. It is that simple, there is no extra step required. If you named everything the same as I did, this will create: target/tasklist-service-1.0-SNAPSHOT.jar which you can execute as a standard jar file.

To run the application type in the main directory:

And your first micro-service is running. 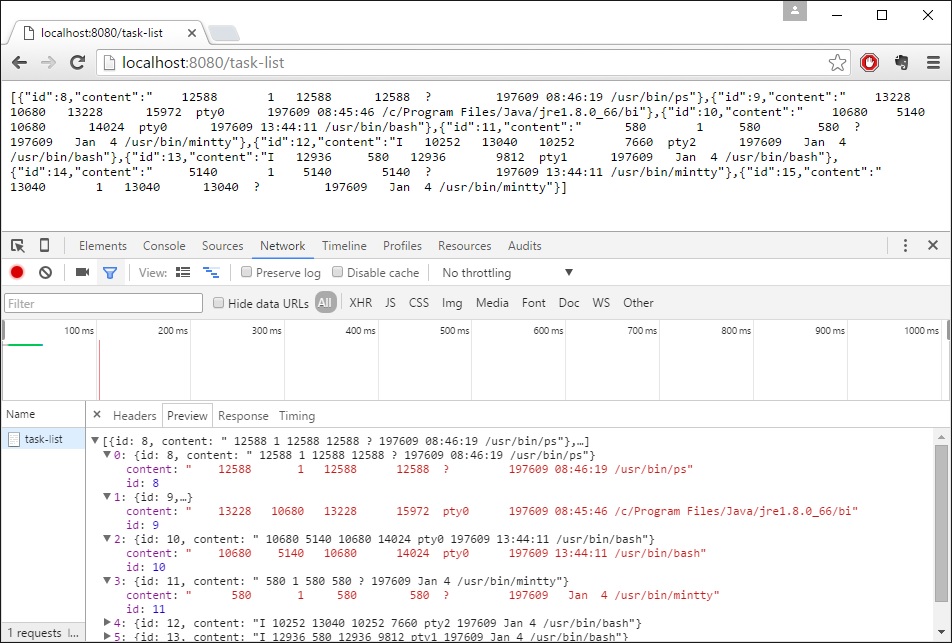 You can also filter only the process that contain ‘Java’ keyword: http://localhost:8080/task-list?contains=java 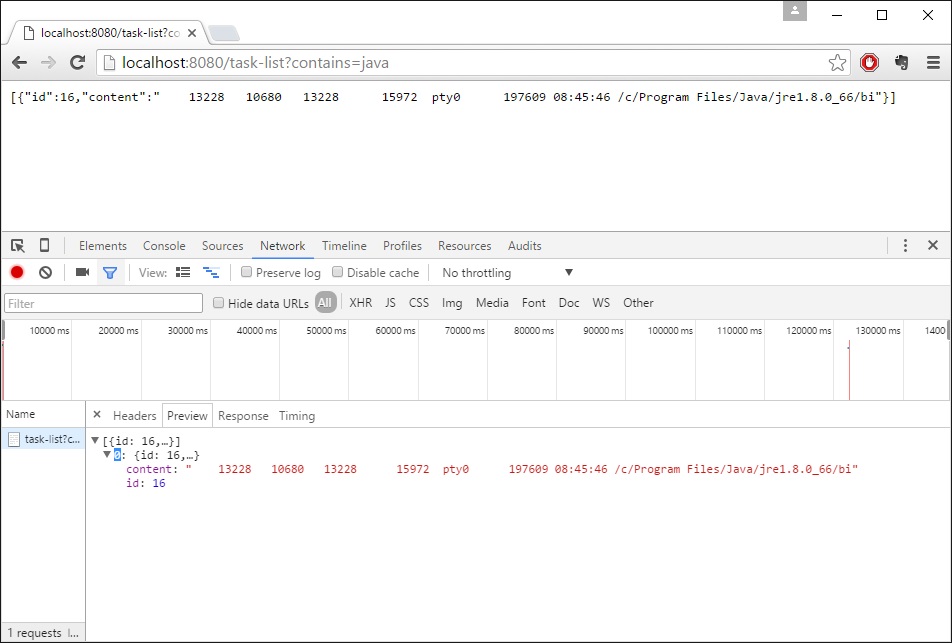 Or even see some server diagnostics on: http://localhost:8081/

Congratulations on building your Dropwizard microservice! With this knowledge it should be easy to dive deeper, by reading the official documentation, hacking on your own or checking some of the popular books on the subject. I strongly believe that microservices are here to stay and hope that this introduction proved fun and useful.

Spring Boot and MongoDB - a perfect match!
The popularity of Spring Boot in the Java world is undeniable. In this post I will show you yet another reason for this. Using Spring Boot makes working with MongoDB an absolute pleasure.

Bartosz Jedrzejewski · 22nd  Nov 2016 · 4 min read
Code reuse in microservices architecture - with Spring Boot
In most microservice architectures, there are many opportunities and temptations for sharing code. In this post I will give advice based on my experience on when it should be avoided and when code reuse is acceptable. The points will be illustrated with the help of an example Spring Boot project.