This post looks at integrating Angular 2 with Immutable.js and Redux, a popular Flux store implementation. It also demonstrates that the functional approach, encouraged by these technologies, allow for powerful concepts such as time travel, where you can replay actions and application state. 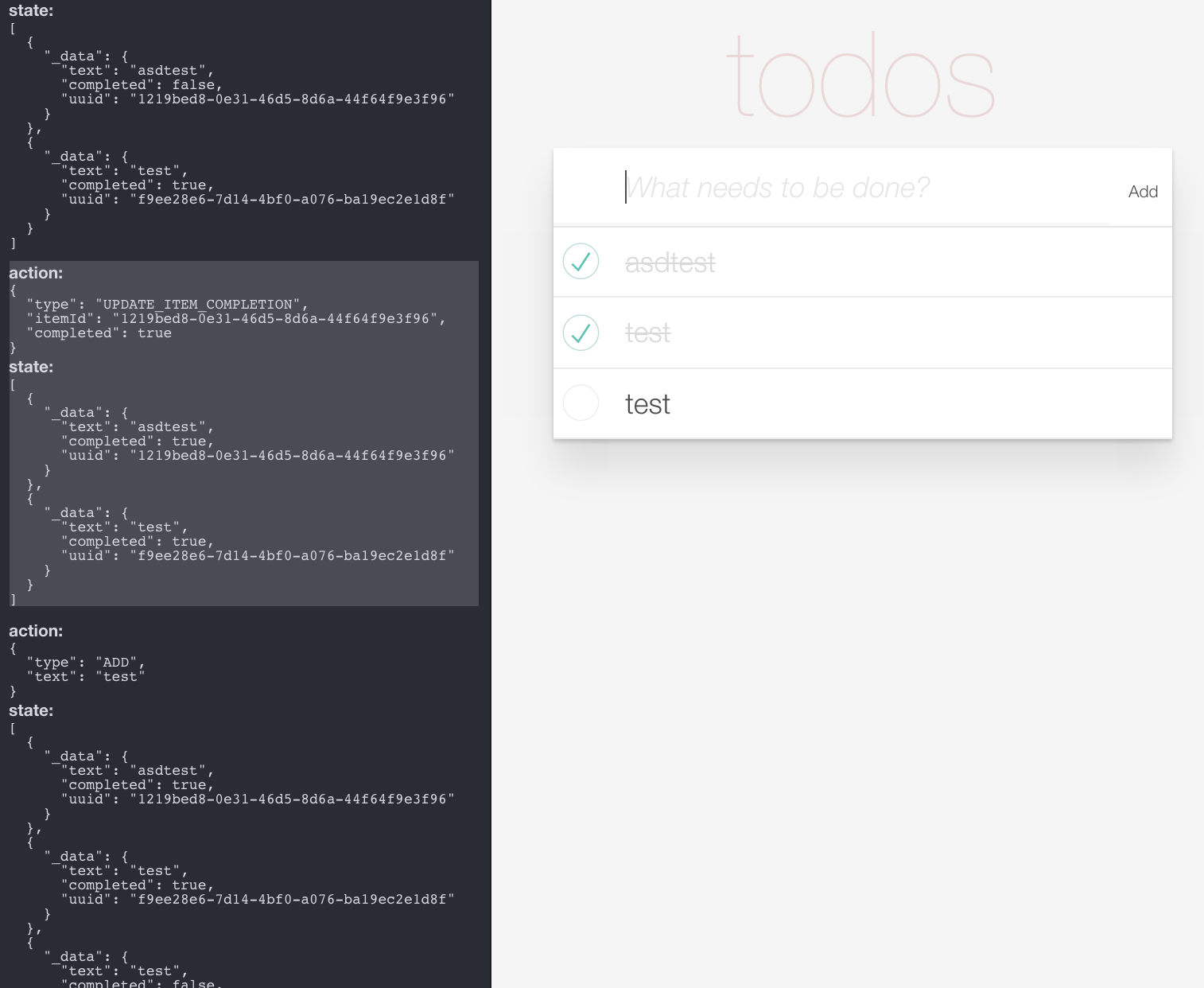 As a brief recap, I’ve been describing the development of a todo list application with Angular 2 over a number of blog posts:

This is probably my final post on my Angular 2 todo app and in this post I’ll explore Flux and more specifically Redux.

This post will mostly focus on the ‘store’ component of the todo list application. It’s responsibilities are simple, store the current application state, via local storage, and update the state based on an exposed API. The UI components use this API in order to mutate the current state as a result of user interactions.

In the current application the store is injected into the various UI components. Here it is in its entirety:

The store contains a list of items, and provides methods that mutate the state. However, the state itself is immutable, so these methods actually result in a transformation of state. The reason for using immutability is that it allows Angular 2 to optimise the rendering of UI components.

However, it’s a funny mix of patterns. An API that implies mutation as a thin facade over a more functional approach to managing state changes. Also, because mutations are littered throughout this class, the persistChanges method is invoked from multiple places.

I’m not going to go into Flux in much detail, it’s a relatively simple pattern which is explain in detail elsewhere. In brief, the Flux architecture has stores which represent the current app state, actions which mutate the state and a dispatcher which dispatches action for consumption by stores. The key principle of the Flux architecture is that it enforces a unidirectional dataflow. User interactions are represented as actions which are dispatched to stores, with state changes flowing from the top down.

Redux is a simplified (and more opinionated) version of Flux which has a single store that you dispatch actions to directly. I’m using it here because this is a simple app, so a simple Flux implementation makes sense.

Adding Redux to the project involves the usual SystemJS configuration, and updated type definitions, see the earlier post for details. Once added you can see that the Redux API is incredibly simple. This is clear form the type definition file which is only 50 lines long!

In it’s most basic usage you create a store based on a reducer, access the current state via getState and dispatch actions via the dispatch method. As a result, the previously bloated store becomes a simple wrapper around the Redux store:

The main purpose of the TodoStore class is to allow the Redux store to be injected using Angular 2. The above code ignores the fact that the todo items are persisted in local storage. I’ll add that back later.

An action is a very simple object that describes something that results in a change of state. Previously the todo list component invoked API methods on the store:

(This is a little more verbose, but I’ll come back to that later.)

With the actions and store being so simple, its clear that the final component, the reducer, is where all the magic happens.

A reducer is a function that takes a state and an action, and returns the new state. It is a side-effect free transformation, (state, action) -> state. The name ‘reducer’ is similar to Array.reduce, because it performs a very similar function. The current state of an application can be determined by reducing all the actions performed to some initial state.

Here is a reducer that supports a couple of actions, ADD and a REMOVE:

the API provided by immutable.js is a great fit for redux, allowing each action to be applied in a single line of code.

And that’s just about all you need to do in order to make use of Redux stores!

Constructing an action at the point of dispatch is a little long-winded. A common pattern is to define a number of ‘action creators’, functions that simply create actions (obviously!). Here are all the action creators for the todo list app:

Notice the use of ES6 shorthand property names.

For completeness here’s the final reducer implementation, which supports all of the above actions:

Within the todo list component, which handles events emitted by the todo item instances, it simply needs to create the correct action and dispatch:

The above code is really quite elegant. If the use of string literals for action types (UPDATE_ITEM_TEXT etc …) offends you, then by all means replace them with constants!

The above code provides all the functionality needed to add / remove / update items, however, these changes are not persisted. In the earlier implementation persistChanges was invoked whenever the app state changed. With Redux this is a whole lot simpler, the only place where the state can possibly change is within the reducer. This makes the management of state really easy.

Loading initial state simply involves obtaining the data from local storage, parsing, then supplying the initial state to the redux createStore function. The store’s subscribe method can be used to receive state change notifications, allowing all the persistence logic to be located in one place, in this case the constructor:

The underlying concept of Redux, where the application state can be determined by reducing all the actions performed to some initial state, is not only elegant, it is also very powerful. If you want to track state changes in your application, you simply need to log all of the actions that are dispatched. However, by recording these actions you can potentially replay them or perform rollbacks.

In this section I’ll show a quick-and-dirty time travel implementation that allows you to log state changes and roll-back to a previous state.

The following is a class that provides a Redux middleware component that stores each action and the resulting new state:

(Yes, the Redux functional concepts really are an uncomfortable fit with ES6 classes!)

You can see a new action type, ROLLBACK, we’ll get to that shortly.

Redux middleware is introduced at the point where a store is constructed:

With the above code in place, the StateMonitor class can be injected into an Angular 2 component which displays each action and the state after the action has been applied (or reduced):

The component that renders the action / state log on the left-pane detects click events, dispatching a ROLLBACK action to the store when this occurs.

The state monitor class can adapter the existing reducer to handle this action (the default reducer implementation simply ignores any unknown actions):

The above adapter is applied at the point where the store is created:

With this simple update the app now supports time travel, you can click on any action to roll-back to the previous state.

It would be pretty easy to extend the application to store the state-log in localStorage to allow you to replay actions, which would be a great aid to development and testing.

The sourcecode for this app is available on GitHub, although the time-travel code is on a different branch for clarity.