Highlights from the Inspire Europe Conference 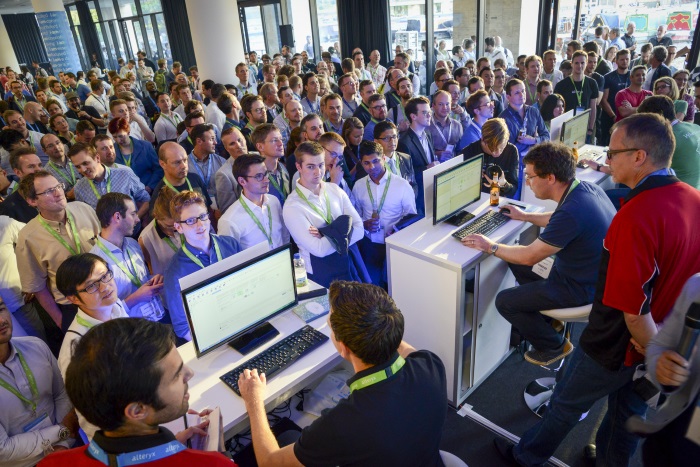 Last week, I attended the Alteryx Inspire Europe conference at Kings Place, London. This was the first time they had hosted the event outside of the US, and it was a great success with fantastic speakers and events, as well as selling out to over 400 people.

The night before the conference kicked off, about 100 users gathered for the London User Group. There was a Q&A session with Alteryx’s CCO Libby Duane and CTO Ned Harding, as well as a talk by Carto on their geographical visualisation platform and it’s integration with Alteryx. As always there were lively discussions. I spent a great time (unfortunately missing a lot of the Q&A session) chatting over my experiences with the SDK with Ben Gomez, Senior Product Manager at Alteryx. It was great to meet Ben in person and talk over some of the work I have been doing with SDK. The support I have been provided with over past 18 months has been fantastic (including some amazing one on one support from Ned).

Since I started using Alteryx early in 2015, I have found the community to be incredibly friendly and engaging. Over this time, I have got to know a lot of people, many of whom I had not met in person prior to the user group and conference. The user group was a great chance to meet many people and catch up with some others. It was great to see so many employees from Alteryx travel over from the US to be at the conference. A personal shout out to Mark Frish, one of the Alteryx ACEs, and a personal friend who specially made the trip from Chicago to attend the conference.

The conference kicked off with a keynote by Dean Stoecker, the CEO talking about some of the customer use cases and then about Daniel Boorstin’s Knowledge Trilogy. He also discussed the Alteryx for Good program and work it has been doing. 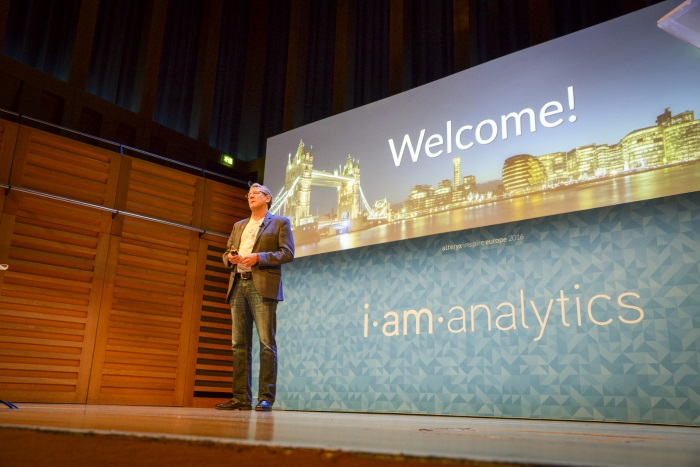 Following this keynote, there were two separate tracks: The Data Analyst track and The Technology track. The Data Analyst track was given by customer’s describing their use cases and stories of how Alteryx has made a difference in their organisation. The Technology track concentrated on best practices and techniques for using Alteryx as well a session talking about the product road map and the plans for the platform. 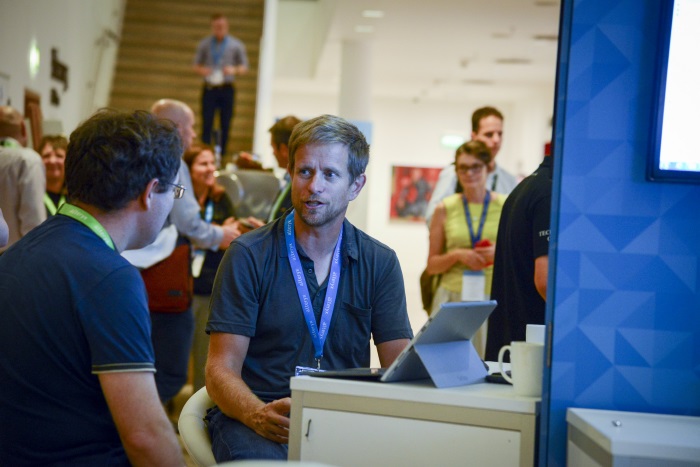 Throughout the conference, employees, ACEs and partners manned the Solution centre. This is an open space where anyone can bring their questions and difficult workflows and get help in solving any issues or problems they might have. While I didn’t have any specific workflows to discuss, I spent a great hour or so deep in conversation with Ned discussing the platform, engine, SDK and the pros and cons of C++ vs C# programming. Plus, on day two while in the solution centre, Dean demonstrated Alteryx Charades to us!

The second day kicked off with the COO George Mathew’s keynote. He showed off the integration with Carto, PowerBI and Tableau, as well as some of the new functionality coming in version 11. After this there were a couple more sessions in the separate tracks before CCO Libby Duane’s keynote. Libby concentrated on the community of users and announced the results of the Analytic Excellence Awards, the new members of the ACE program and presented the Grand Prix cup. Immediately following Libby’s keynote, the guest keynote was given by Tim Harford, author of the Undercover Economists. He spoke brilliantly about modern presentation of data and the dangers of disingenuous use of statistics and numbers. 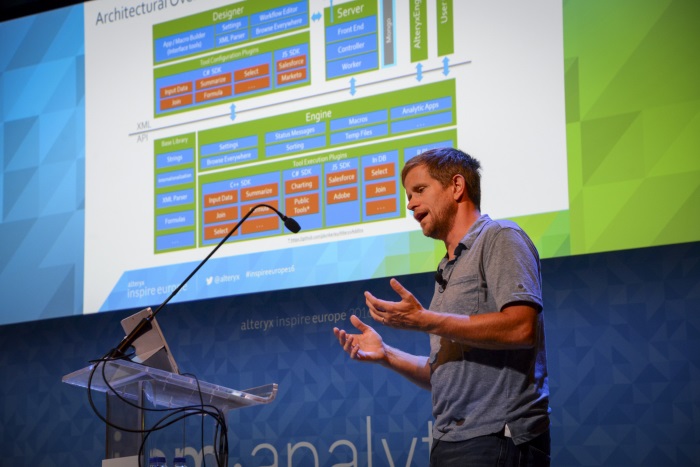 The final keynote (or technology track session) was given by Ned Harding. Called ‘A Brief History of Alteryx’, he went over first the original inception of the product (frustration at processing census data) before going into detail over the architecture of the platform. He went all the way down to the merge sort algorithm used within the engine! This was a great overview of how it all works and well worth the time for anyone who wants to truly understand the platform and how to get the most from it.

The Grand Prix is a tradition of the Inspire conferences. It is a data analytics speed race. For the inaugural European race, about 18 people entered the qualification round back in July. The qualification took place via WebEx with the competitors being given 7 workflows to work through. These range from cleansing and parsing data through to spatial analytics and predictive time-series work. For the first time, two of the competitors completed all seven of the problems. The three finalists selected were Charlie Archer from Javelin Group, Remco Diepenbroek from Infotopics and me.

The final took place at the end of the first day of the conference. Three identical workstations were set up in the ‘Battle Bridge’ conference room, with their screens also being shown on TVs on the wall behind. The race consisted of three ten minute rounds (laps), all based on analysing some road traffic accident data from the Leeds area. Each lap involved answering some questions worth one point each, with a bonus point awarded for finishing first. The first round concentrated on basic data preparation, the second round on spatial analytics and the final round was based on a logistical regression.

They make a big deal of all the contestants - giving it the feel of a sporting event rather than a data analytics competition. All the competitors are paired with a ‘Pit Crew’, who reviewed the answers as you went along and score the laps. It was great fun competition and a very close race, I was amazed to emerge the winner. I hope Charlie and Remco will compete again next year and will be cheering for them if they do! 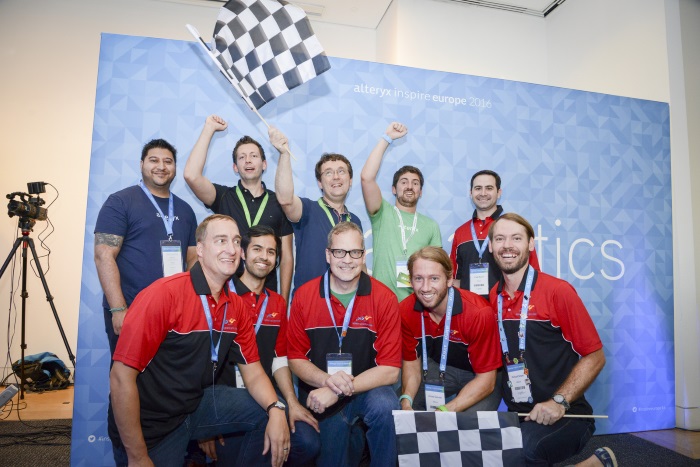 A thanks to Gene Rinas for being my Pit Crew and to Paul Banoub for leading the #TeamDunks support!

The ACE program is Alteryx’s way of recognising user advocates within the community. The program has some truly incredible members, many of whom I have got to know since starting to use Alteryx. It was an honour to be announced with Daniel Brun as the newest members of the fantastic group during Libby’s keynote. 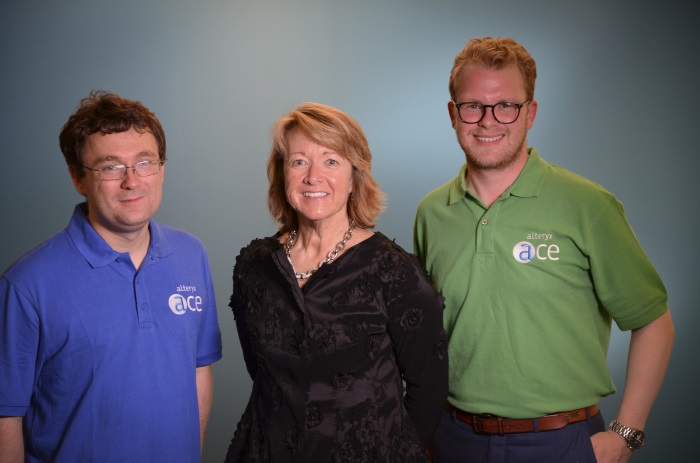 Thanks to all the hard work by everyone organising and taking part in the conference. I look forward to Inspire Europe 2017 at the Tobacco Dock in London, even if it will mean handing over the Grand Prix cup to the next winner!

Photos in this post are courtesy of Alteryx. You can see more photos from Inspire Europe here.

I am a Technical Architect at Scott Logic, based in London. I have many years of using C# within financial services. My current interests are in data analytics and visualisation, particularly using Tableau and Alteryx. I also enjoying learning about new big data technologies and machine learning.