This post explores some of the ideas and technology features behind Docker and Kubernetes. We delve into deploying a simple Java application on the Google Cloud Platform using a managed Kubernetes Cluster.

To start things off at a very high level we can describe the roles of Docker and Kubernetes in the following way:

If we want to understand a bit more about how Docker and Kubernetes fulfill these roles it is useful to define some of the related terminology:

A Docker image is a read-only template (Dockerfile) which provides the foundation to build a container.

A Dockerfile contains a series of instructions that Docker composes into a series of stacked layers (intermediate images). Docker uses the union file system to combine these layers into a single entity.

A container is a self contained Linux execution environment.

Docker relies on a Linux kernel feature called control groups (cgroups). Control groups allow Docker to enforce limits and constraints by isolating CPU, memory and I/O to a group of one or more processes. Docker utilises kernel namespaces allowing multiple containers to share the same kernel at the same time as maintaining an isolated workspace. Together these Docker features allow containers to operate effectively as single process sandboxes.

When a container is stopped it will retain all its settings and filesystem changes (stored in the top layer that is writable), all processes running in the container will be stopped and you will lose everything in memory. This is what differentiates a stopped container from a Docker image.

Volumes live outside the union file system and exist as normal directories and files on the host filesystem.

Volumes have the following uses:

A node is the smallest unit of computing hardware in Kubernetes.

A node is a representation of a single machine in your cluster. We can simply view each machine as a set of CPU and RAM resources that can be utilised. In this way, any machine can substitute any other machine in a Kubernetes cluster. The cluster is designed such that a worker node runs the tasks as instructed by the master node.

In Kubernetes, a group of nodes pool together their resources to form a more powerful machine.

The cluster distributes work to the nodes, redistributing the work load as nodes are added or removed.

Nodes can be physical servers or virtual machines that have the Kubernetes platform installed. The cluster contains a master node and a number of workers. A running application is agnostic to which nodes it is running on. Local data is not persistent, so persistence needs to be handled by network attached persistent volumes.

A pod is a collection of one or more containers that form a local network and share the same resources.

Pod is the Kubernetes unit or scheduling (replication). Kubernetes can deploy new replicas of a pod as necessary on the cluster to provide load balancing and failover. Pods should be small as possible holding main process and tightly coupled helper containers (side-cars).

Containers in a pod run on the same host, share the same network namespace and are visible to each other via localhost. The pod is the logical set of containers that form the application.

The Deployment is a control structure that takes care of spinning up or down of pods.

A number of pod replica sets form a deployment. Kubernetes will aim to maintain and monitor this deployment. When a pod is modified a new replica set will be scaled up while the old replica set is scaled down providing no down-time of the deployed application. Deployments can in this way be updated, rolled out, or rolled back.

A service provides a way to group pods into a kind of single business process and a common access policy.

In Kubernetes a service provides a network connection to one or more pods. Each service has its own IP address and port which remains constant for the lifetime of the service. The service abstraction provides decoupling from the ephemeral nature of the pod lifecycle. Services are persistent and permanent. This allows them to provide discovery and offer load balancing.

To see where this sits in the Google Cloud Platform (GCP) it is useful to look at the characteristics of the various options provided for code execution.

GCP offers a spectrum of options ranging from highly customisable to highly managed. 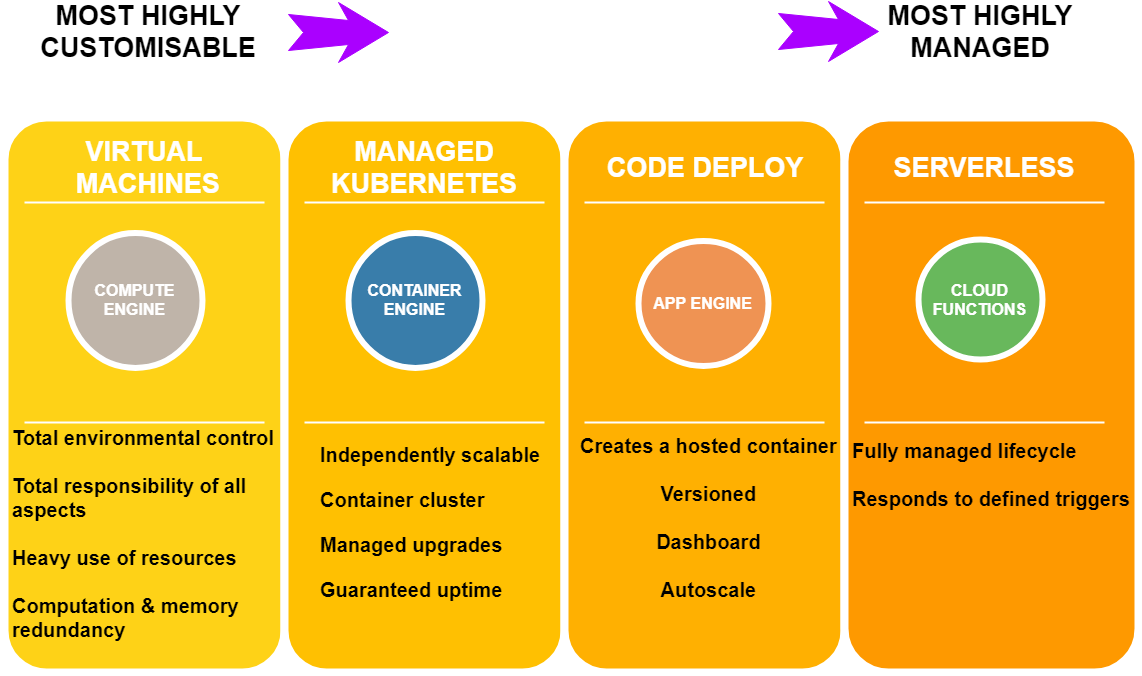 We are going to setup a development environment that has three components. It will allow you to develop code locally, then using a locally hosted container with gcloud client configured be able to interact with Google Container Registry and Google Kubernetes Engine.

This is where you do your coding and run tests on your locally checked out code. This will require a recent version of docker to be installed so that we can run a container that acts as a client to google cloud.

We are going to run the cloud-sdk inside a container on the host machine. It will use docker volumes to access the local code and cloud configuration.

We are going to set up a project on GCP, build docker images in the Google Container Registry and deploy to a new Kubernetes Cluster.

If you do not currently have a google cloud account

You get given $300 free credit to use over next 12 months. This enables you to use up to 8 cores concurrently on free usage.
You have to supply credit card to prove you are not a robot, but there is no automatic charge after the free trial ends. In fact you won’t be charged unless you manually upgrade to a paid account. sign up

Create a new project in the GCP web console. Wait for the API and related services to be enabled. This can take several minutes.

Next we need to enable billing

Google produce a Docker image that has gcloud client and all the dependencies installed.

Pull the latest image from Dockerhub

The next step is to authenticate and authorise the gcloud container. We are going to run gcloud init. This will authorise Cloud SDK tools to use your user account credentials to access Google Cloud Platform , or lets you select an account if you have previously authorised access. It sets up a Cloud SDK configuration and sets a base set of properties, including the active account from the step above, the current project, and if applicable, the default Google Compute Engine region and zone. further details

Here we are creating a named container. Inside the container as root we will then call gcloud init

Finally we exit the container.
In the following command --volumes-from will use the filesystem created with the gcloud init command. Using this we can create discardable container using –rm the will use the gcloud-config container we’ve generated.

In this manner we are able to handle multiple environments.

We are going to use a super simple Spring Boot web app as an example.

On the host machine create a directory where the code that we are working on for an application will live. Clone the git repository https://github.com/spring-guides/gs-spring-boot.git and go to the complete subdirectory

To package a deployable JAR file for the application run the following that will create a gs-spring-boot-0.1.0.jar in the target subdirectory.

Since this is going to run as a containerised application on Google Kubernetes Engine we will need to create a Dockerfile.

This creates a very simple Dockerfile that just copies the built jar file to a Java 8 derived image. It then expose port 8080 to the host and calls java -jar /app.jar on container startup

The command below runs bash in a new temporary container with

gcloud lets you build images on the cloud and push to GCR automatically.

That is to say that if you have a Dockerfile, you can directly push/build without docker:

When you run this, the source code is compressed into a tar file, uploaded to a GCS bucket and then Cloud Container Builder builds it and pushes the resulting image to GCR

It is important to provide a tag in the image name. Without the tag Kubernetes will use the latest tag when looking for the image in the repository.

You can list all the container images in your registry with:

We are going to create a 2 node cluster using the n1-standard-1 machine type. We can list the available machine specs:

Now that we have the image published to Google Container Registry we can create a deployment. To describe the deployment we define a configuration file like the one below

We can see that a deployment and pod has been created

We can inspect the deployment properties

At this point you should have your container running under the control of Kubernetes but you still have to make it accessible to the outside world.

By default, the pod is only accessible by its internal IP within the cluster. In order to make the hello-java container accessible from outside the kubernetes virtual network, we need to expose the pod as a kubernetes service.

You can expose the pod to the public internet with the kubectl expose command combined with the --type=LoadBalancer flag. This flag is required for the creation of an externally accessible IP :

Note that you expose the deployment, and not the pod directly. This will cause the resulting service to load balance traffic across all pods managed by the deployment (in this case only 1 pod, but we will add more replicas next).

Now in a web browser you can reach the balanced web app on http://{EXTERNAL-IP}:8080

When a new deployment has been created then a new ReplicaSet is also created automatically. A ReplicaSet ensures a specified number of Pod replicas are running at any given time.

The format of the command to scale an application is

It is also possible to set auto-scaling parameters based upon cpu utilisation:

Changes to the cluster resulting from scaling create cluster events. The events can be viewed along with events such as starting and stopping containers:

To view the logs we need first to get the pod name:

You can also get a shell console attached to the running container:

or with multiple containers

Finally we need to delete the service

Although just scratching the surface of what can be done with Google Kubernetes Engine we have:

Hopefully this has whetted your appetite to explore further.

OK Google, what do you see? - Labelling images in Google Cloud
In this hands-on tutorial, I'll introduce Google Cloud Platform and use it to develop a simple computer vision application. We'll make the most of its user-friendly interface, great developer tools and generous free tier. 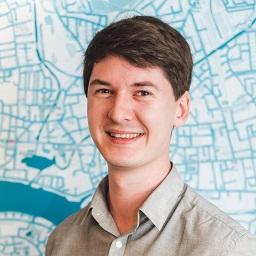 James Grant · 27th  Jan 2020 · 6 min read
Service discovery with Docker Swarm
For the last few months we've been working on a very DevOps focused project. As such we've used AWS, infrastructure as code, Docker and microservices. The different microservices were initially running all on one box, each with a different port. This solution wasn't scalable or very practical. We couldn't have all our services on one machine and it was getting tiresome and error prone having to remember/lookup which port each service was on. We needed our services to run on separate machines, and we needed a way to communicate with them without having to hard-code IP addresses or port numbers. What we needed was service discovery. As we had already been using Docker for each service, Docker Swarm was a natural candidate.

I'm a senior developer at Scott Logic, based in Newcastle. I've been involved with Java development for the last fifteen years and I'm keenly interested in modern JVM technologies.