When I was offered to participate in the “Ada Lovelace Colloquium”, I got very excited and immediately said yes. The impulsiveness stemmed from me having read a book about Augusta Ada King, Countess of Lovelace a couple of years ago and admiring her due to her critical and innovative thinking. Ada was home-educated by her mother, who encouraged Ada to dive into the depths of mathematics over spending time on subjects like English literature or arts. Ada’s father, on the other hand, was a poet – almost a complete opposite of what Ada’s mother wanted Ada to be. Maybe her roots, as well as communication with Charles Babbage regarding his Analytical Engine, resulted in Ada envisioning the mechanical calculating machines as futuristic computers being able to interpret more than logical operations, things such as music. Stunningly, she had foreseen this a century before computers even existed!

BCSWomen Lovelace Colloquium is a conference for women studying Computing and related subjects, who are passionate about technology and want to share their work with others. It was founded by Hannah Dee and initially was held in the University of Leeds in 2008. It has been held annually ever since in different universities each year throughout the United Kingdom. The 12th BCSWomen Lovelace Colloquium took place at the University of Salford, 17th April 2019. I attended this event along with our technical recruiter Matthew Nicholson and test engineer Heather Carter, who both had previously been participating in this conference. Scott Logic has been a sponsor of the event for several years now. This year we sponsored the event’s Social. Other sponsors included companies such as Google, Amazon, J.P.Morgan, BCS Manchester and Bloomberg. 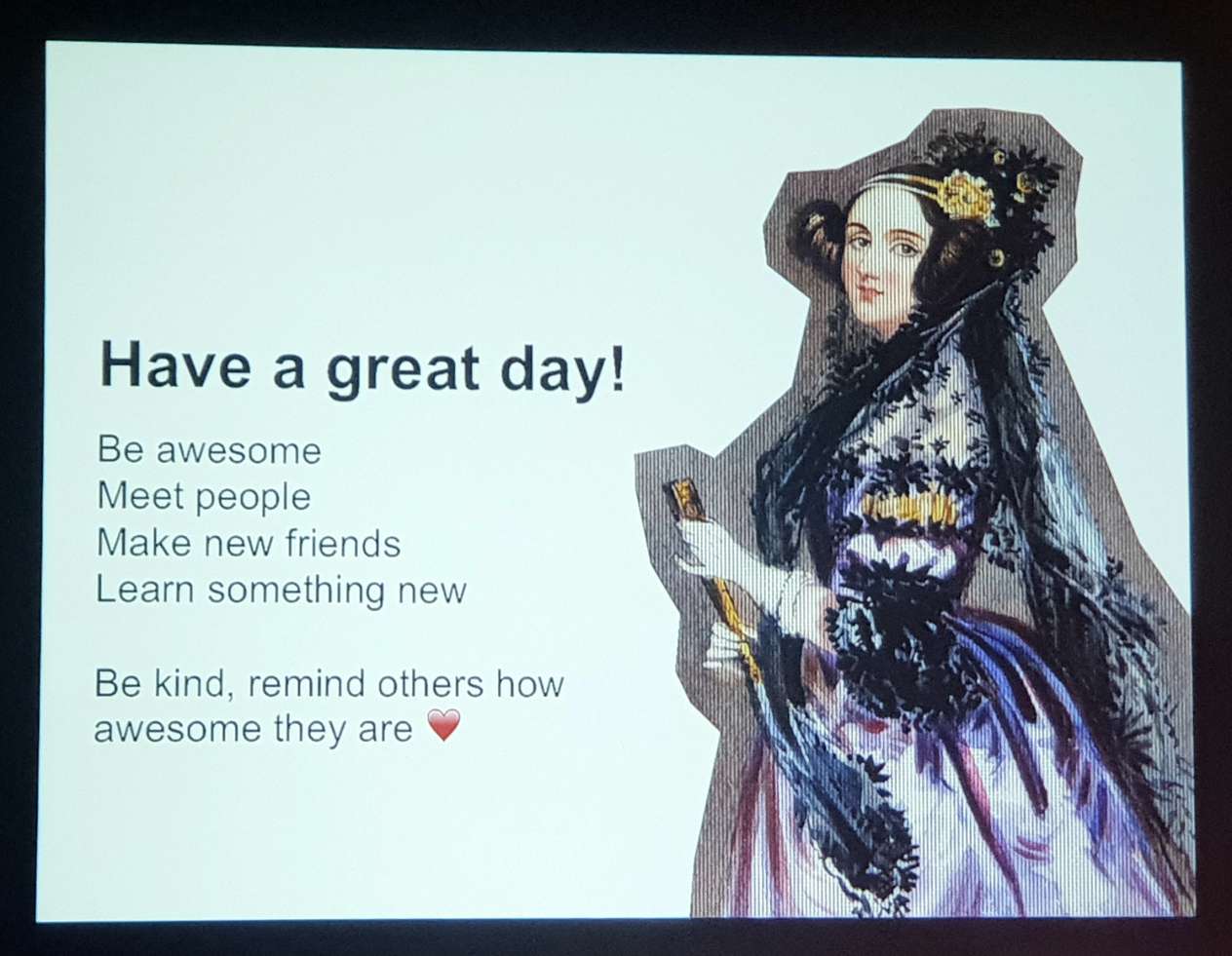 Throughout the day several talks took place that anyone could attend. The speakers were women working in the IT industry, passionate about their jobs, wanting to share what they do, how they got where they are now and to inspire students to pursue their goals by sharing their experiences and excitement for what they do. The keynote speaker was Helen Leigh, a creative technologist, DIY enthusiast, especially passionate about music. She talked about her somewhat untraditional career, the projects she’s worked on. Most of them came into existence due to her passion for DIY and music and not by a client request. She would spend time developing something she finds interesting, then share it with the world and get various companies interested in investing in it. Her latest project was an untraditionally looking ‘electric guitar’ using the ‘capacitive touch’ technology. She’s also an author of ‘Crafty Kid’s Guide to DIY Electronics’. In her talk, she also shared some tips on how to make your hobby your job, how to target production of a product to a particular audience so that it would be successful. Another talk I attended was given by Natalia Miller, a software engineer at the BBC. She has joined BBC after graduation and has been working in Sport and Live services. She talked about her experience as a graduate and challenges in developing reliable, resilient and high-traffic services, about relying on sports data providers and dealing with changes the providers implement. Natalia shared what she learned in those years at BBC, described the stack her team used on a project she has worked on, discussed what it means to be software engineer, what software engineers do and shared her experience while line managing and mentoring new BBC graduates.

In-between the talks I spoke with students, who came to the event. We as a sponsor company had a stall with information leaflets for career opportunities that Scott Logic offers, pens and Java logo sets (a very cool project - check it out here). I’m glad to say our stall was very busy. Many students were keen to learn more about Scott Logic, what career paths we offer and what we look for in applicants. Some confessed they were unsure whether a purely development role worked for them, and were interested to hear about other roles within software development. Students, especially the ones who were in the early years of their education and unsure what they want to do after graduation, asked about my role and what does my day as a software developer looks like. I remember asking this question myself in some of the grad fairs that I attended as a student. It was nice being able to shed some light on these questions, share my experience and hopefully help them to envision themselves into different roles.

A core aspect of the BCSWomen Lovelace Colloquium is the student poster presentation. I found it very interesting and refreshing seeing so many bright women thinking about complicated issues. Posters covered problems, such as “Combatting Cybersickness in VR Dementia Care”, discovering new indicators for suicide by using machine learning, discussed if algorithm can decide who deserves an organ transplant, possible disinformation disaster based on DeepFake technology, the need for hate speech detection systems, the controversy of human microchip transplants, BigData Influence on e-commerce. And this is just a sample of many excellent posters.

I think this conference provides a perfect opportunity for students and professionals to network, share their passion for technology, discuss their work, graduate-role prospects and ideas. I could not help but notice that the vast majority of people in the events were women, which is to be expected given the context of the event. However, to bridge the current gender gap in the industry, it is crucial not only to encourage women to pursue computing-science related degrees but to also reduce the divide by encouraging all students (not exclusively female) to come to events like BCSWomen Lovelace Colloquium. I felt like the talks were inspiring, and all students could benefit from hearing what the speakers had to say. In summary, I’ve enjoyed the event very much as I had the chance to communicate with other people in the tech world and listen to interesting talks!

Software Developer at Scott Logic, based in Newcastle.