SwiftUI is a new declarative UI framework Apple have released for developing apps on their platforms. In this post, I will particularly look at how to construct view hierarchies.

SwiftUI view hierarchies are made of structs which conform to the protocol View, which looks like this:

View has an associated type which must conform to View, and a single property called body. Conformers must provide an implementation of body which must return a type that conforms to View, which becomes the Body type. SwiftUI views are structs which conform to the View protocol:

Note that Swift syntax allows you to omit the return keyword if the compiler can infer the returned object, in this case Text. The combined effect of the return type some View1 has two significant effects:

Therefore a SwiftUI View has a body property which returns another SwiftUI View. In this way views can be composed into complex hierarchies by nesting them in other views’ body properties. Custom views can easily defined by conforming to View, and can be used in the same way as pre-built components.

A SwiftUI body property has to return a single view to satisfy the protocol definition. It is possible however to compose multiple views using special grouping views. These views become the Body type for the SwiftUI view which returns them. They themselves have a Body type of Never, which is how they can contain multiple views. They are one of the primitive views which SwiftUI has some special handling for, which works out how to render the views they contain. In practice, you can treat them in the same way as a normal view, but containing multiple views instead of just one.

The most common grouping views are the stack views (HStack, VStack and ZStack), Group and ForEach. The stack views provide a way to spatially arrange views by stacking them horizontally, vertically and on top of each other respectively, with a defined spacing between them. Group simply provides a way to group up to 10 views together in code, and has no effect on rendering. ForEach is very similar to Group but takes in a Collection of data and outputs a view which you define for each member of the collection (syntactically it’s very similar to a forEach method, hence its name). The members of ForEach have to be uniquely identifiable by a property. In the example above, we provide the property self to uniquely identify the strings in the array by their own value. The resulting UI is: 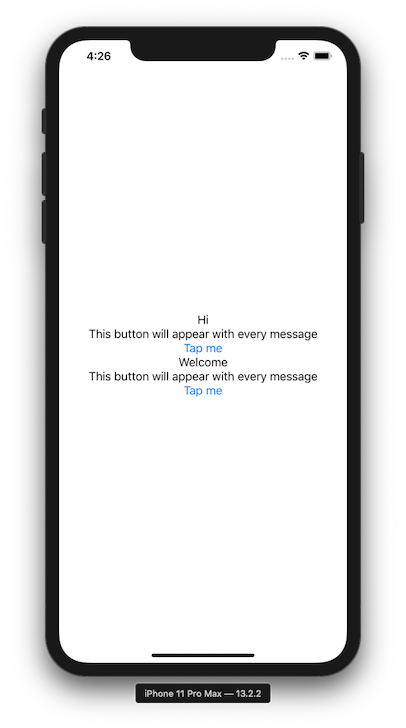 Being a declarative UI framework, SwiftUI renders views based on the state of the application, with a few different ways of declaring state.

Wrapping properties with the @ObservedObject wrapper allows SwiftUI views to hook into Swift’s Combine framework, which manages data changing over time or asynchronous. The @ObservedObject wrapper must be applied to a type which conforms to Combine’s ObservableObject protocol. An ObservableObject mus be class, which may have multiple mutable properties. When any of the properties change, the ObservableObject publishes a notification to inform any subscribers that the class has changed. Wrapping a view’s property in @ObservedObject informs SwiftUI that the property is a source of UI state, and to watch the publisher for changes. An example might be a network service, which publishes values from a network call.

The @Binding property wrapper is applied to properties on a view, and wraps them in the Binding struct. @State exposes a property which returns a Binding struct wrapping the value it controls. @ObservedObject exposes a property which has the same properties as the object, and returns their values wrapped in a Binding struct. Instances of Binding can be passed into a child view to initialize a property wrapped with @Binding. This gives the child a way to get and set the value without copying the state. This helps keep one source of truth for state, while allowing children to mutate thier parents’ state.

Understanding how to construct view hierarchies in SwiftUI, and how to manage state using property wrappers provides the basis for understanding what happens when state changes and the UI updates.

There are two stages SwiftUI goes through to render UI from your Swift code. The first is to initialise the View structs which you define in your code. These are essentially a blueprint of what you would like the UI to look like based on the state of the application, defined in the body properties of the views. SwiftUI builds the view hierarchy of a View by calling the body property to initialise its children. It will then call the body property of each of those children, which may then initialise their own children, which have their body property called, and so on. There are a number of primitive views that come with SwiftUI, such as Text, which have a Body type of Never. Never is a special return type in Swift which tells the compiler that the function will never return. In this case, Never means that SwiftUI doesn’t call body when these primitive views are initialised, but handles them in a special way. These primitives therefore become the base of any view hierarchy, as they don’t initialise any new views in their body function.

It’s important to note therefore that the initialising a SwiftUI View struct doesn’t automatically lead to updating the virtual view tree. SwiftUI will only access the body property on a View if the value of the View has changed. This means only the parts of the view hierarchy which have actually changed will be updated on the virtual tree, and then re-rendered. While re-rendering is expensive, it’s relatively cheap to initialise SwiftUI views because they are value types. Therefore this system allows SwiftUI to remain performant by calling body when a view’s state changes, and initialising all of its child views again, yet only re-rendering the children affected by the change in state by comparing the resultant primitive views.

SwiftUI re-renders are triggered by changes in state, which leads to the body property of a View to be recomputed. Once this body is recomputed, the rendering system described in the previous system ensures that any View structs affected by the state are re-rendered, as their value will have changed.

If a @State property is changed then the view which declared that property its body recomputed. Any newly initialised views which have a different value to their predecessor will also have their body recomputed and so on. This leads to all the views affected by the change in state being re-rendered.

If an @ObservedObject publishes a new value, any view with a property referencing object will have its body recomputed. An ObservableObject can have multiple properties, but only informs subscribers that it has changed, not which of its properties has changed. This means SwiftUI can’t predict whether a view will update based on whether it actually uses the property that has changed, so it’s possible body will be recalculated when it didn’t need to be. This is particularly true of @EnvironmentObject, as this is just a special type ObservableObject which is intended to be injected into multiple views. However, as stated in the previous section, initialising views in the body computation is relatively cheap, and if the state didn’t cause a change in the view then that won’t change the virtual tree and therefore won’t lead to a re-render.

SwiftUI separates the computation of its view hierarchy from the rendering of basic components. Only basic components are actually rendered, so changes are easily distinguished and re-rendered. The view hierarchy is recalculatedin response to changes in application state. This is tracked using wrapped properties, and only View bodies which declare the property which changes are recalculated. During calculation, top level View structs are reduced down to basic components. This system leads to an efficient declarative rendering framework with easily traceable state changes.

Exploring SwiftUI Part 2: State management inspired by React
In this post I look at how SwiftUI manages state with Combine, and how it compares to using React with Redux. SwiftUI is Apple's new declarative UI framework for developing UI natively, while React is a declarative UI framework for the web.
Benedict Quinn · 6th  Jan 2020 · 12 min read
4 things I learned to love about Swift
When first learning to develop in Swift, there were many cases in which I would become frustrated at some of its unique features. However, the more I learned about Swift, the more I realised these features weren't so crazy after all.