Last year, the React team introduced Hooks - allowing many React features which were previously only accessible by class components to be available to functional components. While there was a high amount of praise and excitement for the release, there were also some complaints. One of the most common arguments was that they were too “magic”.

Magic code is a common issue in every framework. To improve the developer experience, the implementation details of the framework are abstracted away. This abstraction, however, comes at a cost, such as making your code very difficult to debug as soon as anything goes wrong.

To help demystify React Hooks, Ryan Florence created a demo in which he built “crappy hooks”. As the name suggests, instead of importing Hooks from React, Ryan implemented a basic version himself. Although simplified, this created a mental model for me and helped pull back the curtain of React Hooks.

During the past year, I’ve had the opportunity to work with several of the graduate developers here at Scott Logic. One of the most common complaints I hear when they’re learning React Redux (the library that connects Redux to your React application) is that it’s too magic. They don’t understand how Redux is able to update their components, or how their components can update the Redux store by dispatching actions into the abyss. And because they don’t understand how it’s working, they struggle to debug their code when something breaks.

So, in this post, I’ll be implementing “crappy React Redux”. This is intended to give a general idea of what’s going on when you connect your React app to Redux, rather than give a detailed description of how React Redux is implemented in practice.

But before we jump into the code, first we need to clear up another source of confusion when first learning React Redux - what is the difference between React and Redux?

React vs Redux vs React Redux

React is “a JavaScript library for building user interfaces”. Its job is to take data and render the correct display on the screen. When the data changes, React will figure out which parts of the screen need to update, and rerender them.

Redux is a state management tool. It is concerned with the state (or data) of your app: storing it, updating it, and notifying the appropriate listeners of updates. It does this by dispatching actions, which describe what happened, and reducers, which specify how the state should change in response to the action.

React Redux can be used to refer to the general tech stack of using React with Redux. However, I will be using the term “React Redux” to refer specifically to the React Redux library. This library is used to bind React and Redux together, allowing React to access data in the Redux store and dispatch actions, and updating the appropriate components when the store updates.

React Redux can be thought of as the “magic layer” that lies between React and Redux and it’s this layer that we will be implementing.

This would not be a React demo without creating a todo list. The initial app is a React implementation of a Svelte example. It’s a simple app with an input at the top to add new todos, a list that shows incomplete todos and one that shows completed todos. The code can be found on CodeSandbox, where you can also follow along! 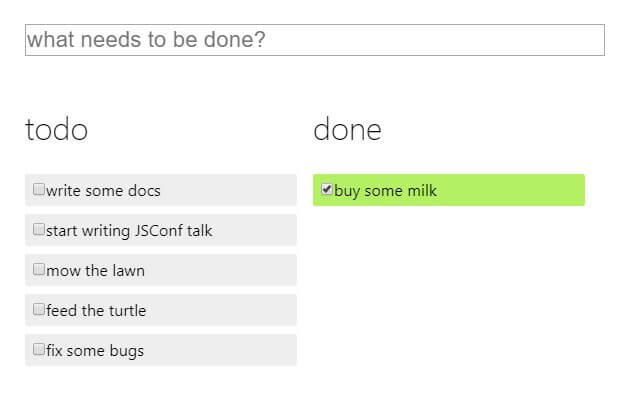 One day, our tech lead comes to us, explains the app state is far too complicated to manage with pure React and asks us to use Redux. After a quick npm install redux, we write a reducer and some actions. Finally, we create the Redux store in the root file:

But how can we make the store globally accessible to all parts of our app without having to pass down the store as props to every component?

According to the React documentation:

Context provides a way to pass data through the component tree without having to pass props down manually at every level.

I often picture the Provider as a satellite which will float above your application and hold the Redux store. Consumers will be able to send messages to the Provider in the form of dispatched actions, and the Provider can speak to the Consumers by sending them the new state.

Let’s create a Provider, which will hold the Redux store, and wrap the root component with it so that it can be accessed by every Consumer in our app.

There’s just one problem. The App component isn’t a Consumer and ideally, we’d like to leave it that way. It shouldn’t be concerned with the implementation details of React Redux, it should only worry about presenting the todo list. So how should we connect the component to the Redux store?

The connect function does exactly that. It wraps your component in another container component. This new component is a Consumer, which can access the store, pull out the needed data, and pass them to our original component as props.

To know which data to pull out, connect takes a parameter called mapStateToProps. This is a function that receives the state from redux, and returns an object which will be passed to the component as props. connect then returns the function that can be used to wrap the component.

This can get confusing so let’s start at the top:

Once we have our connect function defined, we just need to create our ConnectedComponent. To keep things simple, we’ll assume the child component isn’t receiving any other props.

The redux store is an object that contains 4 functions:

For now, all we need is getState, which we can use to access the current state in our container app. We’ll come back to dispatch and subscribe later.

Now that we’ve defined the connect function, we can create our container.

Let’s see how our app’s looking.

Well, sort of. Our app is rendering the todo list from the Redux store, but when we try interacting with our app, we get an error message.

Our Redux store is successfully sending messages to our components, but our components can’t send messages back yet. We need to be able to dispatch actions.

To allow components to dispatch actions, the connect function takes a second parameter, mapDispatchToProps. In React Redux, mapDispatchToProps could be an object or function but to keep it simple, in our version we’ll only accept a function. Similar to mapStateToProps, this function will receive the dispatch function from Redux, and return an object which will be passed to the component as props.

Let’s go back to our app to see if it’s working.

We’re not getting any error messages, but nothing’s changing on the screen. Our state is being updated, but our components aren’t being told about the update. We need to subscribe to the changes.

The Redux store provides us with a subscribe function, which we can use to notify our components whenever there is an update.

The subscribe function accepts a callback as a parameter, which it calls every time an action is dispatched. In this callback, we want to check if our props will change based on the new state and, if they will, pass the new props to the component. The simplest way to do this is to store the current props in the container’s local state. Whenever it is updated, the container will re-render and pass the new props to the child component.

subscribe returns an unsubscribe function, which we need to use when the component is unmounting to prevent Redux from calling the callback unnecessarily.

We use useEffect because setting up the subscription is a side effect. It also allows us to perform the necessary clean up once the component unmounts.

Now we can see the state updates! 🎉

As part of React Redux v.7.1.0, they introduced three hooks that could be used instead of the connect function: useStore, useDispatch, and useSelector. Based on how we’ve set up our react-redux file, these are easy to include in our app.

And that’s React Redux! As I said at the start, this isn’t exactly how React Redux is implemented, but as a mental model, this is what’s going on behind the curtain. We have:

You can see the final code on github or on CodeSandbox.

If you’re interested in learning more about React Redux, Mark Erikson wrote a great blog post called The History and Implementation of React-Redux. In it, he explains what React Redux does, how it works, and how the API and implementation have evolved. Mark also did a talk at ReactNext 2019 based on that blog post.

There’s also an episode of readthesource in which Dan Abramov, the creator of Redux, takes a deep dive into the React Redux code at that time (2016) and shows some of the optimisations and edge cases they had to consider.