A Developer's intro to WebGL

Recently, I have been starting to get to grips with WebGL. Having little to no real previous experience with 3D graphics, there was a reasonably steep learning curve to overcome. So I thought I’d touch on a few of the basics here and share some resources that I found really useful.

WebGL is a JavaScript API that allows for the creation of 3D and 2D graphics within the browser. It renders on a <canvas> element as a drawing context, but provides low-level access to the GPU. The graphics can be made completely interactive; responding to keyboard and mouse events, as well as touch events on mobile devices.

There are tons of great resources out there to introduce the key concepts behind WebGl and 3D graphics in general. I found Luz Caballero’s introduction to WebGL particularly helpful in getting my head around precisely what is going on behind the scenes of all those amazing WebGL examples on the web.

Basically, all graphics in WebGL are made up of vertices and fragments. Vertices are what you might expect; points with x, y and z coordinates defining their position. Fragments are in essence the individual pixels within triangles of vertices. 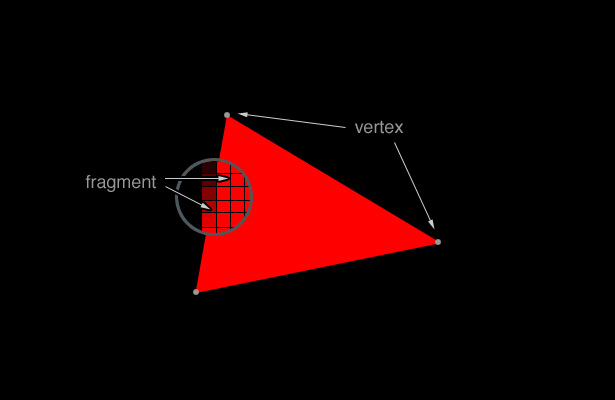 So, to render a 3D image with WebGL, we essentially build up the image out of triangles. We tell WebGL where we want each vertex, how we want the vertices to be connected into triangles, and how we want both the vertices and the fragments between them to be shaded.

We’ve very briefly covered how WebGL 3D graphics are created. Which may seem simple enough, but in practice it involves several quite mathematical, and perhaps not very intuitive steps. So how does that scale to rendering cubes, or spheres, or aquariums?

Short answer: a fair amount of work and usually the use of a library to abstract away some of the more tedious and repetitive tasks.

Using libraries, you can go from painstakingly crafting spheres out of triangles to just calling a few simple methods. This also has the pleasant side effect of making your code a little bit nicer, and a lot shorter.

There are lots of WebGL libraries out there. A few worth looking at are: * Three.js * PhiloGL * GLGE

Check out Paul Lewis’ tutorials for more information on using libraries (Three.js in this case). Incidentally, the tutorials on shaders are also worth a look.

For a far more detailed walkthrough the principles behind WebGL and creating your first 3D graphics, I strongly recommend Giles Thomas’ “Learning WebGL” blog. The lessons are adapted from a popular series based around game development in OpenGL, and they cover everything from spinning squares to nicely lit, interactive globes and more.

Which WebGL drawing call should I use?
WebGL presents you with a blank canvas (literally!) and leaves you with what feels like an overwhelming set of decisions to make before you can render your idea on screen. This post introduces a quick reference guide to picking the right draw call for those trying to decipher the difference between drawArrays, drawElements and their oddly-ANGLE'd instanced equivalents.

I'm Adam. I am a full stack senior developer, interested in all things web.