In the past three months I’ve experienced a great deal of change. I finished my final exams in May, moved home in June, and graduated in July with a degree in Computer Science and Mathematics. This summer formed a pretty exciting chapter in my life, and by no means was it finished!

Monday, August 7th, marked the day I joined Scott Logic in Edinburgh. Early that morning I prepared myself for a 0730 departure to the Newcastle office where I would begin my induction week. There were eight of us making the same commute with similar questions whirring around our heads. What is it like to work for Scott Logic? Will the other graduates be good to work with? Will we feel we belong to our new roles? I hoped this week would answer it all.

The Head of Development in Edinburgh, Murray, kindly invited the Edinburgh graduates out for lunch the previous week. This proved hugely helpful on Monday, since I was quick to locate the other graduates at the train station. We were eager to start the week, and learn more about the job. Then the tannoy sounds. Our train was cancelled. Good start. We found ourselves waiting another half hour before we could board the 0800 departure instead.

As team building exercises go, staying together aboard an overcrowded Virgin train was a pretty good one! We alighted in Newcastle slightly later than planned, and quickly reached St James Gate where the Newcastle office is based. The itinerary was provided to us long in advance: This was our opportunity to meet the other graduates, hear about the company’s existing projects, and learn about three of the key disciplines in the business: UX, development, and testing.

The first two days were dedicated to meeting the Newcastle team. We received a range of presentations on the history of Scott Logic, what the current projects were, and where the company was heading next. Speakers for the presentations included Gary Scott himself! The Managing Director took the time to meet us on the Monday afternoon, and provided an excellent insight into company values and goals. He was keen to hear our thoughts on these matters, and we appreciated the opportunity to contribute to this. In the end we received a great welcome from everyone who presented, and we felt that we joined a team who really would take the time to help us excel in our careers.

As well as seeing the Newcastle team, we were keen to meet the other graduates too. In total there were 16 of us joining the graduate programme this August - two from Bristol and six from Newcastle, in addition to the Edinburgh group of eight. We offered a range of experiences and skills which would prove useful not only for work, but for the team building exercises too. 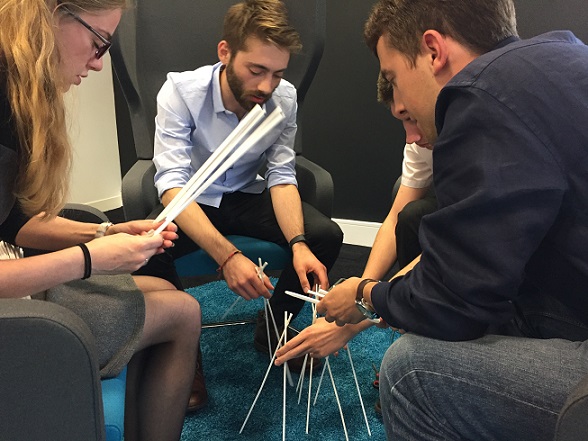 The first of these exercises was to build bridges given a collection of straws and a roll of tape. The task was simple: Whoever built the strongest bridge won! Divided into teams of four, I worked with Heather from the Edinburgh office, and also met Matthew and Elliot from the Bristol and Newcastle offices, respectively. We built ourselves a fine bridge, which was able to hold one of the many textbooks provided to test its strength. Some bridges were stronger, others were prettier. It was great to see the different approaches each team took to building their bridges!

For the second exercise it was crucial to know the company’s core values: Excellence, passion, collaboration, respect, and professionalism. Divided again into groups of four, each team received £5 to spend. Our mission was to buy products which reflected these five values. Working this time with Jamie, Matthew, and Siobhan, we toured Newcastle’s discount stores for cheap goods which satisfied our criteria. 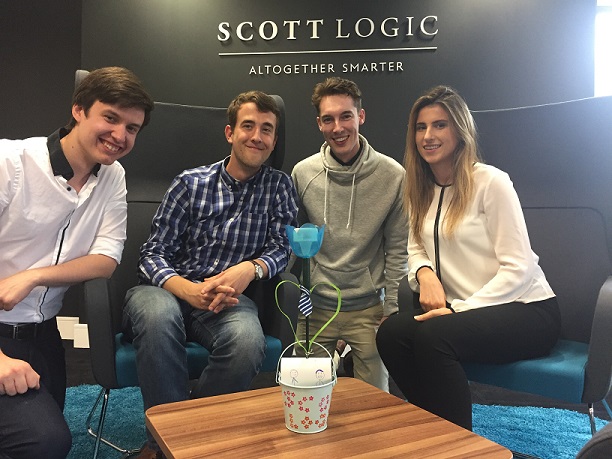 Our basket in the end held an LED flower, a bucket, a mini tie, and a collection of star stickers. “How on earth do they tie into Scott Logic’s core values?” I hear you ask! Let me try and explain …

The flower represents growth. As the company grows, the team continues to hold its core values. Everyone is treated fairly and equally, and everyone’s voices are heard. The flower is supported by the bucket to present itself as a fine illustration of collaboration. The leaves on either side of the flower were tied down to form the shape of a heart - showing the passion in our work. The tie demonstrates the product’s professionalism, and the star stickers represent the excellence of the work. We presented this to the judges, including Gary, and convinced them (as well as ourselves) that this reflected all the core values.

With these two team building exercises complete, the graduates had settled in and we were ready to begin work on a larger task. The remainder of the week was split into three parts, with a day dedicated to each of UX, development, and testing.

Wednesday was UX day. Three UX designers based in Edinburgh (Rui, Helen, and Chloe) made the trek down to Newcastle for this project, which we fully appreciated. Arguably one of the best parts of the induction week, UX was new to most of the graduates joining Scott Logic this month.

We were divided into three teams, each interviewing one fictitious client. Represented by the visiting UX designers, Helen joined my team, and introduced herself as Erin. After a short consultation with Erin, my team decided to develop a social trading app - much like a normal app, but with built-in messenger tools to keep in touch with friends and work colleagues as you trade.

We spent our day on design, breaking down the new app proposal into several screens we could work on. Each member of the team designed several drafts for a particular screen, and we would compare our work and collaborate to form a new design based on the best features from everyone’s ideas. We followed this process for a few screens, and in the end we designed ourselves a nice app, and we like to think Erin would enjoy it!

Following from our day with UX, it was time to begin developing our own trading app. Working in pairs, we settled down in front of our machines and fired through a range of exercises on Java, JavaScript, CSS, and more, to come to grips with a selection of technologies used by Scott Logic today. For each exercise, we received a quick tutorial or presentation from a member of the development team to help us warm up. Coming from a background where I held little experience working with JavaScript or CSS, it was good to gain an insight into these languages before settling down to work with them. In the end we developed ourselves some cool new features to buy and sell trades, and it was great to see how everything tied together to form a working app.

With UX and development complete, it was time to learn how to test the application. We spent our final day learning about unit testing, exploratory testing, and test-driven development. First we returned to our pairs to debug a fully implemented trading app - finding as many flaws as possible - before implementing unit tests to determine whether or not particular components were working as expected. In the end, teams who found themselves the most interesting bugs won themselves a prize!

That wraps up the working week. We met a huge number of the Newcastle team through the presentations, team building exercises, and tasks across UX, development, and testing. This induction week wasn’t all about the work though - there were plenty of opportunities to meet everyone outside the office too! Our evenings were booked with plenty of activities to enjoy whilst we visited Newcastle - ranging from bar visits, to pool competitions, to go-karting.

The go-karting is likely to be the most memorable moment of the week for me. Before entering the track, I held no experience with karts or driving of any kind. You can imagine the fear in me seeing the track and the karts waiting behind the starting line. With a little encouragement from the other graduates, I convinced myself it would be good to join the race. In the end I found myself really enjoying it, and by some miracle I never drove off the track! Certainly if another opportunity arises to take up go-karts, I’ll be adding my name to the list.

Three weeks later, the Edinburgh graduates have settled into not one, but two offices! We’re in the process of re-locating from George Street to Grassmarket in Old Town. Whilst we settle into the new office, we’ve dedicated our time to a range of new technologies. As well as writing this blog post, I’m learning how to use React and Redux to produce views for a trading application. Both of these technologies would often be thrown into conversation when I talked to other developers about their projects, but until now I held little understanding about how they worked. It’s satisfying to better understand this, and gain an insight into why they are so appealing to use.

The past month has been superb. I’m sure I speak for everyone when I say we’re loving the work, and looking forward to the projects ahead. Now is as good a time as ever to pass on our thanks to everyone who organised the induction week for us - in particular Joel and James, who kept us right and made sure everything ran smoothly throughout. If you think the graduate programme would appeal to you, check out the graduate programme page for further information.

I'm a software developer at Scott Logic, Edinburgh. I joined in August 2017 after four years studying Computer Science and Mathematics at the University of Edinburgh.