Last week, designers from across the globe gathered for the annual Interaction conference. This year’s event was held in Lyon, with the aim of reflecting on how technology and design are shaping the world moving forward by building bridges across cultures, disciplines and industries to reach shared goals. The conference’s fantastic venue, a former sugar factory warehouse, acted as a suitable reminder of the forward-moving world we live in. However, the venue’s location at the confluence of the Rhone and Saone rivers proved an even more appropriate metaphor for the convergence of the seemingly contradictory themes that emerged during the week: one of optimistic creation of new, better solutions to existing frictions, the other of caution about the world we are shaping. 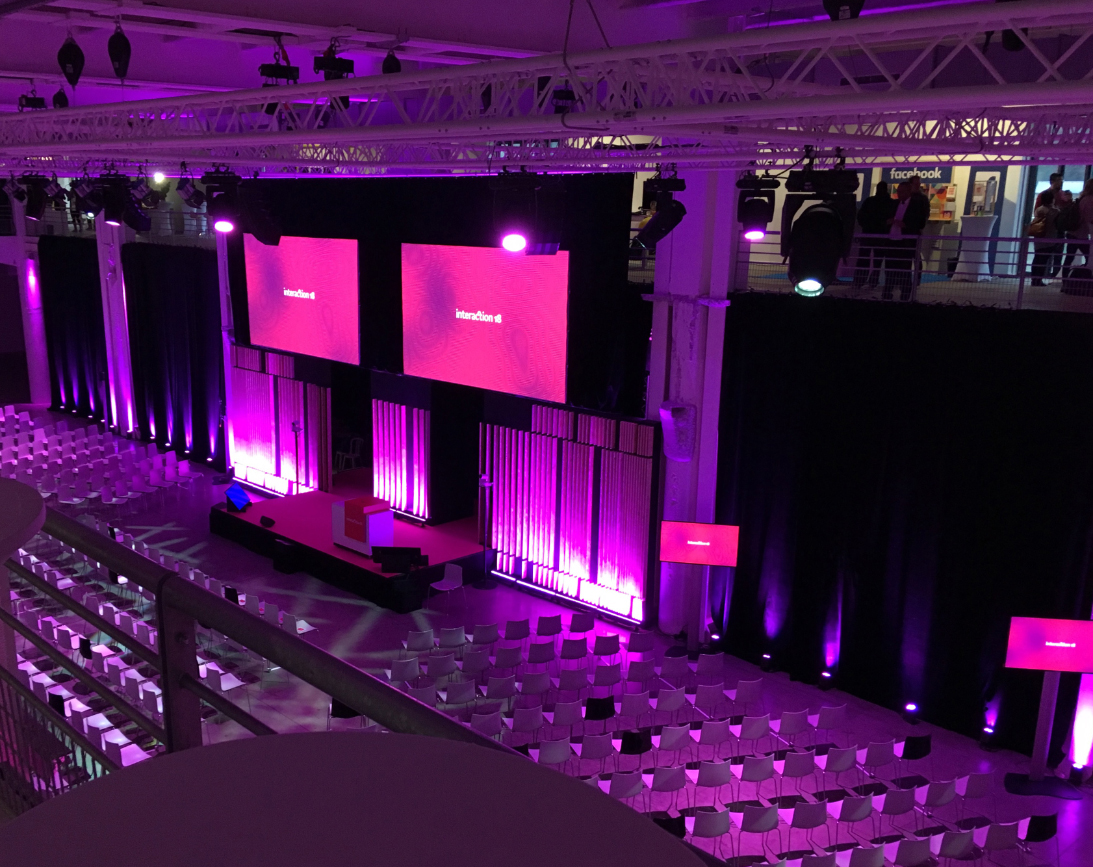 The cautionary theme was established from the outset of the conference in Alan Cooper’s opening keynote. Titled ‘The Oppenheimer Moment’, he started by drawing a parallel between where we are now in the world of technology and Oppenheimer’s situation before the time his first atomic bomb was dropped: we currently have the potential opportunity to vanquish evil when it is tiny and vulnerable rather than waiting until it is too late. He put forward that we should think in terms of “being a good ancestor” rather than “doing no evil”, and introduced his Ancestry Thinking framework for considering and identifying where we might be misstepping in systems that we create. 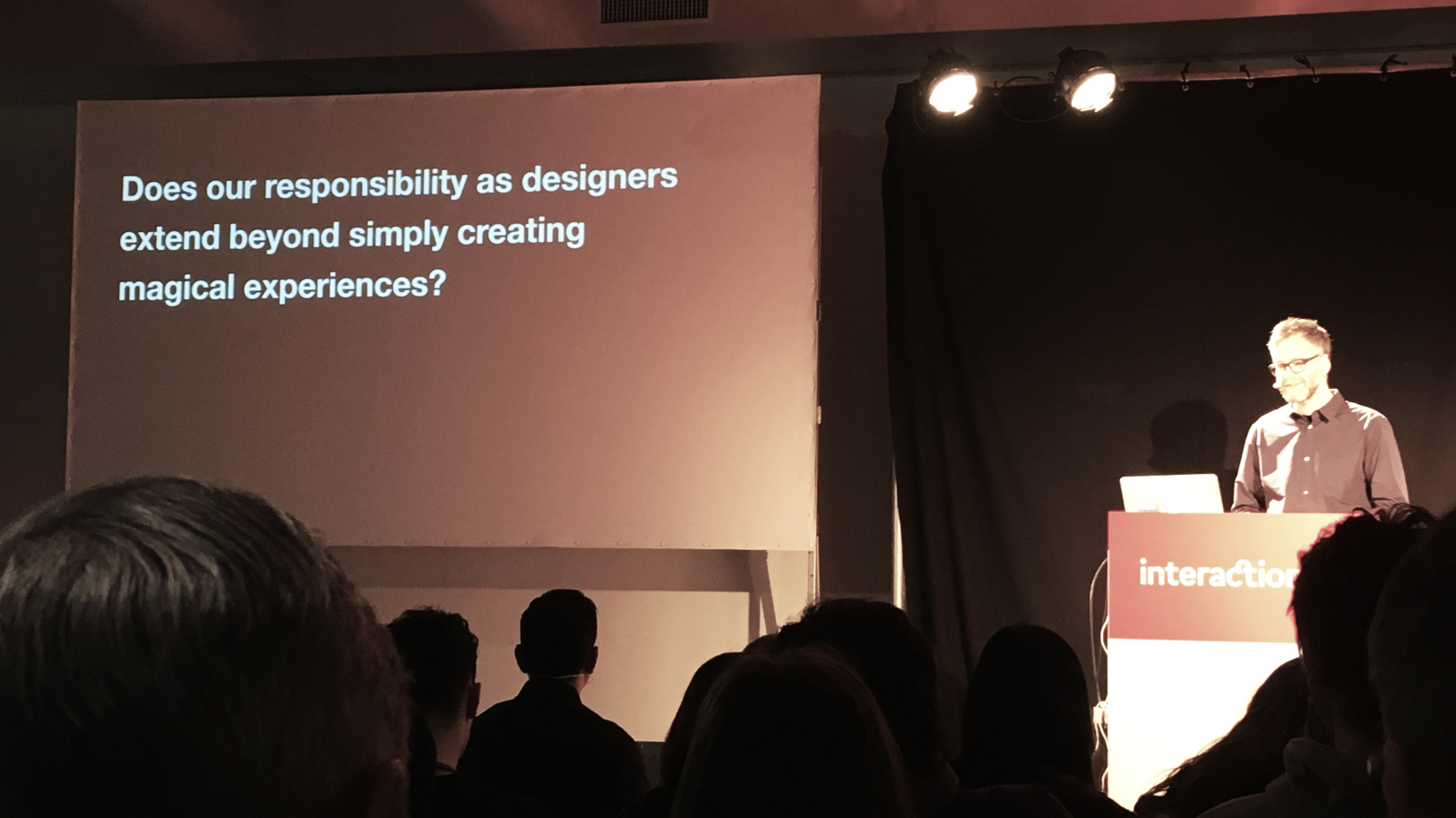 He highlighted that while history shows we’ve always been afraid of technological advance, maybe today’s emerging techs require a different level of evaluation to those in the past due to their new level of complexity and speed of progress – and therefore potentially unforeseeable consequences with little time for course-correction. As an example, he posited how detailed knowledge of the individuals involved in the self-driving car Trolley Problem might significantly change the ethical questions it raises.

On a less abstract level, Stuart Reeves shared insights and genuine examples from his research into real-world use of Alexa. While entertainingly familiar, it highlighted how far removed from the futuristic ideal we really are with these technologies, once you remove your rose-tinted glasses.

Jonathan Lewis’ talk, Designing Cryptocurrencies, served as an insightful and thoroughly informed breakdown of the various aspects of cryptocurrencies that require concerted design consideration, both in terms of the network itself and its broader impact. 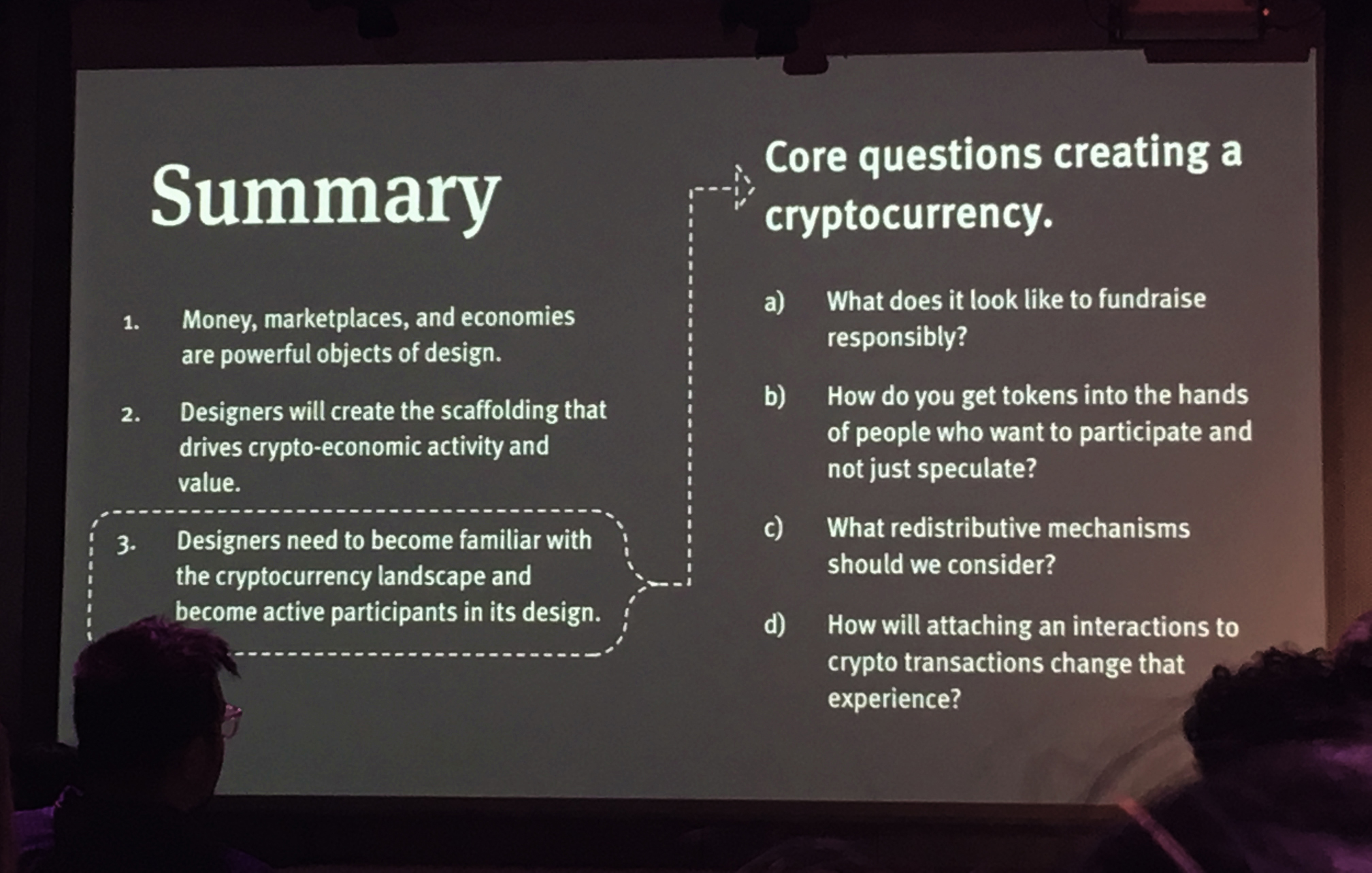 Quite fundamentally, he pointed out that “money doesn’t lie”; the story money tells about who you are is concrete and measurable… And therefore, “are there aspects of the human experience we should not attach to a cryptocurrency?” (consider, for example, Brendan Eich’s BasicAttentionToken…)

The more optimistic theme around the possibilities new technologies are creating was captured in numerous more case-study-like talks. For example, in her keynote, ‘Innovating technology for a diverse future’, Haiyan Zhang showed examples of her work at Microsoft Research and as part of the BBC’s Big Life Fix where she used design thinking and rapid prototyping to create new possible futures for people with disabilities. Cheryl Platz shared the insights she gleaned in taking the Amazon Echo Look from vague idea through to consumer product. And, Apaar Tuli shared Whim’s vision of Mobility As A Service and how they are going about creating that future.

A number of talks also explored broader concepts for designing better experiences. Yogesh Moorjani gave a very compelling and practical introduction to Anticipatory Design, while Nicolas Nova took us on a history lesson through some French technology icons to make the point that there is much we can learn from the past to explore non-Microsoft/Apple interaction paradigms. He showed how the Minitel had a design system that still (mostly) holds up today, and how Teletac is a fantastic early example of interactive experiences using common household items (see Nintendo Labo as a modern example). 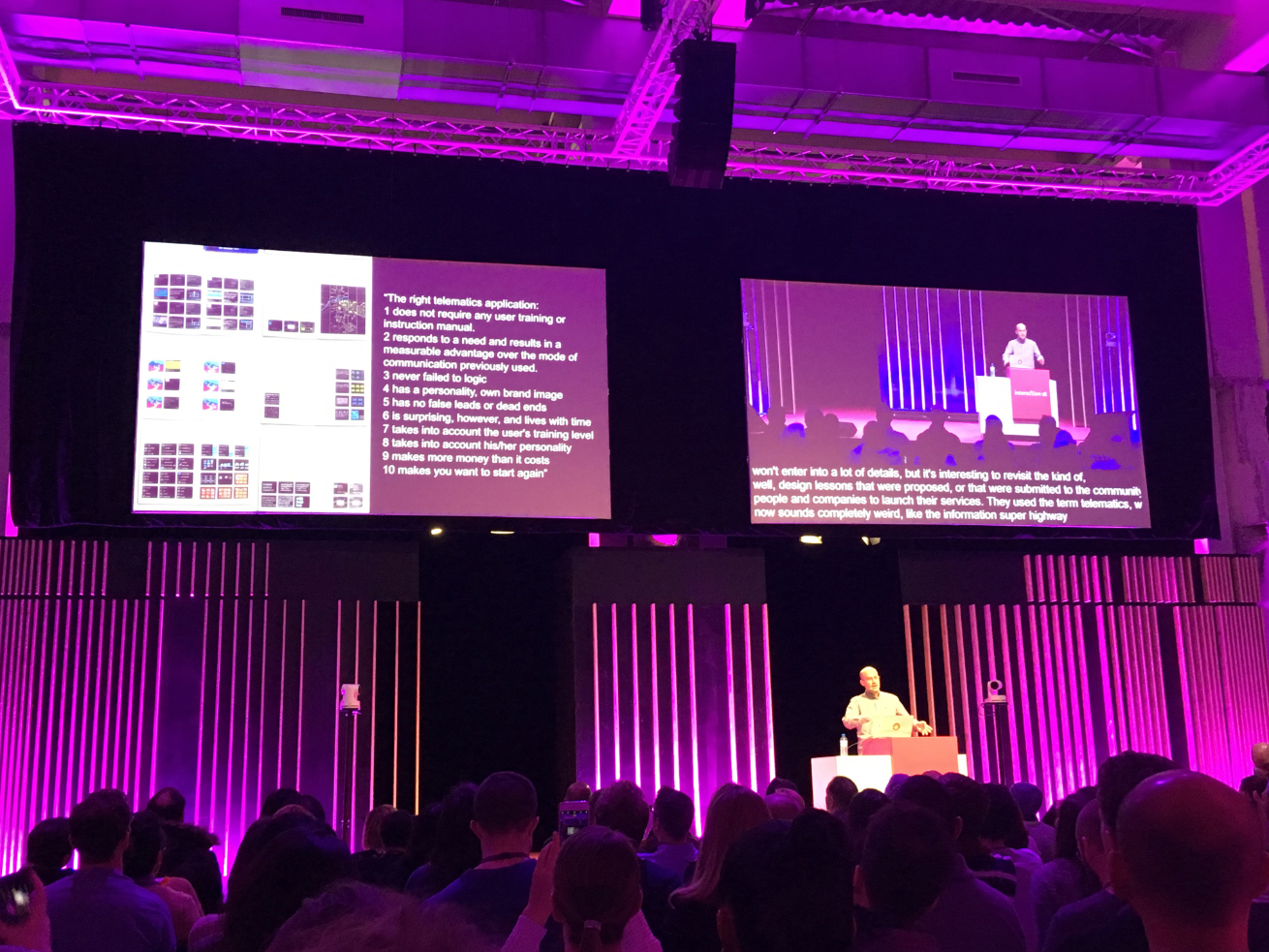 It was ultimately Milan Guenther and Tomomi Sasaki who provided the most inspiring yet practical insights for making an impact at scale. In their talk, ‘Design To Ignite’, they shared their experience adapting Google’s Design Sprint as a tool for accelerating organisational transformation. Using case studies they explained their categorisation of four different flavours of design sprints: 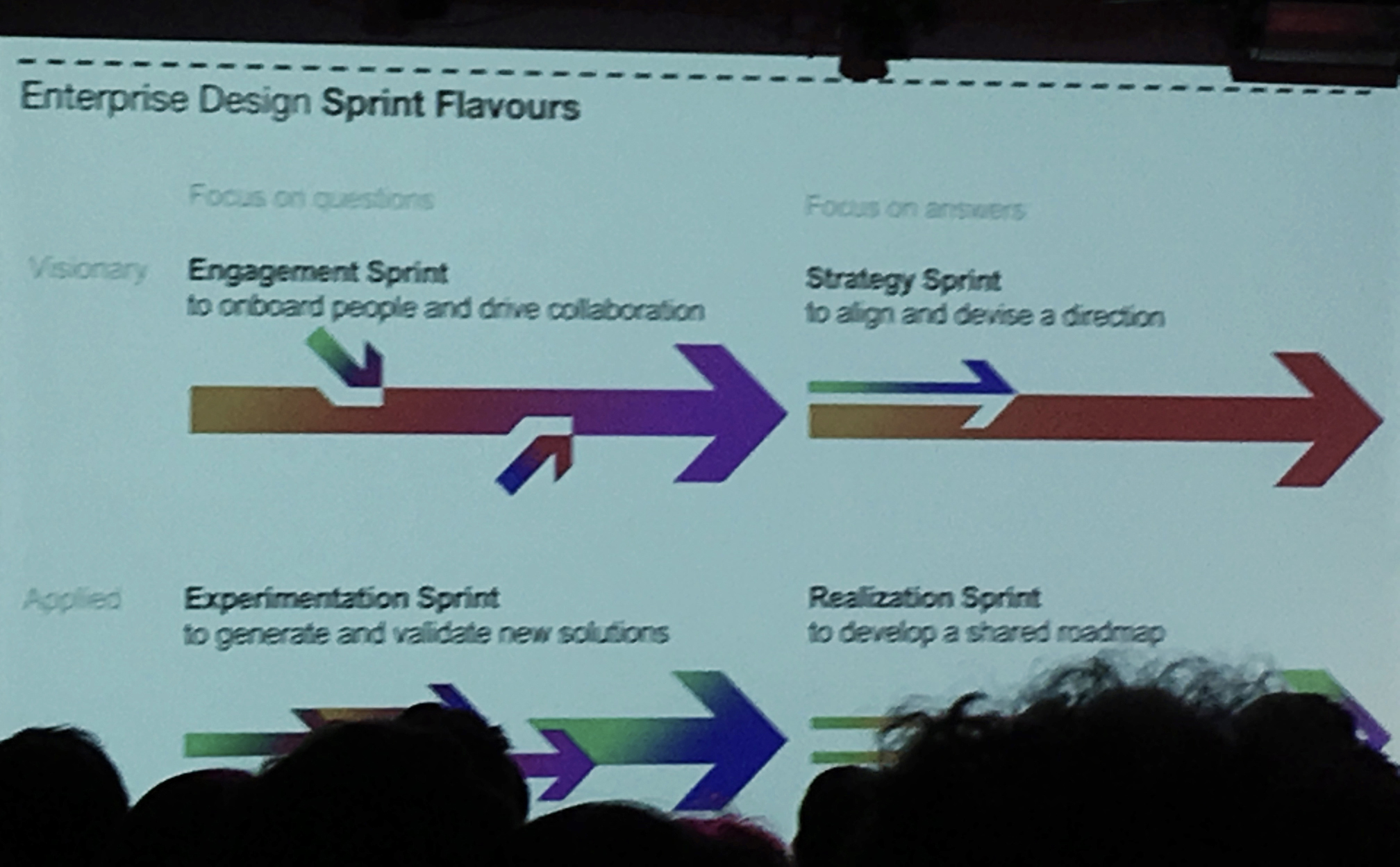 Given Milan and Tomomi’s evident success in affecting change – and given they had the nerve to run a 2-day sprint camp with 70 people across 12 groups – I strongly recommend checking out their Enterprise Design Framework if you’re a proponent for Agile and organisational transformation.

Fittingly, Leyla Acaroglu’s closing keynote, Design Ethics & Systems Change, acted as the confluence of the conference’s two undercurrents. Starting from the forward-looking position of Buckminster Fuller’s assertion that “you never change things by fighting the existing reality; to change something, build something new that makes the existing obsolete”, Leyla entertainingly explored the problems cognitive biases (or “brain glitches”) create in the world in order to clarify our need for a systems mindset. That is, we must recognise that every small thing is connected to larger systems, and those larger systems are themselves nested. As such, to change any system, we must have a balanced understanding of both its universe level scale and its microscopic level scale. Leyla closed out by introducing her Disruptive Design Method as a tool to activate change, whilst maintain a suitable degree of informed caution. 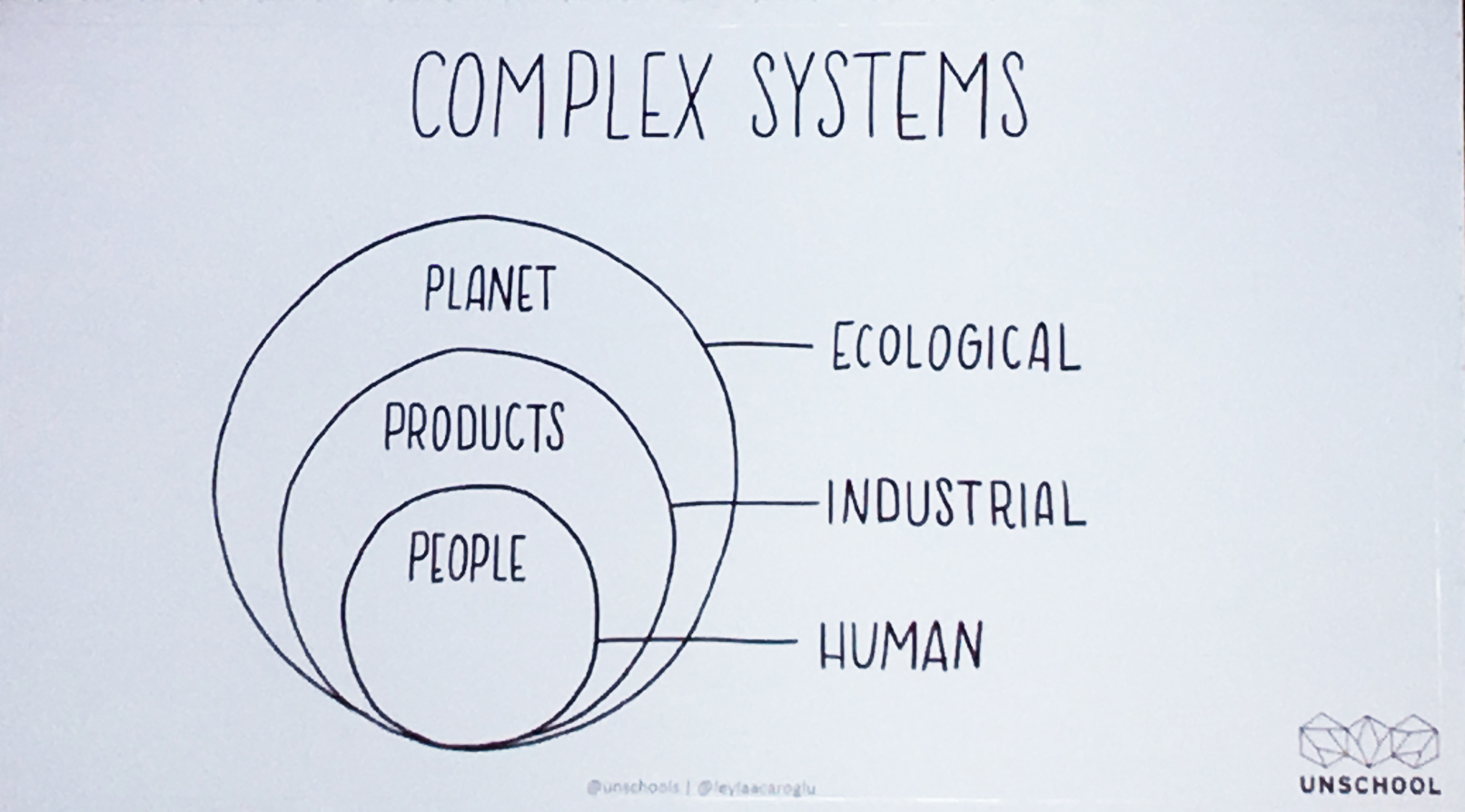 In a possibly throwaway comment, Leyla neatly captured what everyone in our industry must recognise and live by:

"Everything with integrity requires tension. Everything that has any value in the world has had a sense of complexity or challenge."

Neither blind optimistic creation nor crippling pessimistic caution alone will improve our situation. We need open disagreement, discourse and discussion to maintain a healthy balance between opinions to maintain sustainable forward momentum towards a better future. I am proud to be part of a global community that agrees with this sentiment. Thank you IxDA.

Thank you also to AdobeXD. After extensive testing at your stand I now know:
Waffles:
Waffles on sticks:

Interaction 16
On the 1st of March myself and Graham Odds travelled to Helsinki, Finland to attend the 8th annual Interaction week.