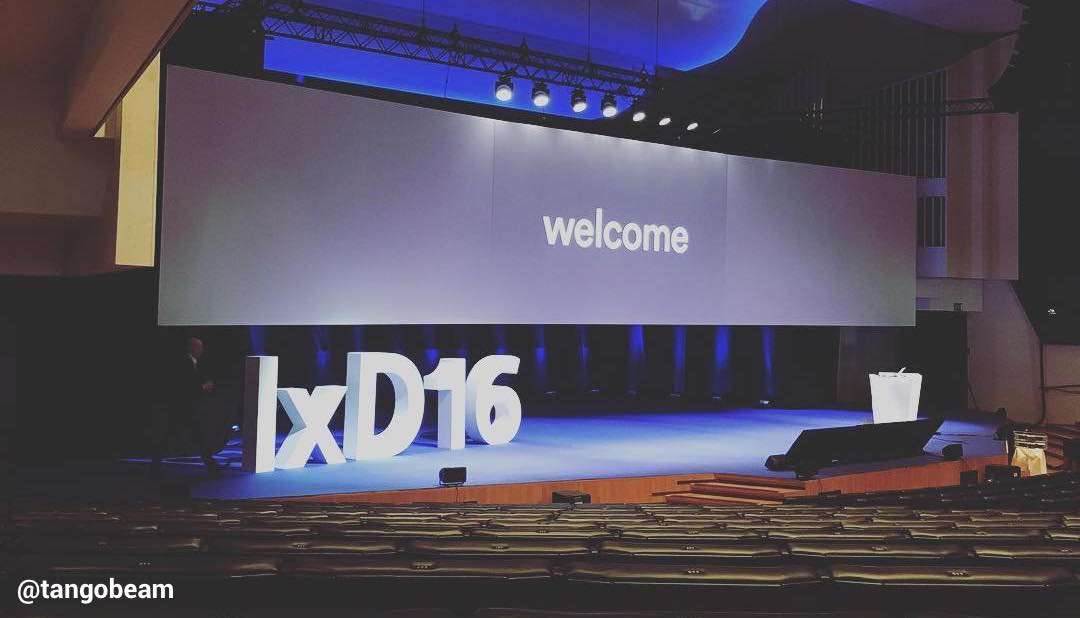 On the 1st of March myself and Graham Odds travelled to Helsinki, Finland to attend the 8th annual Interaction week. The three day conference boasted 5 keynotes and over 100 speakers. Located in the prestigious Finlandia Hall, designed by world renowned Finnish architect Alvar Aalto. The conference theme was ‘What’s next and beyond?’, in the context of interaction design as a craft, as a profession and a design practice as a whole.

Marko Ahtisaari’s keynote kicked off Interaction 16 with his thoughts on the ‘where next?’ theme by discussing a quote from fellow MIT Media Lab colleague Danny Hillis:

We have become so intertwined with what we have created that we are no longer separate from it. We have outgrown the distinction between the natural and the artificial.

Marko reflected on the fusion of design and science practised at the MIT Media Lab as well as previous experiences at Dopplr and Nokia Design Studios, before discussing his recent work at the Sync project, a global collaboration which aims to harness the power of music for health. Sync is applying machine learning to a dataset, combining music listening and its biometric effects, to develop music as personalised medicine.

John Waterworth at GOV.UK presented the challenges encountered in re-designing the UK’s government services. Prior to the project’s initiation several siloed public services existed, all of which varied in style and functionality. The GOV.UK team’s aim was to create a single government site which transformed the relationship between the UK’s citizens and government. Besides the obvious redesign of the site, the GOV.UK team created a set of design guidelines, as opposed to rules, which encourages a community of designers and researchers to continuously discuss, challenge and update the guides. These materials are publicly available.

Tristan Ferne of the BBC Research & Development team gave an absorbing talk about the use of structured stories to create powerful and compelling experiences. The talk discussed how a data-driven but user-centred approach to structuring and designing stories could result in novel or new experiences, coining the technique as ‘atomised news’. Storylines, moments and people could be broken down into ‘atoms’ providing corresponding ‘jump-off points’ or timelined associations.

The second day was kicked off by the keynote speaker Kate Darling and her talk ‘Robot Ethics and the Future of Human-Robot Interaction’. The talk centered around the almost compassionate interactions between humans and robotics. Where users would project humane properties onto robotics in order to provide themselves with a greater understanding or acceptance of the scenario which presented itself. Kate provided the audience with examples of this empathic understanding across a variety of industries and users, from military to toys, children to pensioners.

Henrik Rydberg’s talk gave an interesting insight into the role of the creative director. His talk ‘Confessions of a Creative Leader’, outlined the changes in his role: he no longer considered himself a designer, nor did he admit to being ‘design focused’. Henrik highlighted that the design output of a creative leader is nowhere but everywhere at the same time - the background, environment and culture of a company are all considerations of a creative leader. That teams should strive to create a culture of unity where ‘we did it!’ always trumps ‘I did it!’.

‘Passengerhood: On the Road to Autonomy’ by John Rousseau was an intriguing exploration of the future of the (semi-)autonomous car. The talk focused on the complex transition towards autonomous experiences in the near future. John suggested that this progression must first establish customers’ trust in the technology, before carefully nurturing subsequent technologies associated with partial autonomy. The talk counterbalanced the ‘big-bang’ style work such as Google’s driverless car, with the partial autonomous vehicles being introduced by the majority of car companies. John suggested that most effective way to create the perfect autonomous experience is through human centered design models, which will incrementally propel us towards full autonomy and passengerhood.

Stand-in keynote speaker Josh Seiden, of Lean UX fame, used his talk ‘Learning from Live Systems’, to discuss the benefits of live-launching early in the design process. Josh suggested that the methods we use to design, build and launch are based on techniques created whilst working on last-generation of technology. In situations where requirements are unknown it could be more beneficial to respond to a live system, managing outcomes as opposed to requirements and features in order to achieve your aim. Using this methodology designers could exploit continuous learning to develop detail as their certainty of issues increases.

Tricia Wang’s keynote ‘Design in a Wiggly World of Mirrors, Virtual Reality and Big Data’ opened the final day of Interaction 16. The fast paced, engaging talk challenged the notion of perspectives when designing. Tricia highlighted the importance of context over content during the design phase. Tricia cautioned that concepts such as big data and VR, whilst seemingly objective, inevitably contain some reflection of their original creator.

‘When Everything goes to Hell in a Handbasket’ by Scott Plewes and Barb Spanton, offered a 5 point plan on how to re-evaluate a project after disaster strikes. Suggesting that re-orientation and transparency can provide a route back to calmer waters.

Mercedes-Benz designer Ricardo Aguilar gave an insight into the connected car. His talk ‘Designing Experiences for the Connected Car’, outlined the automotive experience in 3 environments; before, during and after driving. Furthermore the talk provided an insight into potential future developments such as vehicle to infrastructure and vehicle to vehicle connectivity.

Sol Mesz gave an insight into designing for a multi-touchpoint, multi-device future. In a market where users start a task on one device and finish it on another, creating a seamless experience between devices could be key not only for users, but for businesses as well. The talk covered the 4 dimensions needed to successfully design the multi-screen experience: product, user, context and experience (an approach not dissimilar to that we advocated in our ‘Making Technology Disappear’ white paper on the same topic!). Sol encouraged designers not to limit themselves to devices or screen, but to considering the ecosystem of devices in which users operate.

The final keynote of Interaction 16 was Architect and Humanitarian Cameron Sinclair, with his captivating talk ‘Design for Life’. Drawing on his own experiences within the world of architecture, Cameron encouraged all designers make a difference to those less fortunate than ourselves. Using the provocative statement, ‘Designers are in the top creative and intellectual 1% of the world. If they are engaging in any form of charity that doesn’t involve their design skill, they are wasting everyone’s time.’

On a personal level I thoroughly enjoyed Interaction 16, the level of speakers was sublime and would like to personally thank IXDA.org for making it possible. Bring on Interaction 17 in New York!

View more by Will Loveland
View all UX Design articles

I'm a User Experience Designer at Scott Logic. My interests lie in the future of the in-car experiences, working with complex systems and cat GIFs.