Developing with Redux makes managing your React state easier, but if not integrated correctly it can remove key advantages of using React, wrecking your application’s performance. This blog will outline how I managed to create a painfully slow React app and the steps took to correct it.

Our team was tasked with creating a tool to allow users to add and edit into a hierarchy of data. Our React application was zipping along nicely until the user viewed a page with hundreds of components displayed. This shouldn’t have been an issue once the page loaded as React should only render what is required for state changes. But the page ground to a halt on every state change. Something was obviously wrong. 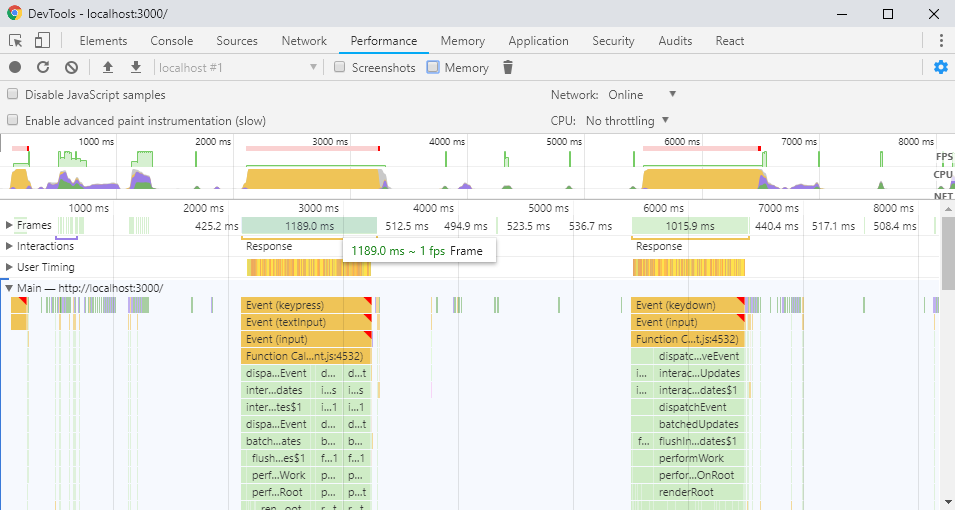 I’ve reconstructed the issue in a small JSFiddle to demonstrate the issue we faced in the application, visualising the render changes with a simple counter every time render is called. Pressing a monkey causes the Redux store to update the ‘clicks’ value. ‘Clicks’ is not passed into the component and nothing else in the store has been updated so why does the component render again?

See if you can spot what is causing the component to keep rendering and causing the performance issue.

The filter in mapStateToProps was to blame for the multiple renders and the performance woes the application was experiencing. Let me explain…

I’m beating up on filter a bit here but anything that creates a new instance of something in mapStateToProps will show the same behaviour, I’m looking at you map!

The application regularly had 100 individual components on the page using mapStateToProps with either filter or map causing them to render for each state change. Not ideal.

The Solution for Comparing States

After finding what was causing our performance issues I implemented a naive solution to work around the issue by moving the filtering out of mapStateToProps and into the render function of the component.

While this solution does solve the performance issues it isn’t a satisfying fix. It has meant that the component is now dealing with more than just displaying the props and must know more about the data that is getting passed to it as it is doing the filtering as well. Thankfully there is a better way!

After reading around this subject for this post I found the magic Redux solution for this issue which is well hidden in their documentation judging by the number of “unknown performance trick” blogs.

The connect function allows for additional arguments to be passed into it to configure how the component updates. The areStatesEqual option allows developers to override how the state is checked.

This allows for the component to remain unchanged from the original implementation and the connected component will only render once the relevant change has happened. In the example above, if emoji store hasn’t changed then mapStateToProp doesn’t run. Therefore no new instances are created and React doesn’t render again. Problem solved!

React and Redux are great together, but if you aren’t careful with the implementation it is all too easy to introduce performance overheads into your application creating a slow user experience.

Slow Code HATES him! Optimising a web app from 1 to 60fps
After hearing about Svelte, a performance-first web framework, I tried it out in a web-based Minesweeper solver. SHOCKINGLY, it didn't automatically make my code fast - that took a process of iterative optimisation

Steven Waterman · 17th  Feb 2020 · 10 min read
React time travel: the store may not be enough
Your store is the source of truth... as long as it makes sense. A concrete example integrating Redux with React Router

I'm a Software Developer at Scott Logic's Bristol office. Experienced in .Net with a growing interest in JavaScript and React