I had the pleasure of attending the FinTech Design Summit 2019 which pulls together some of the world’s most innovative FinTech companies including Monzo and Google Pay. The Summit exclusively targets senior design professionals and FinTech leaders, and focuses on Product Design, UX and Strategy.

So many interesting points were raised in the talks and panel discussions. These ranged from how to foster and preserve a culture of innovation in a growing organisation, to how banks can become leaders in the FinTech world at a time when they seem behind the curve. In this post, I focus on one angle of the Summit, which puts people’s emotions at the center of FinTech Design.

We know that emotions can move markets through optimism and pessimism, but what about apathy, stress and the embarrassment that we feel when discussing our finances?

Designing for emotion is not a new concept but perhaps it has been overlooked in FinTech. During the FinTech Design Summit 2019, we were asked to confess something embarrassing about our finances to the person next to us. The person next to me very candidly shared that he can be a bit tight sometimes. My confession was that “I would buy almost anything on sale”. Finances spark all sorts of emotions from stress and shame to excitement and happiness. For many people, It often tends to be the former. It is not surprising that when you google “finances are…” the results portray the stress that people feel because of their finances. How can we trigger positive emotions about finances and how can we make people feel empowered? 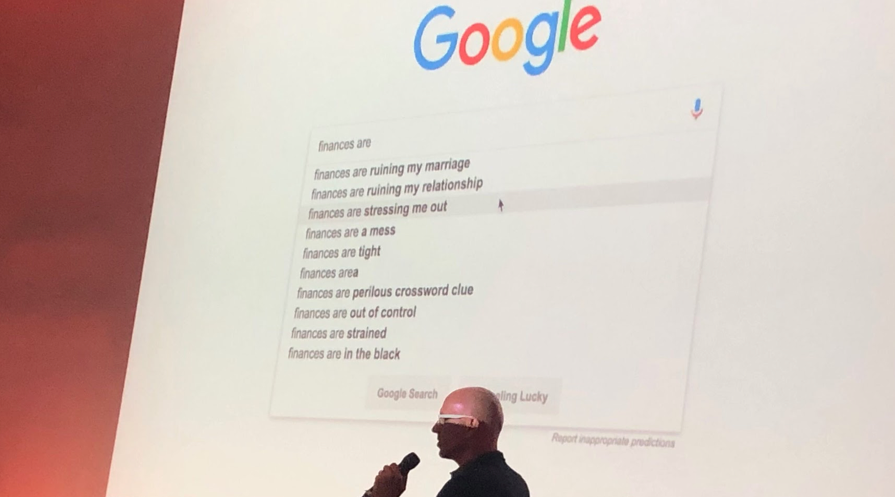 A key step in helping people feel empowered is by getting them interested in and helping them understand their finances.

Jan Hazelwood, Group Creative Director at R/GA talked about how branding can be powerful in targeting people who aren’t usually interested in their finances. Branding can make them feel that a certain product speaks to them. She worked on the design of a UAE banking app called liv, which targets millennials and focuses on their lifestyle. 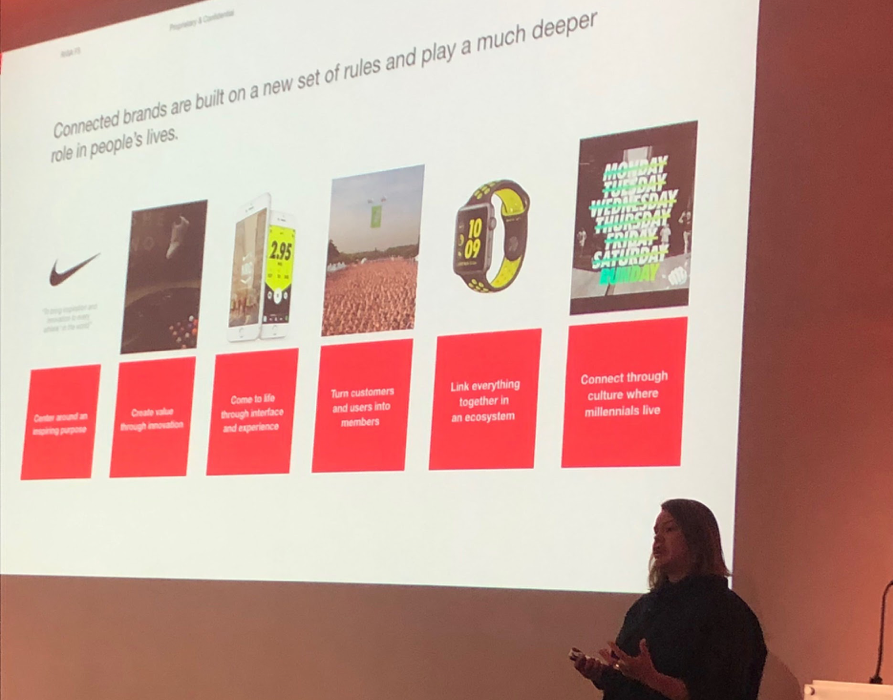 Raising financial literacy and guiding people throughout the journey 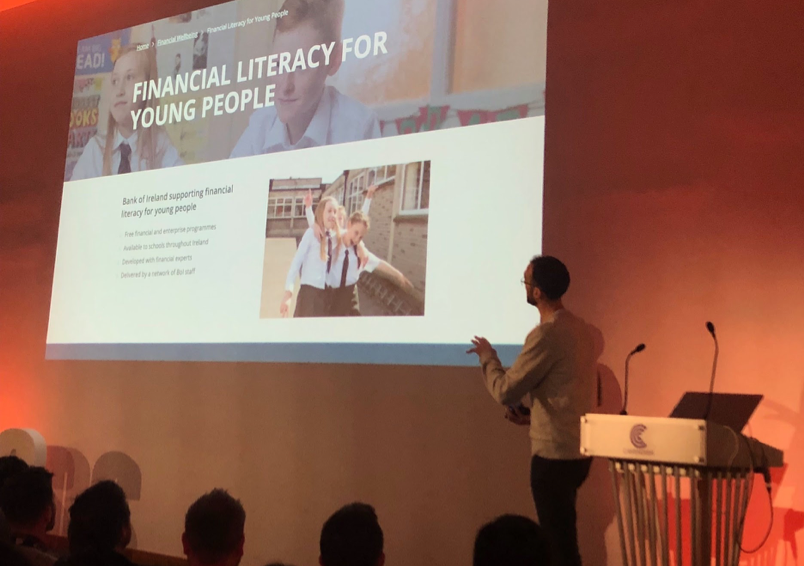 Joel Bailey, Managing Consultant at EY Seren talking about the Bank of Ireland Financial Literacy and Entrepreneurship programmes for primary and secondary schools.

Joel Bailey mentioned the work EY Seren is doing with the Bank of Ireland to raise literacy in secondary schools in Ireland. The program offers students basic financial education and helps them manage their finances from a young age.

Dan Makoski, Chief Design Officer at Lloyds, also emphasized the importance of helping ordinary people make sense of finance. He described how they are using narrative to do so. He mentioned the Stanford Marshmallow Experiment to explain how people’s behavioural traits can differ and stressed the necessity of catering for these differences. Some people might need more guidance than others in terms of being able to prosper financially and feel in control of their life.

Vuoko Aro, Design Director at Monzo gave an interesting example of how we can help people with their finances. She talked about how they used an MVP (Minimum Viable Product) approach to help people save small amounts of money from spare change through the Monzo app’s “coin jar”. One of Monzo’s engineers edited their code to automatically round up the money you pay for each transaction and put the change in your coin jar. Monzo informed users that they can name a pot “coin jar” to opt in and start saving spare change. Their users saved 1 million pounds in 2 months, which confirmed the appetite for this feature. Monzo then invested in building a UI to support it.

The cultural context is key

Designing financial services that trigger positive emotions requires a focus on people, but also culture and context. We need to understand how people can interpret a message differently based on the context, in order to adapt our services and products to communicate effectively. For example, something as simple as a date and time format can be interpreted differently in different countries. 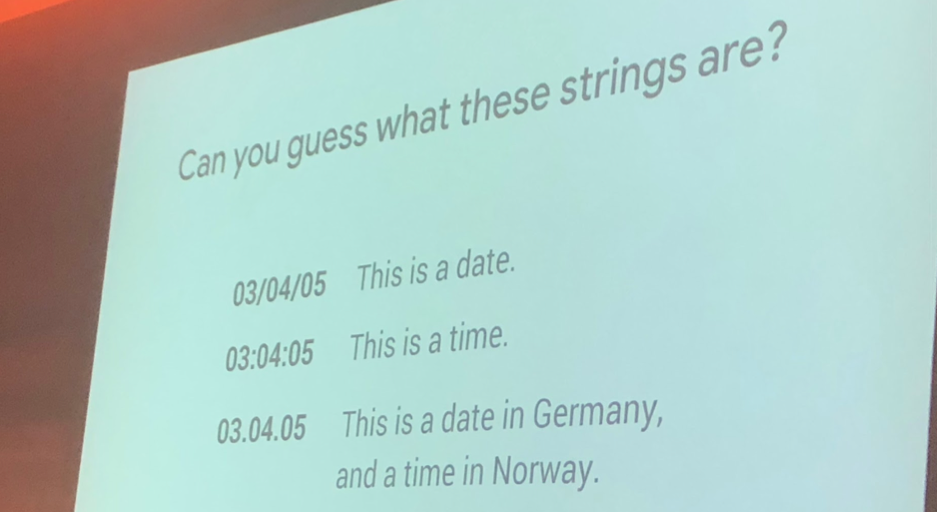 Skip Alums, UX Manager at Google, showing an example of how the same string has different meanings in different locations.

Skip Alums, UX Manager at Google Pay, gave an interesting example of how Google Maps adapts to context. The application in India provides directions in a similar way you would give directions speaking to another person there, rather than a list of street names. Being Lebanese, I relate to that because in Lebanon, people often don’t know the street names and there isn’t a numbering system for buildings or houses. Understanding the culture and the context in which we are designing financial services is key to creating positive experiences. 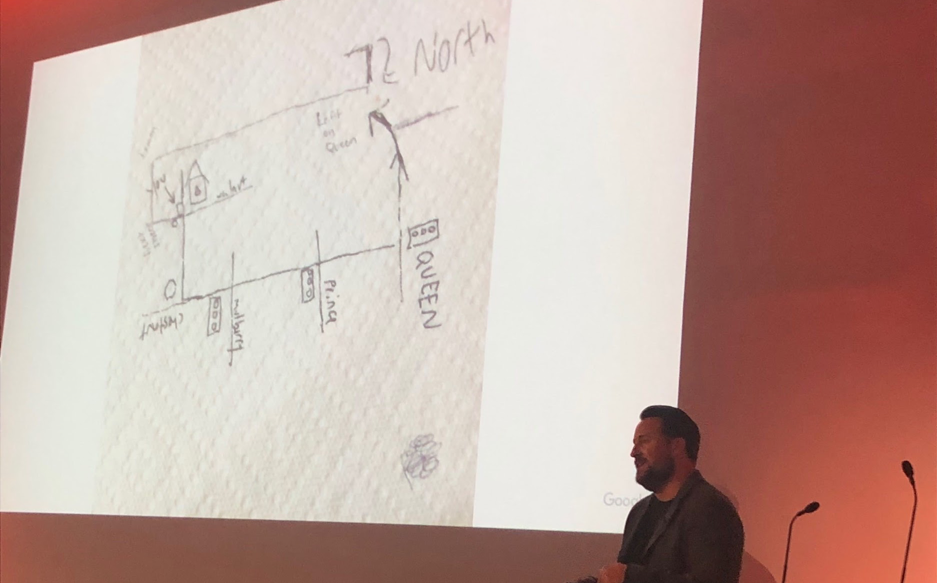 Skip Alums, UX Manager at Google, showing an example of how you would typically give directions to someone.

A focus on people, context and culture can provide a bit more insight on how someone might react to, interpret or feel about a message. However, Emotion is a mental state that depends on many things that are unknown to the designer including the user’s thoughts, feelings and behavioural responses. Emotions are also difficult to measure. Designers should be aware of the difficulties of designing for emotion and realistic about what it can achieve.

If people are worried about how they’re going to pay next month’s rent, whether a design can trigger positive emotions about their finances is debatable. Triggering positive emotions about people’s finances is challenging. As designers, we can certainly create ways to help people manage and understand their finances better and create a more positive experience. Small incremental improvements can certainly be achieved and are worthwhile as some of the examples presented at the FinTech Design Summit 2019 explored above show.

Graham Odds · 5th  Sep 2016 · 5 min read
UX Poland 2018
Article provides an overview of trends in UX from the UX Poland 2018 conference, that arguably will be an important part of the UX Design industry in the coming months and years. Topics include promoting honesty with simplicity in our design, cross-app integrations, and the rise of progressive web apps as the future of mobile experiences.