What is Reactive Programming?

According to André Staltz, author of the library Cycle.js, the reactive paradigm is programming with asynchronous data streams (André Staltz, Github). It is programming concerned with data that “flows” from a source to a sink and changes over time. For example, a user could press on the screen of their mobile device and generate click events. These events could propagate, or “flow”, through the app, being manipulated by various pieces of code, until they trigger changes in the user interface displayed on screen.

Reactive programming is tightly coupled with the observer design pattern. The observer pattern defines two types of object: the subject and its observers. The subject creates a series of events, or data flow, and notifies its observers of any changes. The observers need to subscribe to the subject in order to receive updates to the data. This creates the idea of data “flow”, also known as a data “stream”.

Let me use an example to explain. Suppose you have a button which can generate onClick events, like in the diagram below. 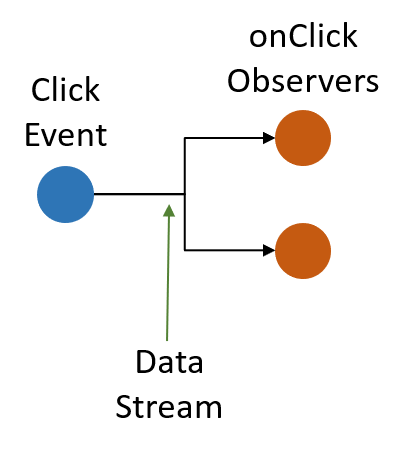 The button is the subject, which generates an onClick event on the left. On the right there are two observers, which are onClick listeners. The white arrows represent the data stream from the event to the listeners; this can be manipulated en-route.

Here is the same example in Kotlin code. Kotlin is a JVM language promoted by Google for Android development and is arguably a codification of Java best practices.

A data stream is a concept that arises from a series of connected objects that propagate changing data from one object to the next along the chain. In this sense data “flows” from one object to another, creating the idea of a data “stream”. Because they represent changing data, streams are observable and can typically have at least three standard transformation operations performed on them; merge, filter and map. As in the example above, streams are similar to click events or event buses but differ in that they can contain any arbitrary objects. Another feature of streams is that they are immutable, therefore when a stream is observed or transformed it completes and a new transformed version of the stream is created.

In Android, LiveData is an example of an object that implements the reactive paradigm. It allows events to be broadcast to its observers as its input data changes over time. This makes it ideal for handling API requests asynchronously or other stateful data. 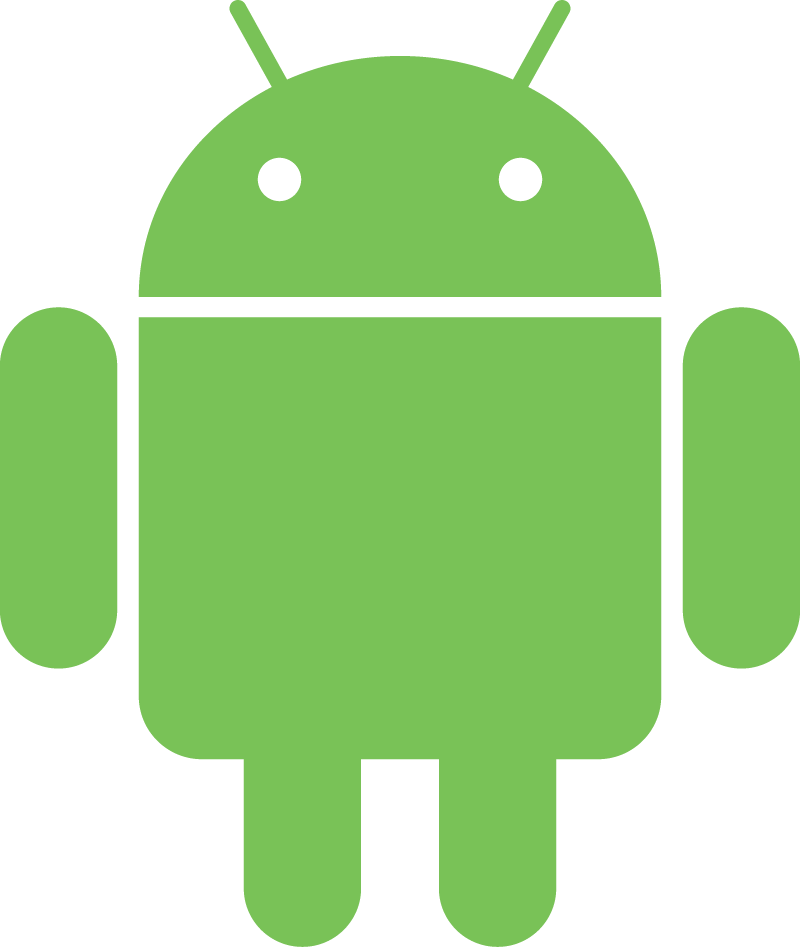 This diagram depicts a more complex series of data streams that involves mapping and filtering operations.

The LiveData contains a float which can change over time. When the value changes, this new value is sent to the mapping operation round to int. A new, transformed, data stream is created and the associated value is propagated onwards to the filtering operation filter to even. The value is only passed onwards if it passes through the filter, otherwise it is blocked. Finally the value arrives at the observer print number.

Here is this example in Kotlin code.

Firstly, we must set up the stream.

Now we have our data stream set up, we must generate events to demonstrate it.

This code will produce the following output.

As mentioned above, LiveData is excellent at handling data from API requests that may have multiple states. A good example of how to effectively use this is with a custom “resource”, an object which contains both state and data, an idea suggested by the Android Jetpack guide.

Here is an implementation of this Resource concept. This utilises Kotlin’s sealed class which is essentially an enhanced enum class, but instead of enum states each state is an entirely new class. This allows each state to contain its own data and functions.

This can be combined with LiveData to produce a powerful mechanism for handling API events.

In Android, this API request would be done a data layer within the architecture; the response would be propagated up to the view layer where it could be handled like this.

Kotlin has many great language features, and I encourage you to go and explore the language. One such feature is a typealias which allows one complex type to be represented by a simpler alias.

As a Java class, LiveData does not offer null safety out of the box, which is arguably a problem when working with Kotlin. This means that, in contrast to the rest of Kotlin, the value of a LiveData<T> instance can be either null or of type T. One potential solution to this is to create a non-nullable wrapper. Here is a simple example of this.

While this would be a useful solution, it would be far better if it was implemented within the Android framework itself. Android is under rapid development so perhaps as Kotlin gains prominence among developers this may happen.

Reactive programming is a powerful technique for handling data that changes over time, or time-bound events. It is therefore great for supplying up-to-date data to a UI and is widely used in Android as a result. However, reactive code is often harder to read, maintain and test as it does not follow a sequential pattern. While some advocate for using this paradigm for everything, arguably it is prudent to weigh up whether or not it is appropriate for your situation.

“The Android robot is reproduced or modified from work created and shared by Google and used according to terms described in the Creative Commons 3.0 Attribution License.”

Kotlin: Practical Experience
Kotlin is the latest JVM-targeted language to see a 1.0.0 release. Having experimented with it for a short while I thought I would capture my experience and point out a few gotchas.

James Porter
Hi, I'm James. I am a software developer working on applications across web and mobile. I enjoy exploring new technologies and experimenting with agile processes to increase team performance. Outside of work you can find me hiking in the Lake District, playing board games and discussing politics with friends.