SwiftUI is a new UI framework currently in beta and will be released officially with Xcode 11 which requires macOS Catalina. This will be released this Autumn, probably within the next month or so. Apple describe it like this:

SwiftUI is an innovative, exceptionally simple way to build user interfaces across all Apple platforms with the power of Swift. Build user interfaces for any Apple device using just one set of tools and APIs. With a declarative Swift syntax that’s easy to read and natural to write, SwiftUI works seamlessly with new Xcode design tools to keep your code and design perfectly in sync. Automatic support for Dynamic Type, Dark Mode, localization, and accessibility means your first line of SwiftUI code is already the most powerful UI code you’ve ever written.

What does this mean?

Let’s look at some of this in a bit more detail:

SwiftUI is an innovative, exceptionally simple way to build user interfaces across all Apple platforms with the power of Swift.

The key take away from this sentence is that the release of SwiftUI is aimed specifically at Apple platforms. Historically Apple have stuck with developing and promoting their own systems foremost to encourage the purchase of their hardware, and this latest technology is no exception.

However, the modern age has seen the rise of open source software and the decline of brand loyalty, with many users daily transitioning across platforms and operating systems (Android phone to a Windows desktop to an Apple watch). Apple seem to have decided they want to push Swift forward as a language beyond their own platforms. As of 2015, Swift is an open source language and as part of this Apple released Swift binaries for use on Ubuntu. Swift can also be used for writing server code, or as a scripting language.

With this in mind, while Apple are definitely focussing first and foremost on improving the development experience on their own platforms, we may see them breaking out into other areas of the software industry in the near future. Indeed the Swift community has been doing so without them; you can port Swift into Windows and even Android.

The significance of SwiftUI is that it may provide a way into web technology for Swift. Even before it has left beta, the Swift community have created a way of running SwiftUI in the browser - SwiftWebUI. Whether Apple will pick this up themselves remains to be seen, but it’s another stepping stone for Swift towards running on all platforms.

This sentence reiterates that SwiftUI will be one framework across all the Apple platforms - this is in contrast to the current system which has WatchKit for watchOS, AppKit for macOS and UIKit for iOS and tvOS. This is important for developers working in the Apple ecosystem as it unifies the platforms and so eases the creation of an app for all of them. This will benefit Apple by expanding the app offerings on all of its devices as developers find it easier to spread their apps. For example, what may have been originally a mobile app will be easier to put onto AppleWatch.

I believe this sentence also contrasts SwiftUI with platform agnostic frameworks such as React Native or Flutter. SwiftUI is Apple’s answer to the increasing popularity of these frameworks on its platforms, and they want to emphasise that it has the same ease of writing across its platforms as they provide in working between iOS and Android. In fact in some ways it is ahead of these frameworks. Although frameworks such as Flutter and React Native have some ability to write desktop apps, it is unlikely they will be nearly as comprehensive for macOS as SwiftUI will be when it’s released.

This is the biggest change SwiftUI makes to developing frontend applications on Apple platforms. Up to this point, development has been done using Cocoa and Cocoa Touch exposed through frameworks such as AppKit. These are based on Objective-C, with a Swift API wrapper added on top in more recent times. However, development was restricted in a number of ways, including the enforcement of MVC architecture, complicated delegate callbacks for views such as tables and class-oriented programming enforced through the neccesity of subclassing UIViews.

The tagline for SwiftUI when it was introduced in WWDC19 was “the shortest path to a great app”. SwiftUI is presented as a framework which will take care of the ‘basic’ things like creating lists, animating transitions and screen layout, leaving the developer with more time to create the complicated systems that make their app unique and branded. The declarative syntax is what allows this, writing code saying what to do, not how to do it. For example, no longer will you have to play around with delegates and datasources when creating a simple table - in SwiftUI you can simply wrap your views in a List component.

Largely enabled by the new declarative syntax, SwiftUI also provides a much clearer way to control data flow through your app. Using property wrappers such as @State on your properties, you can clearly define the sources of truth that your UI draws from. You can then bind this state to your UI in a similar way to React, leading to clear, state-driven and reactive UI. Alongside SwiftUI, Apple have released Combine, a powerful event processing framework for communicating changes of state.

This change leads into one of the biggest advantages SwiftUI has over any other UI framework: Xcode 11 tools. Xcode is the IDE Apple produce for Swift development on Macs, and is generally the best for creating UI as it is packed full of features. Xcode releases are intrinsically linked to Swift releases, and Xcode 11 is the version being released alongside SwiftUI. Xcode 11 features an embedded simulator with hot reloading of UI for static design, and a ‘play’ button than runs live debug data through your app. This brings SwiftUI alongside a framework such as React for the duration of the development feedback loop. Where it goes above and beyond is not only will writing code update the simulator, but you can also edit UI in the simulator and this will also update the code! 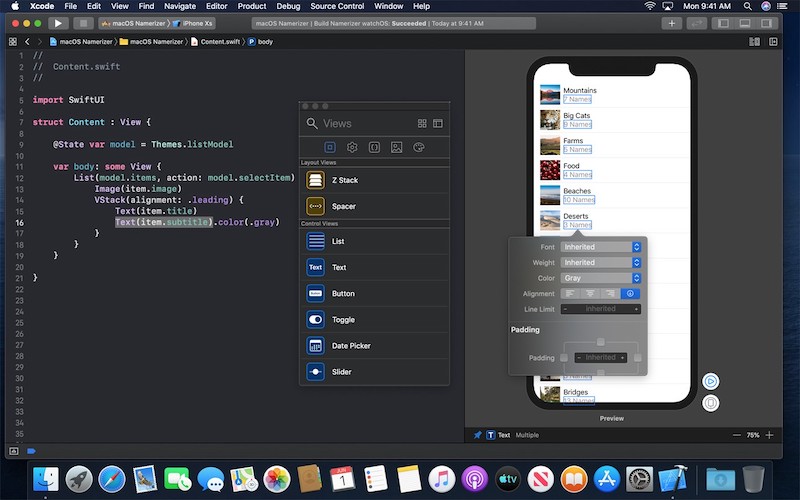 This is a massive improvement on previous UI development done in Xcode. Designs could be created in Interface Builder files called xibs (pronounced nibs) and storyboards, but everything could also be done programmatically, and in fact some things had to be done in code. Interface Builder files are essentially XML, but would statically render an image in Xcode to allow immediate feedback on design features such as layouts. However, you would generally find the design for one View was spread between Interface Builder files and Swift files, introducing complexity and bugs. Keeping the immediate and live design visualisation while also containing all design code in one file will simplify development and help avoid bugs, while hot reloading will save plenty of time waiting for builds to compile onto the simulator or a device.

I hope you can agree with this closing statement having heard in a little more detail the changes coming to UI development through SwiftUI. It is an incredibly powerful framework, and brings native Apple platform development back up to the standard of its competitors, and even ahead in some ways. I’m very excited to start working with SwiftUI when it’s released. Watch this space for more posts exploring it in the future!

Exploring SwiftUI Part 2: State management inspired by React
In this post I look at how SwiftUI manages state with Combine, and how it compares to using React with Redux. SwiftUI is Apple's new declarative UI framework for developing UI natively, while React is a declarative UI framework for the web.
Benedict Quinn · 6th  Jan 2020 · 9 min read
4 things I learned to love about Swift
When first learning to develop in Swift, there were many cases in which I would become frustrated at some of its unique features. However, the more I learned about Swift, the more I realised these features weren't so crazy after all.