On the dangers of sending your testers to conferences

In total, 5 Scott Logic testers attended Testbash Manchester this year. We were there in every capacity from green-shirted volunteers, to 1st time delegates to 1st time speakers. This is the account of why we went and what we got out of it.

Imagine your testers being exposed to: 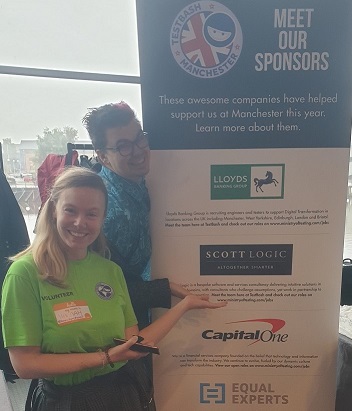 Hannah and Callum notice that Scott Logic are one of the event sponsors. Hooorayyyy!!!

Imagine them bringing those ideas back to your company to:

Now why on EARTH would anyone want to send testers to a conference? 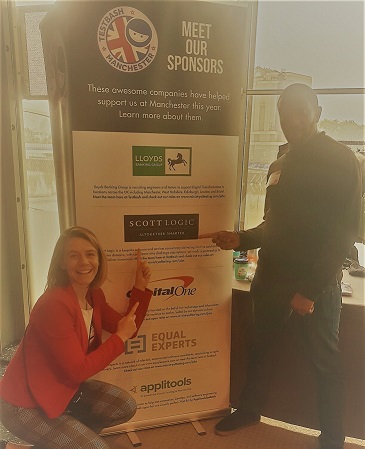 This conference, Test.bash() Manchester is the first-ever testing event I have attended, ever! I didn’t expect to gain as much from it as I did, it helped me gain a real perspective on the breadth of application that automation can have.

It made me reconsider what automation means to me, it’s not just selenium and web driver - it’s innovation and smart product delivery, it’s addressing human bias and easing the delivery of high-quality products. I loved meeting and talking to others in a place where I felt part of that community where everyone was there to share, learn and question.

I was surprised as to how many of the talks I could relate to given I felt I had a limited knowledge of automation. I have returned to work really excited to share with my team what I learnt about microservices, and to share with all my colleagues the really interesting information shared by Emily Bache on DevOps and it’s impact on performance, morale and quality. 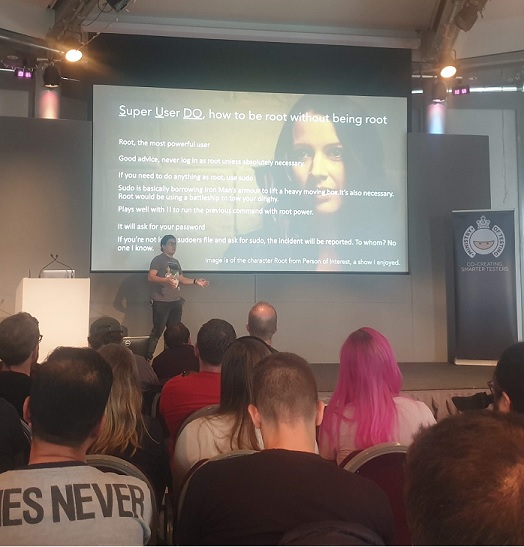 I was volunteering for three days at Test Bash (3 early mornings for a night owl!)in the same month I had just started a new project. However, all of that didn’t stop me from having one of the best few days of my year so far!

On my first day, the Wednesday, I attended the workshops “Contract Testing in Practice with Pact” by Pierre Vincent and “Getting High Coverage Regression Tests Quickly” by Emily Bache. These were too completely new bits of tech for me - so it was a bit daunting at first! Thankfully both instructors and the participants of the workshops were super helpful.

I’ve never touched Pact before and didn’t really understand what goes in to contract testing - I now feel a lot more comfortable in recommending this as a tool.

The workshop by Emily Bache was also good fun - despite having never touched Java before. I was sat with two other people who were experienced in Java, which meant we got to all work together. The most interesting part for me that came out of this workshop was the discussions. Approval testing seems incredibly useful for getting quick coverage on legacy code - but would you really use it for new applications? You would also be making the assumption that because the code is already in production, it works as expected.

I won’t go in to conference days, since you will be able to watch the videos yourselves in The Dojo when they come out. As always, my absolute favourite part of the Test Bash days were the networking events. It is so exciting to see friends and acquaintances (or even people you have met online!) again and to discuss the days events.

I am wholeheartedly grateful for all the effort and work put in to organising these events, and for companies (thanks Scott Logic!) who enable us to attend. Hopefully see you at the next one! 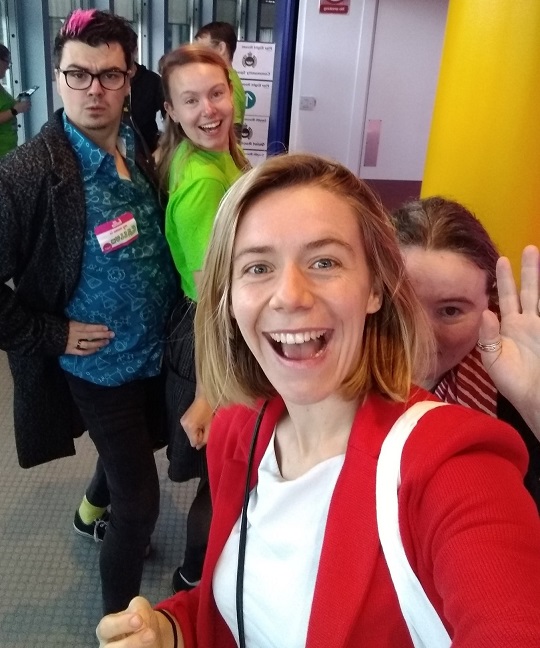 We are here to take selfies and hear talks and we've heard a talk...

For those of us who were getting up on our hind legs to address our peers, the speaker experience at Testbash is 2nd to none. For all the work of putting your research or experience into a talk, they cover your travel and accommodation to get you there. Once there you have free entry to the half day workshops, conference, the UnExpo and the OpenSpace. See here for more information .

Best of all, Testbash are not #PayToSpeak which means that there is no financial barrier for entry for anyone who wants to tell their story or share their research. If you are thinking of submitting, please just do. The care and attention the organisers take to ensure the best speaker experience really shows.

The workshops and talks this year were of an exceptional calibre and there was something amazing to be taken away from every one of them. From thinking more how to gauge how a teaching approach was landing with an audience with the workshops to consider left of centre uses for proxy tools. The replacing the front page of BBC news with the Daily Mail landing page got more a few gasps from the BBC engineers in the audience. 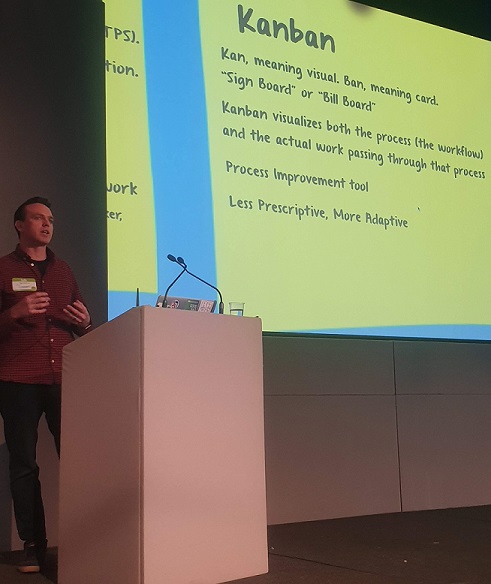 
It is always great to be alongside your peers, to share experiences and feel a part of something. If you were a tester feeling like the lone voice championing quality, conferences such as Testbash are there to enable you to build connections and share experiences regarding our common profession.

I met loads of new people, fellow testers, with shared interests in quality and diversity and I’m going to keep talking to them in order to learn more about these shared causes. I’m going to be another voice championing and advocating to make things better.

So many of the talks were relevant to me, but in ways I didn’t expect. Who knew that what I really wanted was to become a tester that trains AI systems against bias and towards diversity? I didn’t until Test.Bash(); and Bill Matthew’s talk! My understanding of testing has shifted so much, as information has moved away from “I don’t know what I don’t know about” towards “now I just don’t know, but I’m keen to learn more!”


Whilst working on a project for any prolonged duration of time, there may be a tendency for your periphery vision to fade as you focus on the work at hand. Your mind may become fully consumed with the immediate needs of the project. So there is a danger that you could miss out on opportunities and risks present in the vast expanses of the testing universe.

I found that attending conferences such as Test.bash() takes you away from the enclosed space that you may be working within to reopen the wider world of the testing ecosystem.

Hearing speakers present new ways of working, demoing cutting-edge tools and conveying research findings has the positive effect of broadening your thoughts on how you tackle problems and challenges encountered within your current project and future work.

For example, since attending Test.bash(), I have started to evaluate whether the current project would benefit from some of the tools presented including Charles, PACT and Appium. Even if they are not viable options now, then they will certainly be in the frame for future projects.

Conferences also have a great potential for meeting people diverse people face to face – a warm handshake and a conversation rather than a digital click on Twitter. It was at a previous conference that I met some of Scott Logic team, who subsequently reeled me in to working at this great organisation. 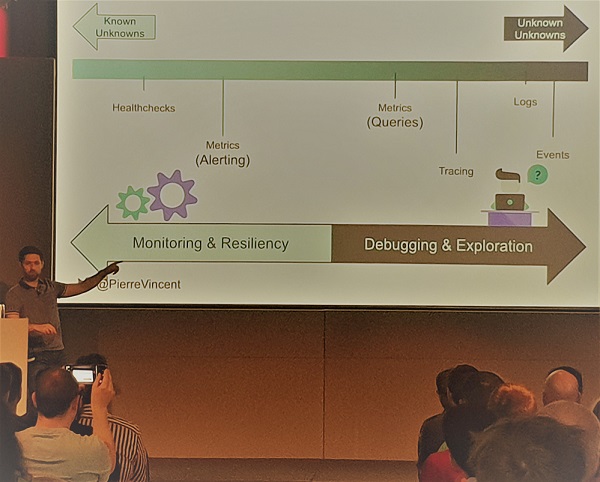 
The talk that resonated most with me was Saskia Coplan’s threat Modelling talk. It was a combination of timing, what’s going on in my working life, conversations with peers and OMG, is that the Death Star in her slides?!?.

Saskia's talk was insightful, passionate and most of all, accessible. I can appreciate the amount of work that has to go into making Infosec look this understandable.</p

All the talks I saw over the 2 days were excellent. I loved the fact that there was a mini-tools track within the main theme with 2 great talks on uses of Charles Proxy and Bash. With a lot of focus going on DevOps and automation, it is good to be reminded of the power of these seemingly small tools in doing a lot of the heavy lifting to help testers out if only they were aware of their capabilities. 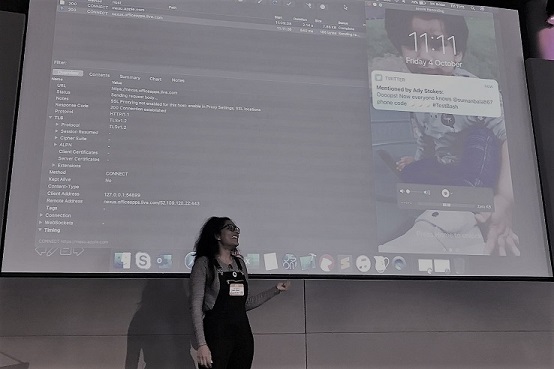 Collectively, the diversity in thinking about testing was really inspiring for all of us to see. Single tech conferences can be great but true appraisal and critical thinking comes from being exposed to a number of ways of thinking about an approach to (as an example) automation.

Between the Testbash and the Testbash() days, we had talks on becoming code confident, the case for record and playback tools and effective use of Appium and Selenium as well as a talk on taking WebDriver out of testing. 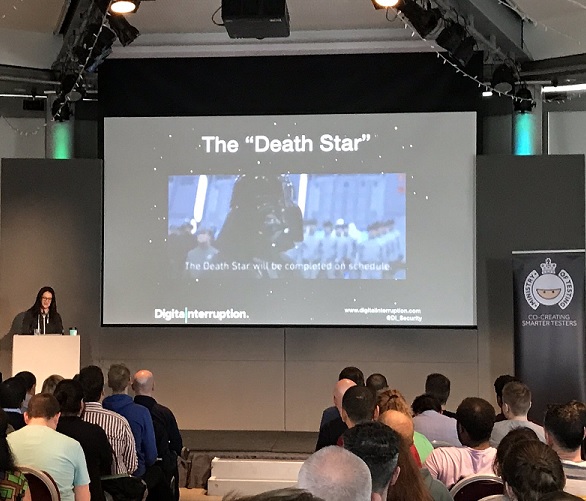 Saskia Coplan's talk on How software survives in a Hacker's universe

DevOps, testing in production, and continuous testing got its representation over the days with talks on how and why to do this shift-right seismic change in mindset and ways of working. Having just done one project that wandered into the land of Observability and about to plan it at a team level in another one, WE all commented on how timely and useful these talks were.

We are all very proud to work for an organisation that promotes the work of testers and good testing practices. We are also very proud that they sponsor events like Testbash and the wider testing communities in Newcastle, Bristol, Edinburgh and London. If you were there this year - hopefully you picked up some of our rather wonderful (even if we say so ourselves) swag. 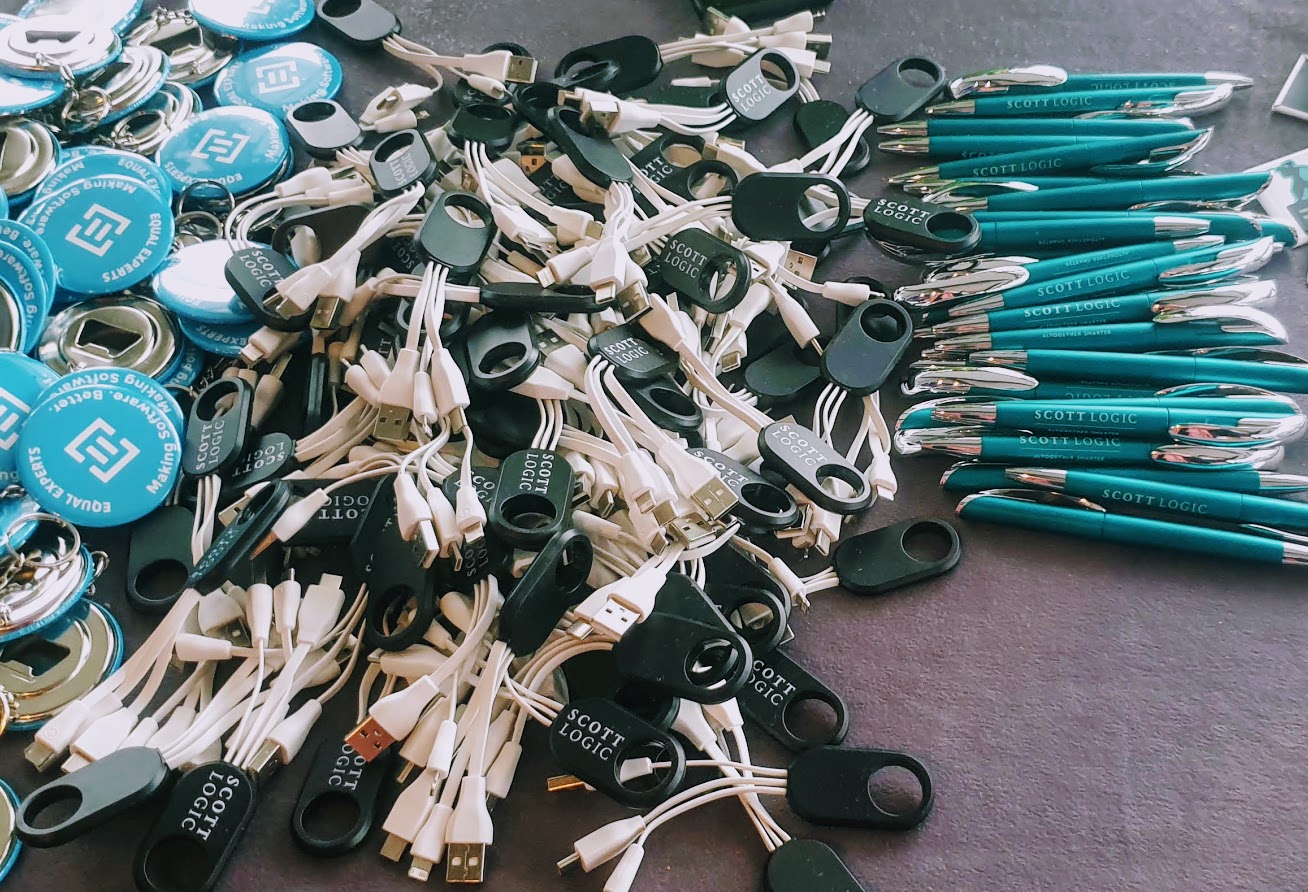 Once Upon A Time, There Was An App Store
Pull up a comfy seat and listen to Chris Price tell a story about the Tortoise and the Hare, the App Store and Progressive Web Apps.

Chris Price · 7th  Dec 2016
An OHLC Chart Component for D3
An open-high-low-close chart is a type of financial chart used to show price movements in a financial instrument over time. In this post, we'll make a reusable D3 component for an OHLC chart series.

I've been in testing and QA since 1998. Yes, we had computers way back then. No, my first tablet was not made of stone.

Since then I got some time off for two people shaped development projects of my own.

I am cat slave to a very large and opinionated Tuxedo Tom who likes walking across keyboards and spilling tea.

For 2019, I am going to continue to use my evil powers for good.

I work as a Test Engineer with a rather odd background in animation. When I'm not bug hunting I like to read, play piano and partake in local theatre productions.