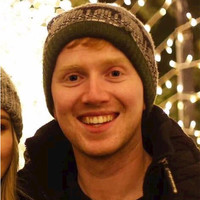 After recently finishing up on a project, I wanted to reflect on my journey, from initially being introduced to API testing to implementing a full API automated test suite in the space of a few weeks. When I first started to implement automated tests, I found resources to be scattered. Rooting through documentation for something that seemed to be so simple was tricky. I thought I’d put together a quick guide on getting basic tests running through the command line with Newman which can easily slot into any CI/CD environment with minimal effort.

For the project, there was a requirement for automated API tests to be in place in a CI/CD environment for continuous testing. Only having experience in UI automated testing, API testing was a new field for me. With new technologies constantly appearing, the list of testing tools available is endless. When looking for an opinion, I got a million and one different tools thrown at me, each one slightly different from the last. As a graduate I found it difficult to search through this huge pile of tech, hoping to pull out the correct one that suited my testing needs.

Having some experience with Postman, I was unaware of its ‘under the hood’ sidekick Newman. Newman gives the capability of running Postman collections through the command line with no manipulation needed to the collection. These tests can be easily integrated with continuous integration systems to provide automated API test coverage. So here we go:

In Postman select “New” -> “Collection”. Name your collection whatever you feel is appropriate. I’ll be using this Dummy API just for the purpose of the demo. 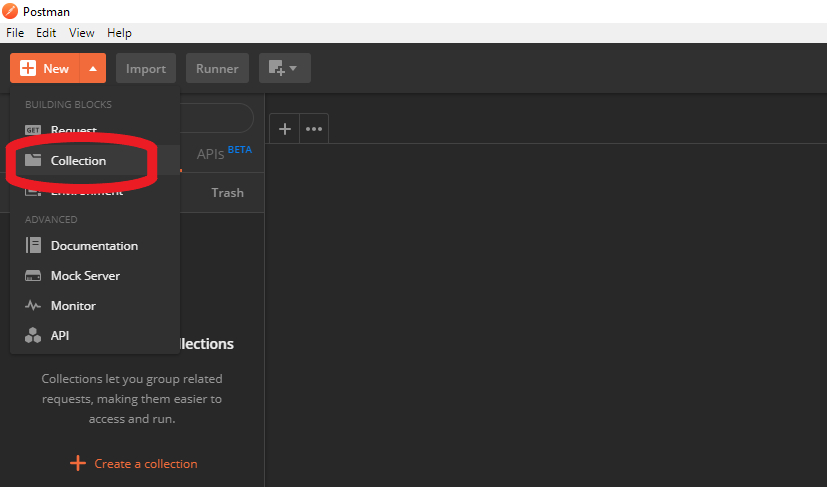 Next, add a request to the collection. As a first pass we’ll use a simple GET request. Right click on the collection name and select ‘Add a Request’. Navigate to the test column and write some basic tests: 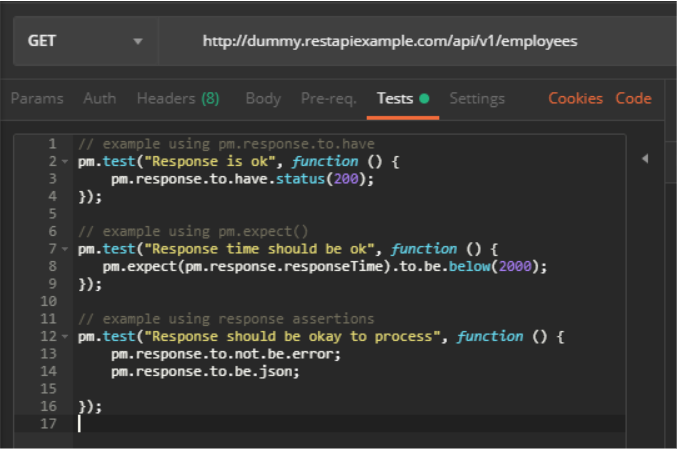 The tests above are basic checks typically seen in Postman tests. We check:

Send the response, making sure that all tests pass. Now for the exciting bit.. We’re going to export this collection and run the same tests through the command line.

Firstly, install Newman (npm install -g newman). Now that Newman is installed, go to Postman. Right click on the collection and select ‘Export’. You should be prompted with this alert: 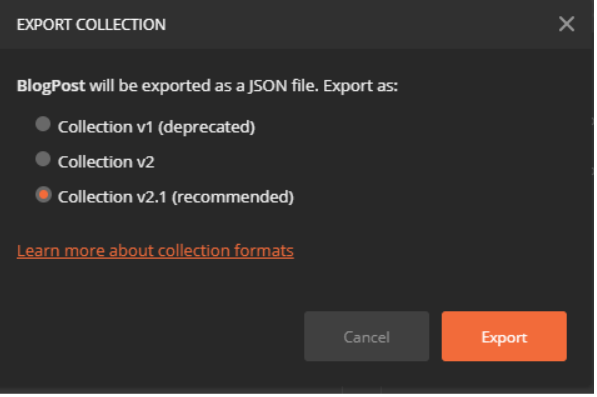 Save it to any directory. The collection should be saved as a postman_collection.json file.

Open a terminal and navigate to where the Postman json file is saved. To execute the tests simply run : 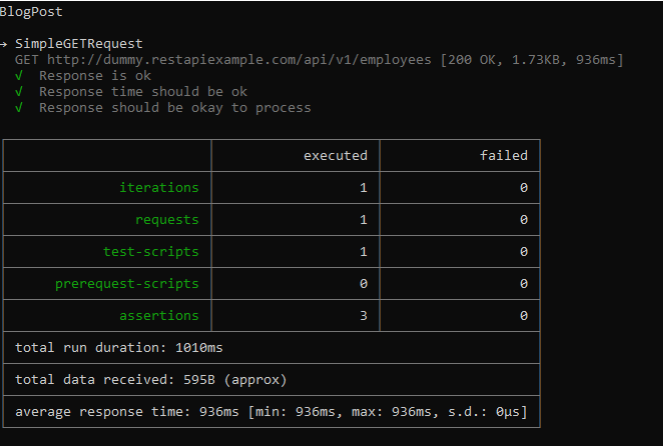 Well no, no there doesn’t. This would lead to multiple collections being needed to run the exact same tests, leading to a huge amount of maintenance. Postman gives us the capability of passing environment variables into anywhere in a request. For the purpose of the tutorial, we’ll pass a variable into a request URL. In Postman, create a set of environment variables. Name the set appropriately to the environment in which you want to run tests against.

Define a URL variable denoting a piece of the actual URL: 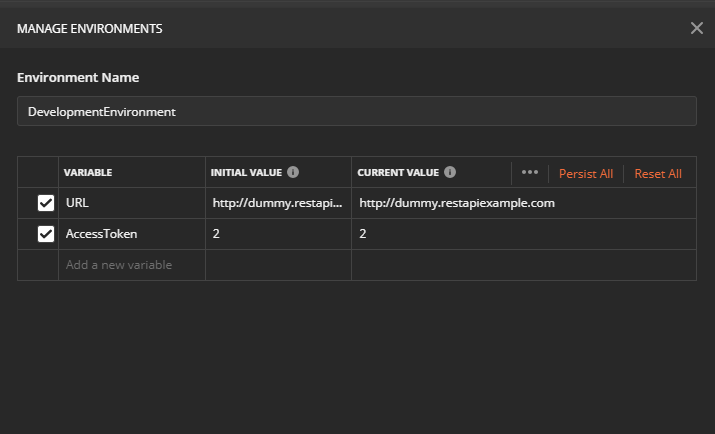 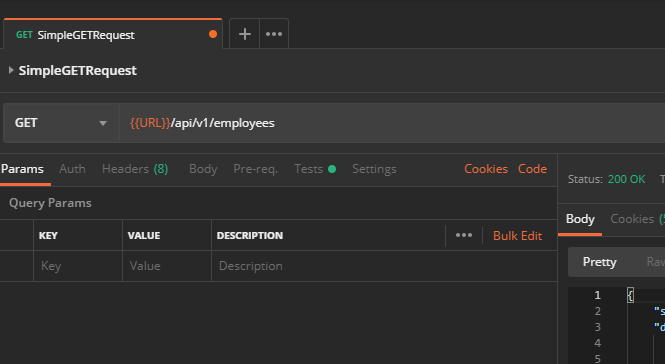 So now that we have our environments defined in Postman, lets see how to pass these values into a collection when running in Newman. We need to download the set of environment variables and save them to the same directory as the Postman collection.

Since the initial Postman collection has been updated as well, we will need to export that again making sure that it is saved to the same directory as the environment variables. Through command prompt, we can now specify the environment we want to run the tests against by passing in the set “DevelopmentEnvironment” variables.

The only change needed for running against a different environment would be changing the command line argument to reference a different set of variables.

Let’s reflect on what we have here. Apart from the point already made on running a collection in a CI environment, we’re now also able to pass in variables. This allows us to be able to run tests against multiple different environments without having re-write tests, only needing to change one argument in the command.

Let’s say we need to attach an access token to our request to hit a specific endpoint. Could we not just attach a token to our tests, export the collection and put them into our CI? Well no, no you can’t. That would work for a while but what the tests would fail once the access token expires. So any access token I attach to my Postman collection to run in CI is eventually going to be invalid.

We need a way of automatically generating a fresh access token and passing it into our Postman tests. In CI terms, we need to be able to generate an access token on every run of tests. Let’s break this down in parts. Firstly, we can easily generate an access token through Postman. How about we create a collection that requests an access token from your service, saves it as a variable and passes it into the tests. For the purpose of the tutorial, let’s see how you’d save some data from a response as an environment variable.

Add a variable to store the access token to the original set of environment variables making sure that it’s the same set of variables as you will use for running the tests. 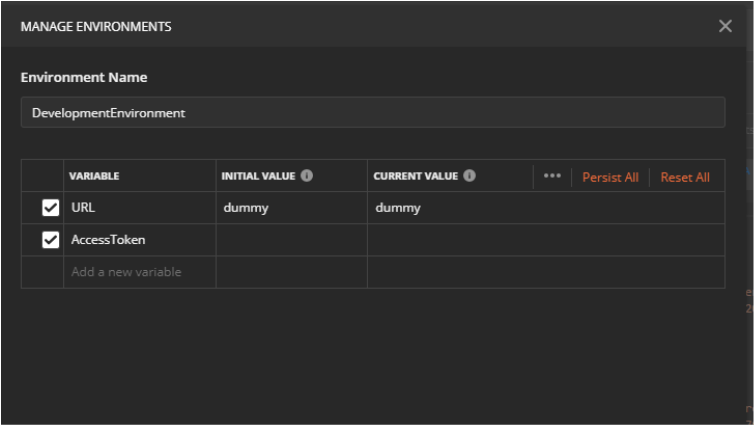 Next, send a request with the correct headers to your authentication service (Again, I won’t go into these details). We’ll send a request and with a value in the response body we’ll update the access token environment variable by using Postman’s function ‘setEnvironmentVariable’. 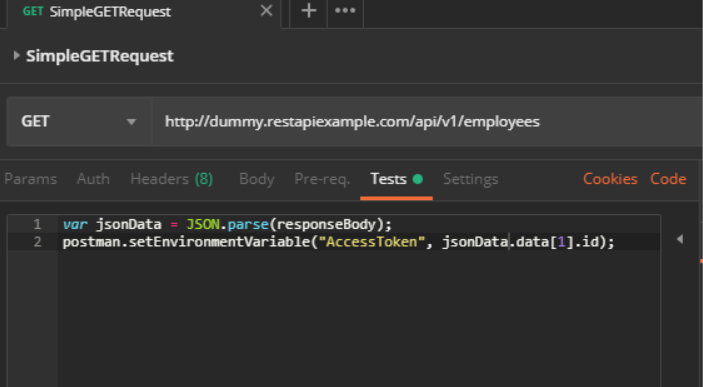 In a real world scenario, to generate a new access token and to the run tests with that new token two postman collections will be needed. One is to generate the access token and the other runs the actual tests. Follow the steps above to request a token from your service and save that it as an environment variable making sure to add the --export-environment argument to update the file. This variable can then be passed to the actual tests and used as a header ``. Example below:

There you have it. A few tips on implementing automated API tests with Newman. These tests are so straightforward to implement and with some tweaking, they can provide a valuable CI/CD solution for continuous testing against multiple environments. API testing provides extreme value in an agile environment, giving the capability of identifying server side defects faster without the need to test a user interface which saves time and resources.

One thing to outline, Postman collection json files can be difficult to read without being imported through Postman. There is no easy way around this only by importing the file through Postman and checking whether the tests pass or fail.

Automating API tests with the power of Postman API
Effective API testing has become increasingly more important with the rise of microservices. In this post we'll discuss how we can efficiently manage our API tests and automate them into a CI/CD pipeline with some of the tools provided by Postman 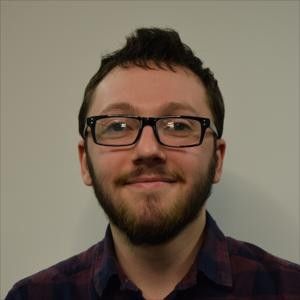 Martin McAlroy · 4th  Sep 2020 · 6 min read
How to integrate end-to-end tests in CircleCI?
Adding a job can look intimidating, for an outsider. Here is how I approached this task to integrate my end to end tests into an existing workflow

Stephen Mangan
I'm a graduate test engineer at Scott Logic in Edinburgh. Since starting, I've taken a big interest in automated testing and testing in an agile environment. In my spare time I enjoy playing music !