At the end of the 19th century, three phase power distribution was established by Nikola Tesla, and the first power station to use this system in the United Kingdom was the Neptune Bank Power Station in Wallsend near Newcastle upon Tyne. This opened in 1901 and by 1912 had developed into the largest integrated power system in Europe.

Following the 1926 Electricity Supply Act, which provided standards for ‘main transmission line’ interconnections between selected stations and undertakings and standardised the frequency of generation, were adopted across all the United Kingdom and so the National Grid was born.

With the exception of The Electricity Act 1989 which began the process of deregulation and privatisation, it is not unreasonable to consider that the power network and its culture of operation in the United Kingdom has remained relatively unchanged for the best part of a hundred years.

However, the 2010 Energy Act required the government to look into decarbonisation and technologies such as carbon capture and sequestration (CCS), and so the Energy Transition was underway; although few would recognise it at the time.

In 2020, the Energy Transition is moving at a rapid pace with relentless acceleration driven by legislation, structural change, consumer and investor agitation and the entry of new highly financed agile organisations looking to create and control new value in the future energy ecosystem. Examples of such organisations include Limejump Ltd, promoting itself to be the energy company of the future and who has now been acquired by Royal Dutch Shell. Also Habitat Energy who provide a “state-of-the-art optimisation and trading platform” for grid-scale battery storage, with full route-to-market capability for wholesale and balancing markets in the UK.

The challenges which now face the generators, the national grid and the distribution network operators (DNOs), are they cultural or technical? It’s relatively simple to produce documents espousing digital strategies but to create a fast moving entrepreneurial culture with leading edge technical capabilities embedded within to create and extract shareholder value from such digital strategies, this will challenge all executive, financial and information officer leadership.

With the next “Revenue Incentives Innovation Outputs” or RIIO pricing controls coming into effect in February 2023, innovation will be incentivised and will indeed be required to meet tough new pricing constraints. The UK Energy Data Taskforce has recognised that legislative powers will be required to drive cultural and technical change in the following two areas:

Adoption of the two areas above (driven by legislation) will cause the market to move and optimization will progress under commercial pressure.

This may seem like mission impossible for the energy companies given their relatively static history, but we have seen this movie before. Starting back in 2015 with the banking sector, arguably in a similar state with technical and cultural challenges, but faced with legislation from Europe for the Payment Services Directive (PSD2) and in 2016 from the UK Competition and Markets Authority (CMA) mandating open access by licenced entities to the bank’s data. We can learn from their experiences and successes! 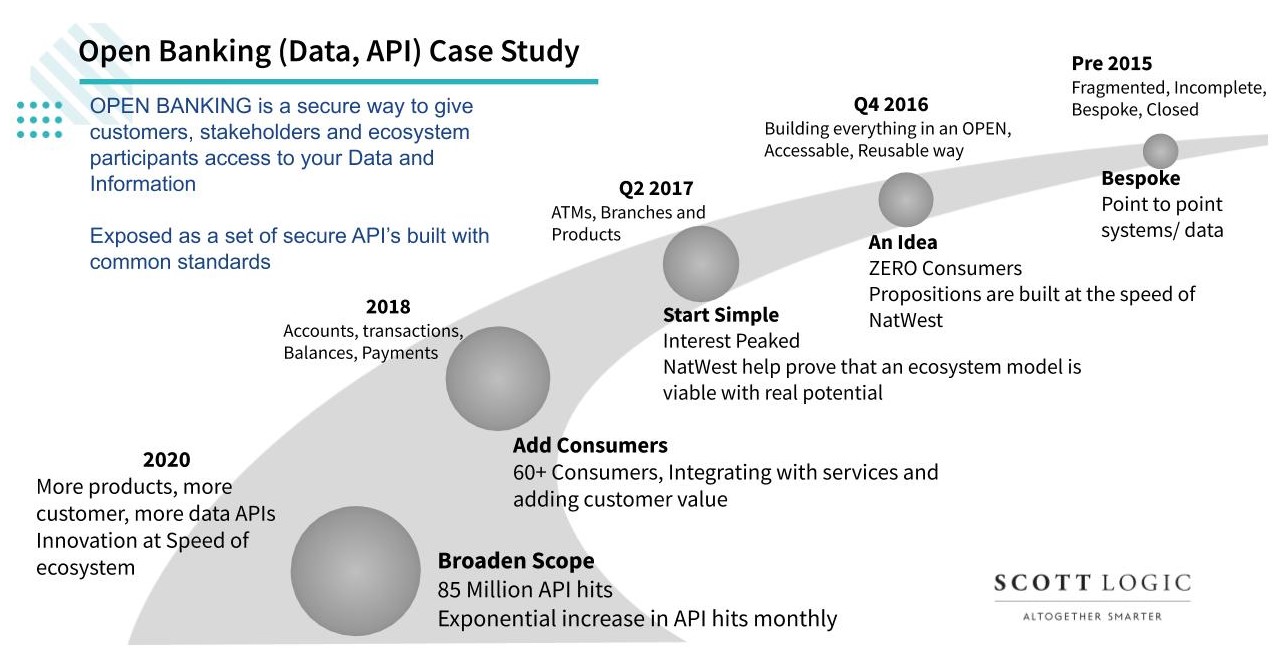 How this shift in data ownership and management was undertaken was just as important as the technology strategies used to deliver value. The folly of a traditional approach and a big bang roll out will simply not work. Mark Fields of the Ford Motor Company quoted the influential big thinkers in management of the time and said “culture eats your strategy for breakfast”. This could not be more the case for power and energy companies and they must use an approach which deploys technology at the same time as addressing culture and resistance to change.

It just isn’t possible to move the entire organisation as one; different areas will move at different rates. So you must have a “trail blazing” team at the front of the organisational change progressing at the fastest rate possible and using technology implementation as the change agent. This spearhead, supported with the trump cards for change by legislation and executive mandate will establish direction, remove technical and cultural barriers when encountered and create a pathway for others to follow and enhance.

Having established and deployed a trail blazing team to enable the transition to open data and the digitalisation of the energy networks, this investment can be leveraged in the next major area of innovation required: the visibility of assets and their data.

Renewable electricity generating assets such as wind and solar have already been built with data connectivity for Supervisory Control and Data Acquisition (SCADA) sometimes augmented with additional instrumentation. Investment programs are also underway for power network asset connectivity such as transformers, switchgear and batteries, the first of which will be connected to the transmission segment in Oxford in August 2020. However the completeness of the data (both historic and real time) and its secure presentation to the open power ecosystem still remains a task to be done using the skills and capabilities embedded by the trail blazing team(s).

At Scott Logic, we have been in the vanguard of Open Banking since 2015. This, coupled with our in depth technical knowledge of some of Europe’s largest energy trading markets (case studies are available for Nord Pool and EDF Trading), creates a formidable partnership capability for the journey known as the energy transition.

If you enjoyed this blog post and are interested in working with smart Developers on challenging software projects, check out our current vacancies.
Peter Hughes

As a Principal Consultant here at Scott Logic, I focus on improving the performance of our clients businesses through the application of modern technologies.

When I am not in the office, you will find me out on the trails having fun on my mountain bike.