Data Fetching in Redux Made Easy With RTK Query

Redux is the most used state management library for frontend apps - 28% of React apps on Github use it! Despite this, there remains one complaint so common it’s almost cliché: boilerplate. Even Dan Abramov, the creator of Redux, complained about this when he returned to a Redux codebase: 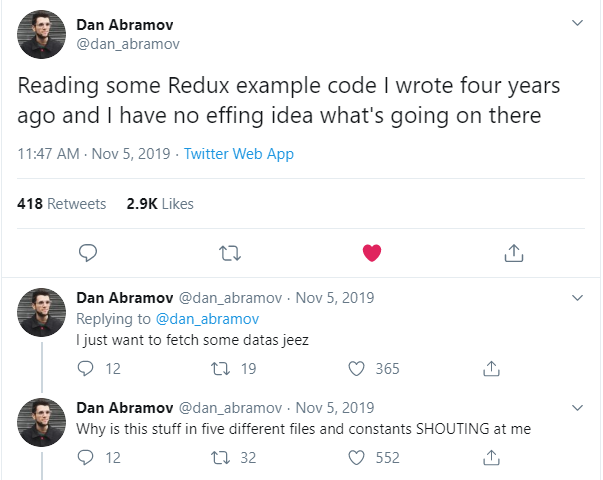 To address this, the Redux team has released Redux Toolkit (RTK): an opinionated toolset for writing Redux applications. Now, they’ve added “the newest member of the Redux family”, RTK Query. RTK Query is intended to make data fetching and caching with Redux as easy as possible. 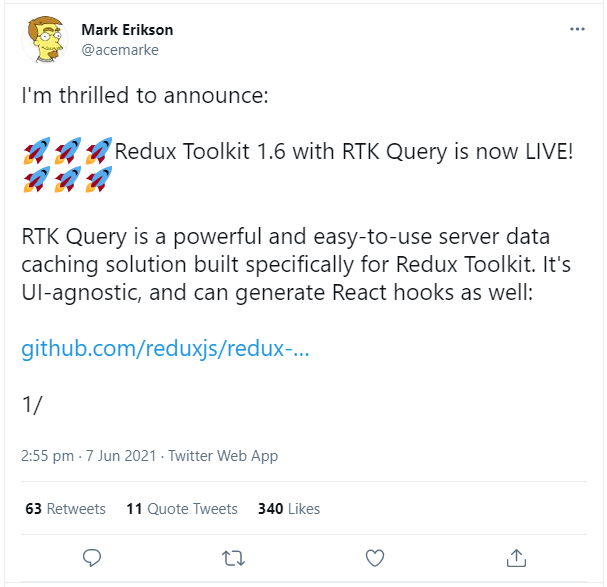 When I first saw the announcement, my reaction was, “That’s cool… but why?” Why would a state management library need to handle data fetching?

In this post, I want to explain why I’m excited for RTK Query and answer my original question, “but why?”

It’s hard in any application, but it’s especially tricky in Redux apps. Redux has no built-in way to handle any side effects, including asynchronous code.

As the docs themselves say, “By itself, a Redux store doesn’t know anything about async logic. It only knows how to synchronously dispatch actions, update the state by calling the root reducer function, and notify the UI that something has changed. Any asynchronicity has to happen outside the store.”

To get around this, Redux provides a space for middleware - a way to intercept dispatched actions before they are received by the reducer. Typically, data fetching is done using either Redux Thunk or Redux-Saga.

That’s where RTK Query comes in. RTK Query is “designed to simplify common cases for loading data in a web application.” Now, instead of potentially five files to fetch data and cache it in the Redux store, we need one.

To see how simple data fetching becomes using RTK Query, here is a basic example of fetching a joke from an API and rendering it.

A lot is going on here, so let’s break it down.

Set up the service

The main source of RTK Query’s functionality comes from createApi. This is where we’ll define our endpoints and allow it to create the API slice that gives us everything we need.

In our example, we pass in an object that defines three things:

Finally, because we’re using this in a React app, RTK Query will automatically generate hooks for each endpoint query (in this example, useGetJokeByTypeQuery). This is done by using createApi from '@reduxjs/toolkit/query/react'.

Hook the service into the Redux store

We hook RTK Query into our app when we set up the Redux store. The API object we created with createApi gives us everything we need:

Optionally, we can use setupListeners, which will enable us to refetch the data on certain events, such as refetchOnFocus and refetchOnReconnect.

Finally, in our React component, we can use the hook we created to fetch the type of joke we want. We’ll be able to see what state we’re in (e.g. loading, error) and get the data once it’s returned.

With the foundations in place, it’s now incredibly easy to expand.

Need a new endpoint? Just add it to the endpoints parameter in services/jokes.js.

But Why Does Redux Care About Data Fetching?

RTK Query makes it incredibly simple to handle your app’s data fetching in a maintainable way. But when I first saw the announcement, I couldn’t help but think that this isn’t Redux’s job. In my mind, you had the “data layer” part of your app, which handles fetching the data. It then passes the data over to Redux, which takes care of holding it in the global state to be used throughout your app.

My lightbulb moment came as I read My State Management Mistake by Kent C. Dodds. In it, he says that if he could go back in time and give advice to his past self, it would be:

“Server cache is not the same as UI state, and should be handled differently.”

Take a look at the Redux store in an app you’re working on now. If it’s anything like mine, you’ll see a mix of data from the backend (which is behaving as a cache) and UI state (the data that isn’t persisted when the page reloads).

These two types of data are treated as if they are the same, which ends up making both more complicated. As Kent explains, ‘I would try and fail at state synchronization. Found myself in “impossible” states that were difficult to debug.’

That’s where RTK Query comes in. It makes it easy to separate the two and handles the server cache, allowing us to focus on the UI state.

Redux Toolkit does an incredible job of giving Redux a much-needed update, and RTK Query is an exciting new piece of that.

To find out more about RTK Query, I highly recommend looking at the official docs. They cover everything you need to know and include an examples page with lots of examples, including using RTK Query with GraphQL and with Svelte.