This post demonstrates how to create an efficient stock ticker app using HTML5 WebSockets and a Haskell server. The stock ticker itself simply shows a list of symbols and prices that dynamically update:

Functional programming is becoming more and more popular and it is not just a passing novelty, it offers many advantages over other paradigms. One important feature is that it lends itself to concurrent programming. A focus on immutable state and pure functions (functions without side effects) both make it easier to reason about concurrent code. The purely functional Haskell is the language I’ve decided to use to write my server. It has several features that make it ideal for implementing a high performance stock ticker:

I want to create an application that displays a table of stocks and their current price. The application should be fast and should support thousands of active users. The prices will come from some external service such as a web service or a database call (for the purposes of this post, I will ignore fetching the price data). As prices will constantly need to be pushed to clients WebSockets are a sensible choice for client-server communication.

The server code has to be fast and support multiple clients. To achieve this, the server code must have the following properties:

Haskell makes it easy to write code that ticks all of these boxes.

In case you have never used Haskell, I’ll quickly outline the syntax which should make the code a little more understandable.

The top (optional!) line is the type signature. It says: “there is a function called add that takes two Int and returns an Int”. There’s a very good reason there is no distinction between the arguments and the return type but for now just assume the last type in the signature is the return type.

The second line is the implementation of add. The arguments are named a and b and the result is simply a + b (there is no need for the return keyword). Functions are called by writing the function name followed by its arguments separated by spaces, there is no need for any parenthesis for example add 3 4 == 7 returns True.

As mentioned above, Haskell supports green threads. These are threads that are managed by the Haskell runtime and not the OS. They are extremely lightweight and it is perfectly reasonable to spawn thousands of these threads without a noticeable impact on performance. The runtime splits the work of these green threads across all cores of a processor.

Threads can communicate with one another using the Chan (Channel) type. This is a FIFO queue that threads can read from and write to. A channel that integers can be written to to has the type Chan Int (analogous to Java’s generic Chan<Int> syntax). There are several useful functions when working with channels:

Here is the architecture that is used: 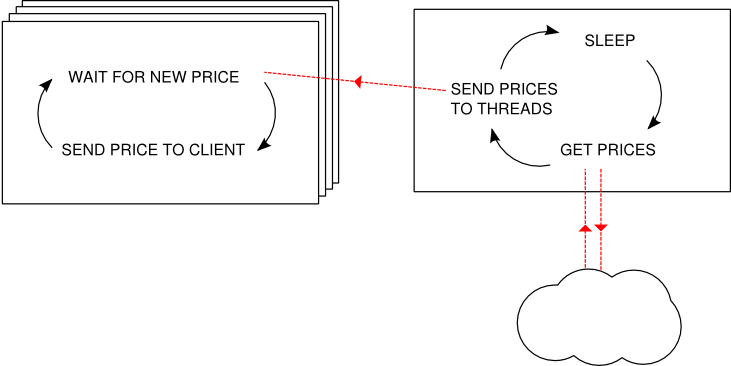 Each card represents a thread. Each connection is handled by it’s own thread. The threads handling the connections simply ‘listen’ for a new price and when they get one, they send it to their client.

There is another single thread that continuously gets the latest stock prices, sends the prices to all of the threads and then sleeps for a little while.

The code starts by importing some modules (which I won’t bother showing) and then I define a type alias:

This lets me use Price to refer to a tuple containing a stock symbol and a price. The first function handleConnection is the function that runs on a new thread for each client that connects:

The lines do the following:

The next piece of code is the function notifyClients that requests the latest prices and sends them to the other threads:

The last bit of code is the main function which is the entry point to the application.

Done! A high performance stock ticker server in 18 lines of code (although I did skip the code that actually gets the prices)! I’m not entirely sure what the aim of this blog post is but maybe it has piqued your interest in Haskell. Its many practical advantages aside, my favourite feature is that it’s fun to use.

Any comments, criticisms and questions are welcome. Full code and instructions on how to run it are available on github.