I recently downloaded run data for the 7,190 athletes who recorded their London Marathon on Strava, a popular platform for runners and cyclists. This blog post visualises and analyses the data in various interesting ways!

I’ve been an enthusiastic (addicted?) runner for about five years now, and if there’s one thing us runners like its data. My next race is Edinburgh Marathon in May, and as a result I am spending far too much time looking at training plans, reading about the 80-20 rule, negative splits, nutrition, pace zones - and just as importantly, finding out what every other runner is up to!

I’ve been a member of Strava for a few years and really enjoy the interesting things they do with their vast quantities of data in their labs, and as a developer, of course I’ve explored their API. While looking at a marathon training plan, it made me wonder, “do people actually follow a plan? and if so, what is it?” - which gave me the idea of downloading the training data for all the athletes who logged their London Marathon on Strava in order to answer this question.

I’ve been grabbing the data and persisting it in a Mongo database, using a combination of D3 and d3fc to analyse and visualise it. So far I’ve obtained the mile splits data for the 7,190 Strava athletes who ran this race - and found some really interesting patterns in the data without having to delve into their training history (I’ll return to that in a later post).

One of the first things I did is to render the pace distribution of all the athletes on a single chart to provide a quick verification that my data was correct (I’d had to do a few tweaks and corrections, converting km splits into mile splits). My intention was to summarise the splits data, however, I found it to be quite beautiful and rich in its most raw form.

Here’s the chart, with all 7,190 lines rendered at a low opacity so that they blend together. The horizontal lines show the speed you would have to run to achieve certain finish times.

Here are some of the patterns that I’ve spotted in this chart:

It’s really interesting the patterns you can see by rendering all the data, rather than summarising it.

The following chart shows the same data, but with the pace data averaged into bands based on finish time: 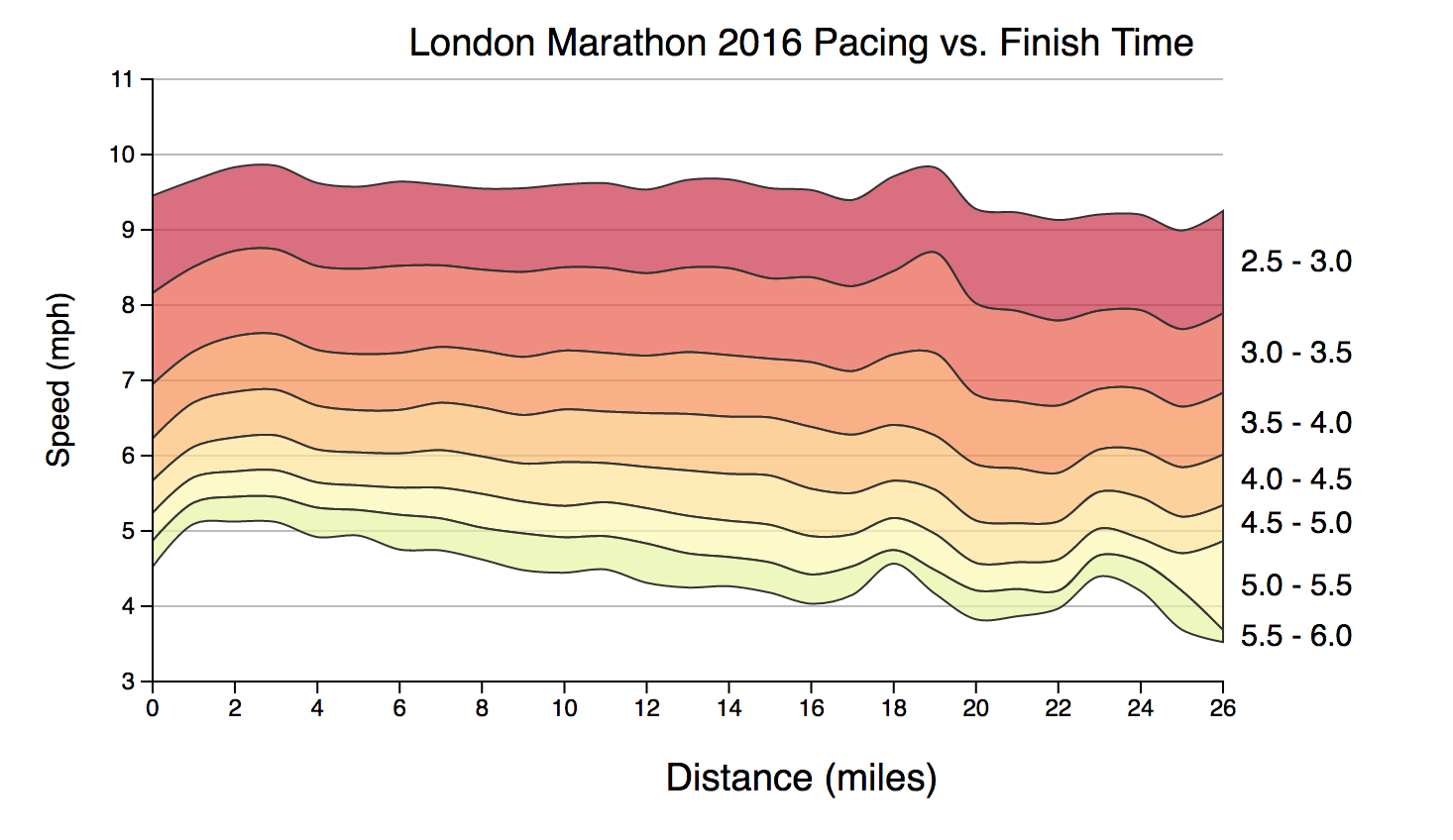 The overall shape of the data is clearer, with faster runners being generally more consistent and holding their pace, whereas the slower runners decline in speed throughout the race.

In the first chart I noted the clustering of pace just above certain target finish times. So just what time did these athlete finish in?

The following chart shows the distribution of finish times for all the athletes: 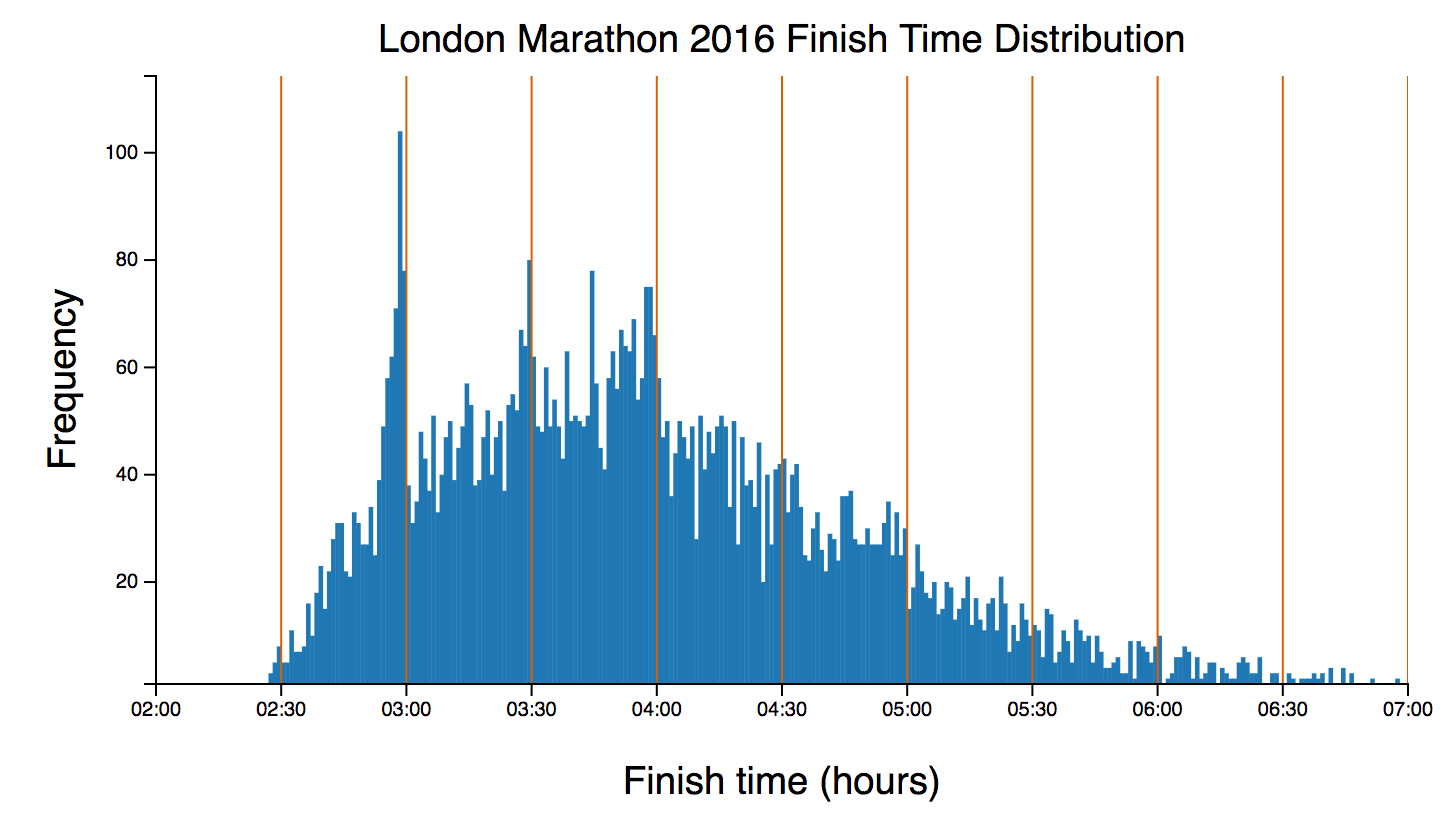 You can see a very prominent clustering of times, just under 3 hours, 3:30 and 4 hours, again, highlighting the popular target finish times. You can also see smaller clusters around 2:45 and 3:15. It’s pleasing to see so many people successfully achieving their sub-3 hour goal (that’ll be me one day … I hope!)

At this point it’s probably worth noting that that this sample is rather biased. Faster, and more serious (addicted!) runners are far more likely to be registered on Strava and recording runs, which is why this chart shows some really impressive performances.

Show me the code

This post is about data and patterns, rather than the code I used to find them. However, if you are interested in the details, these charts make use of D3 and d3fc, which extends the vocabulary of D3 (SVG, paths, lines, etc…) to encompass charting concepts such as series, charts, annotations, while still adhering to the D3 patterns of selections and data-joins.

The use of d3fc made it quite a bit easier to render these charts than if I’d just used D3. If you want to dig into the details, each chart has a link to its source code.

Back to the data …

A well-known race tactic is that of running negative splits, where you run the first half of the race slightly slower than the second. Despite sounding quite simple, it is notoriously difficult to achieve.

The following small-multiples chart shows the split distribution for runners that finished within hour intervals:

You can see that those runners that finished between 2-3 hours, 31% managed to run a negative split, with the most common split being just 1 minute. The fastest runners in a marathon are very experienced and consistent. With each successive finishing band you can see that the negative split ratio rapidly drops, as does the mode (or most common) split time. Running a good marathon is something that takes practice and discipline, it’s not easy!

I hope you’ve enjoyed this exploration of marathon data. If you spot any other patterns in this data, or have an idea for further analysis, please let me know.

I’ll get back to analysing the training data for these athletes in the time leading up to the marathon.

Visualising London Marathon Training Data From Strava
I downloaded an analysed the training data for 1,000 athlete who ran the London Marathon in 2016. From this data I've learnt that people put in ~30% less mileage than popular plans suggest, Sunday mornings are a firm favourite for long runs, and that Saturday morning parkruns are very popular!

Colin Eberhardt · 28th  Feb 2017 · 4 min read
How data has improved the amateur runner
As a keen amateur runner that somehow found themselves with a qualifying time to stand on the start line of the Great North Run with the Elite women, I take a look at the main ways data has aided my journey to that start line. 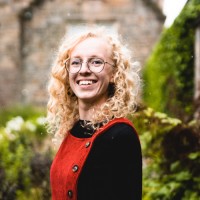