In this post, I tell the story of my recent obsession with the game Minesweeper and discuss why having an obsession can be helpful.

A few months ago, my wife and I were playing a lot of Minesweeper. It was a dark time - I even spent £3.99 for a Nintendo Switch version! When playing a game, I often think about how I’d write an AI for it. Most of the time, I don’t actually implement that algorithm.

This time was different. It all snowballed from there - implementing the solver was just the beginning. Two months on, I can think of at least six side projects that are the direct result of my Minesweeper obsession.

We were on our honeymoon at the time, travelling around Europe by train. That meant a lot of downtime, and I just happened to have a laptop with IntelliJ. 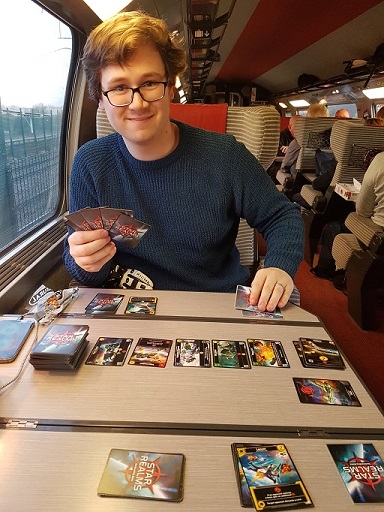 (I did other things too, promise)

My solver defined Minesweeper as a set of constraints. Each constraint declared This set of unknown cells contains between <min> and <max> mines. If you want the details of how it all works, watch one of the talks later in this post or have a look at the Minesweeper Constrained readme.

I did finish my solver, and it worked - but it wasn’t flawless. It never made a mistake, but occasionally it would get stuck in a situation that I could solve manually. Making things worse, at one point I sat for 5 minutes assuming it had crashed, only for the solver to then report it had processed 5 million constraints! Looking back, this was inevitable given that Minesweeper is NP-Complete.

All in all, the solver was good, and my constraint-based technique worked, but it wasn’t a great bit of programming. I’m not particularly proud of it, so here’s someone’s dissertation on the topic instead.

It was time for Scott Logic’s annual Christmas Lightning talks, and my Minesweeper obsession was in full swing. I knew exactly what I wanted to talk about, and jumped at the chance to indoctrinate the rest of the office! It was my first real Tech Talk, and I was well outside my comfort zone. It didn’t help that everyone kept telling me that Lightning talks are the hardest kind of tech talk!

I spent 2 days straight preparing for this 3 minute talk, which I titled How to solve Minesweeper in 3 minutes. It paid off though - I finished perfectly on time, and the audience really enjoyed it. One member of the audience enjoyed it so much that I was invited to give a longer version at the local meetup, NE:Tech.

If you’re not prepared to listen to me shout for 3 minutes, you can just read the slides on my website.

So, I was invited to give a long-form talk, in a 15 minute slot. I knew from my previous talk that the audience was getting a bit lost when things got complex. Since this talk was going to be even more in-depth, I decided to include audience participation to keep people engaged. Adding audience participation just raised the bar - it’s one thing to understand a talk, but it’s another thing entirely to understand well enough to participate!

I had a week’s notice before the talk, and thankfully had nothing else to do. After spending every available moment working on it, I finished my version of Minesweeper with a few hours to spare. It forced you to act like an algorithmic solver, manually combining and clearing constraints. I called it Minesweeper Constrained, and it served its purpose - though it wasn’t exactly efficient.

You can view the source code on GitHub or try a live version of the game on my website.

With my game complete, I needed to think about how to do the actual talk. I’d never seen a tech talk with heavy audience participation, so I relied on my experience with Improvised Comedy. There were three stages to my plan:

But what theme would I pick for a presentation about clearing minefields? The military-industrial complex, of course!

All in all, my presentation went well. People enjoyed it (including the venue staff!) and I think they understood what I was going for. The main complaint was the number of people (and fire sprinklers) I hit with chocolate projectiles!

Artifact 5: An article about SAT Solvers

While researching Minesweeper solvers, I came across Kaboom, a version of Minesweeper which forces you to play methodically. If you guess unnecessarily, you always lose - but if you’re forced to guess then you’re guaranteed to be correct. As part of that, they had to use a Minesweeper solver to know when guessing was needed. They used a SAT solver, which inspired me to write a blog post about SAT solvers applied to sprint planning.

There were lots of examples of SAT solvers used for Minesweeper - which made it really easy to learn how they worked when researching for the blog post. Any time I got confused, I could rely on the general context of Minesweeper which I understood well. I always knew what they were trying to do, and just had to work out how they were achieving that.

Looking back on my NE:Tech talk, I was embarrassed at how inefficient Minesweeper Constrained was. I knew I could do better if I tried to write an optimised version, so I started looking into Svelte. I was led down a rabbit-hole of svelte optimisation, exploring the intricacies of the HTML rendering pipeline.

This is a whole story in itself, and one I wanted to write about in more detail. You can read all about the optimisation process in my next blog post Slow Code HATES him!

A lot of my recent productivity has been a direct result of my Minesweeper obsession. I don’t mean that I was working any harder or longer hours than usual. I was enjoying it, but I was still working my usual hours. I was more productive because I’d already done most of the work.

By having an obsession, and making any new projects related to it, you end up writing some parts over and over again. It means you can focus on the how. You know what you’re building, what the requirements are, and what is transferrable. You can focus on how the latest project is different, and how you’re going to leverage those differences. 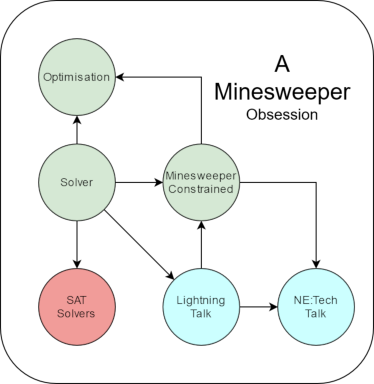 I worked out my solving algorithm in November, and everything since has just built on that.

Having an obsession is great because it means you can do the same thing over and over again in different ways, focussing on how it’s different each time. What will your obsession be?

I’d like to end this post by thanking all the people that supported me through this obsession, giving me progressively bigger opportunities.

Slow Code HATES him! Optimising a web app from 1 to 60fps
After hearing about Svelte, a performance-first web framework, I tried it out in a web-based Minesweeper solver. SHOCKINGLY, it didn't automatically make my code fast - that took a process of iterative optimisation

Steven Waterman · 17th  Feb 2020 · 10 min read
What's quality got to do with IT?
What is quality? Is it "just" testing? If not, then what else? How do you measure it? Should you even try? What does it really mean if you have 1 person or a team looking after the quality? After being told the quality was my new role, I did some research to find out the answers to these questions and more.