A lot has changed in the world of JavaScript and D3 since this post was written. Check out the d3fc project to see what some of the ideas in this post have evolved into!

Comparison charts, as their name suggests, are great for comparing the percentage price change of multiple stocks in time. In this post, we’ll make one using D3.

This post continues a series of posts on making financial charts using D3. We’ve seen how to use the pattern of reusable components to make simple OHLC and candlestick charts with annotations, technical studies and interactive navigators, as well as how to boost performance when panning and zooming.

Here’s what we’ll be making. 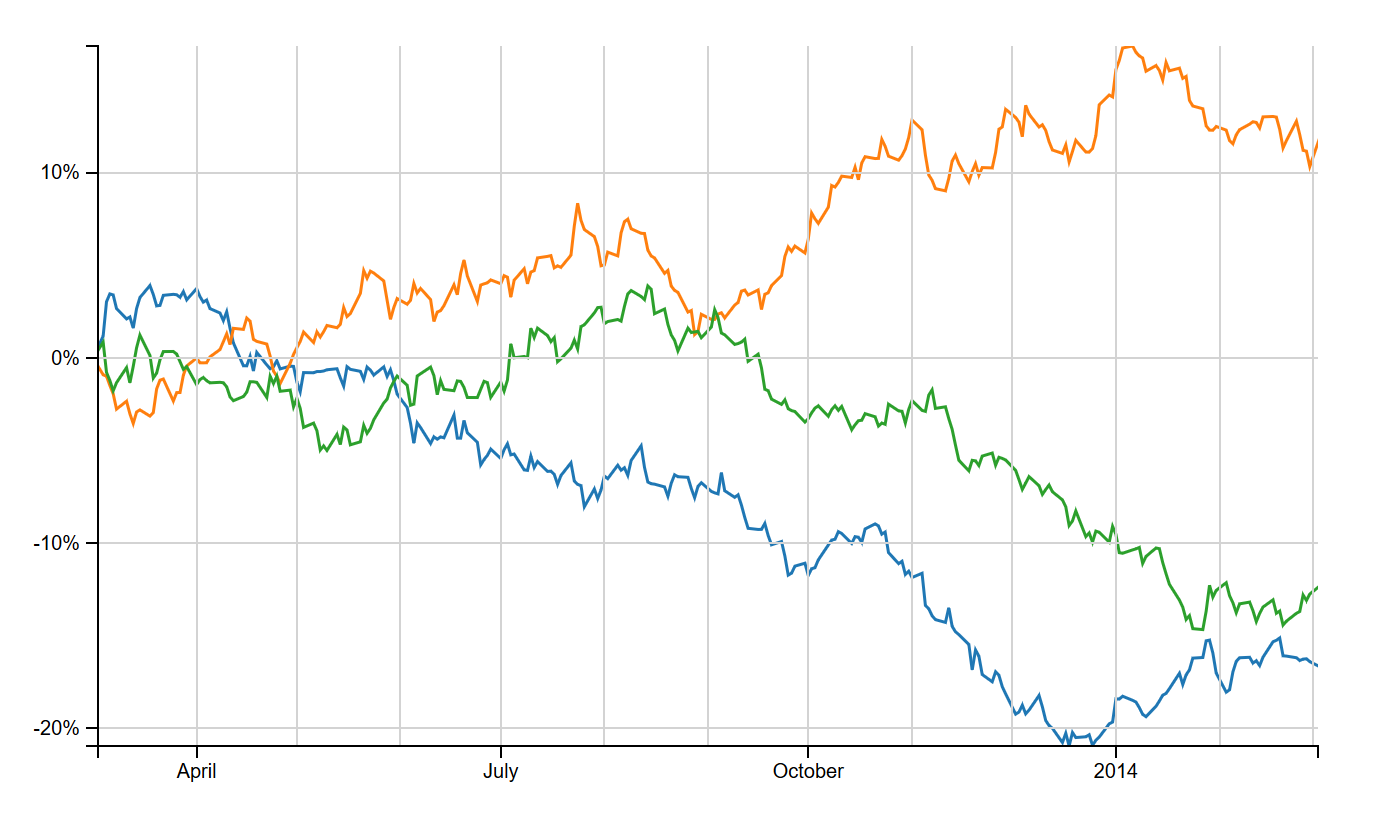 First, a word about data. We’ll assume that our chart data is an array of objects, each with name and data properties. The data property will be an array of price objects with date, open, high, low, and close properties, sorted by date. Our component will plot the percentage change of the close prices for each named series.

We’ll take Mike Bostock’s Multi-Series Line Chart as a starting point. It plots a line for each data series, each with a colour given from a d3.scale.category10 ordinal scale that maps series names to colours. We’ll package the line drawing and colour mapping into a component using the usual D3 component convention. Our component will also need to calculate the percentage change of prices from an initial date (the leftmost date on the x axis), and update the y scale to reflect the minimum and maximum visible percentage changes.

The standard way to draw gridlines with D3 is by obtaining ticks from a scale using scale.ticks(), and drawing lines using the tick values. Guess what? We can encapsulate this as a component!

One of the biggest strengths of the component pattern is the ease in which we can add new components to an existing chart, or swap out components of an existing chart to make a new one. Suppose we had a chart set up with margins, scales, axes, a plot area, and a series (like the OHLC chart from this post). Then we can build a comparison chart with gridlines using our new components very easily.

First we make instances of our components.

Then we add them to the preexisting plot area:

We’ll get zooming and panning working by using a D3 zoom behaviour. We’ll implement semantic zooming, and we’ll use Andy Aiken’s trick of limiting the panning extent by compensating for any overshoot of the zoom behaviour’s x translation. Our zoomed listener looks like this:

Finally, we need to format the y axis to show a percentage.

A disadvantage of geometric zooming was the relative complexity of the implementation compared to semantic zooming with features like an automatically updating y scale. This is true for our comparison series component as well. On zoom, we can’t just apply a single transformation to the comparison series element - the series lines need to be moved independently to their new positions.

An OHLC Chart Component for D3
An open-high-low-close chart is a type of financial chart used to show price movements in a financial instrument over time. In this post, we'll make a reusable D3 component for an OHLC chart series.

Tom Simmons · 19th  Aug 2014 · 13 min read
D3 SVG chart performance
In this post, we'll take a look at some of the performance issues you might encounter when making interactive charts using SVG, and how you might go about fixing them.

I am a Senior Developer at Scott Logic.